What: Shares of Sagent Pharmaceuticals (NASDAQ: SGNT), a maker of injectable drugs, jumped by nearly 40% at the start of trading today on extremely high volume. The catalyst behind this sizable move is the news that Nichi-Iko Pharmaceutical Co., Ltd has agreed to buy Sagent in an all-cash deal for $21.75 per share, or $736 million.

So what: This deal will greatly enhance Nichi-Iko's footprint in the U.S. in terms of its biosimilar and injectable drug portfolios. Perhaps the bigger story, though, is that Nichi-Iko's willingness to pay a hefty premium in excess of 40% for Sagent may signal that biotech and biopharma valuations have now fallen too far, perhaps triggering another M&A bonanza sometime in the near future.

Now what: News of this merger immediately sparked questions about management's due diligence regarding their efforts to secure the best deal for shareholders. After all, this deal is roughly equivalent to Sagent's valuation a mere year ago, reflecting the broad-based downturn among all biotech and biopharma stocks in the interim: 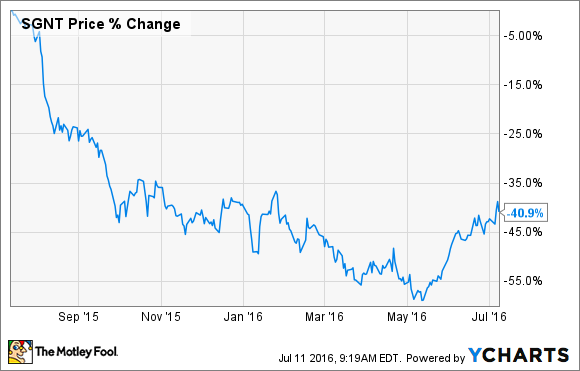 As this deal is scheduled to close in the second quarter of Nichi-Iko's fiscal year that ends in March 2017, these complaints will definitely have time to be heard, perhaps in a court of law. That said, it's highly unlikely that an all-cash deal like this one will ultimately be scuttled, meaning that investors probably shouldn't jump into Sagent today hoping for an even larger buyout offer.