Key accounting rules are about to change, and the fallout will impact every single bank in the U.S.

Following the financial crisis, regulators looked back at the rainy-day funds banks had set aside in the years leading up to the crisis. These reserves proved to be grossly inadequate in retrospect, rising to appropriate levels only after the crisis was in full swing.

The problem was that the accounting rules defining how these reserves are calculated didn't take the future into account. Reserves were set in the present moment, based on past data, and mostly ignored future scenarios.

That's not optimal, and it's why the Financial Accounting Standards Board (FASB) is changing the rules this year. Bank investors should take note. This change will have a huge impact on every bank's income statement and balance sheet.

This change seems technical, but it could be a big deal for bank performance

In technical terms, FASB is finalizing rules for the implementation of the current expected credit loss model, which will impact how banks calculate their allowance for loan and lease losses (ALLL). Currently, FASB plans to implement the new rules beginning in January 2019 for publicly traded banks. Non-public banks will have an additional 2 to 3 years to comply.

Before your eyes glaze over, understand that this could impact a bank's profits by millions and cut its capital significantly. Thomas Curry, Comptroller of the Currency, estimates that this change could drive many financial institutions to raise their ALLL by 30% to 50%. That's a huge increase that will impact every bank following FASB rules.

In a world already inundated with stress tests, regulatory oversight, audits, and legislated ratios to be met, this change to a banal accounting standard could be the trigger that cuts a bank's capital ratios below required thresholds, or moves a profitable year into the red.

Currently, credit reserves are calculated based on the principle of probable and incurred losses. This just means that, in simple terms, banks calculate their credit loss reserves by putting aside a relatively small amount for every loan, and then they add reserves on top of that based on specific loss scenarios as those losses become more imminent. A company may fall on hard times, for example, prompting the bank to increase its reserves for that company's loans as the risk of loss increases. The bank only raises its reserves after problems are uncovered. It's reactive, not proactive.

In the new system, the probable and incurred loss system will be replaced with a concept called lifetime expected credit loss. Banks will now have to consider forward-looking factors determined to be "reasonable and supportable." These models will look beyond probable and incurred scenarios, forcing banks to forecast future economic events and the losses to be incurred throughout the credit cycle.

Many of the tools used in the probable and incurred model will carry over to the lifetime expected credit loss models. Historical loss ratios, vintage data, past economic cycles, and impairment analyses will all remain key tools in forecasting a loan portfolio's lifetime expected credit losses. The primary change, though, is that banks must look beyond the tips of their noses and attempt to forecast how a loan will perform over its entire life, not just for the next quarter or year.

Even the nation's largest banks are not immune. Bank of America's (BAC -4.26%) allowance for loan and lease losses was just 1.28% of its total loans and leases at year-end 2006. That was the lowest ratio for the bank over the preceding five years, dropping 31% from year-end 2002. 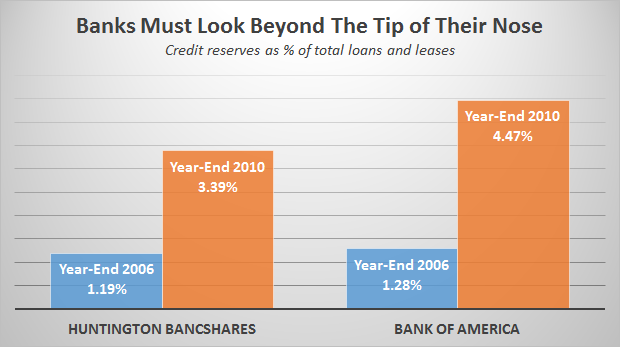 Shouldn't we expect reserves to rise when the economy deteriorates? Certainly. However, these numbers make it abundantly clear that banks held far too little in reserve in the years before the crisis. Reserves absolutely should have increased, but the rise shouldn't have lagged so far behind the economic reality of the time. The new FASB rules seek to change this by forcing banks to think beyond the short term and consider likely loss scenarios in all stages of the credit cycle.

Putting the new FASB rules into a bigger-picture context

Banks have met the rules change with resistance. One group of community bank CEOs went so far as to call the change a "dangerous proposal" that would "harm local economies and cut thousands of jobs." Their logic is that the new rules will drive their reserves sharply higher, hurting their capital positions, profitability, and ability to provide credit to their communities.

This is, in my view, pure hyperbole. For investors, I think this change will be positive in the long term, even if the transition will require banks to change and potentially experience some short-term pain.

In strictly accounting terms, a higher ALLL will lower profitability and reduce capital. At this point, we don't know exactly how much a bank's allowance will actually change, but we can make a rough guess to demonstrate the impact.

For example, Bank of America's allowance for credit losses was $12.7 billion as of March 31, 2016. If that number were to increase 30%, in line with the predictions of the OCC's Curry mentioned above, that would require an additional $3.81 billion in new reserves.

If that hypothetical increase was recorded in the 2016 first quarter, it would have overwhelmed the bank's reported $2.7 billion in net income, creating a loss for the quarter. However, that loss would be a one-time, non-recurring event. Once the new reserves are set aside, the bank must simply keep them topped off over time, just like they already do today.

And, it's unlikely the bank would take that hit all at once. It's much more likely that the reserve would increase over several quarters if not several years. A $3.8 billion increase, as huge as that number is, is not a big deal for a bank like B of A when spread out over twelve or eighteen months. Likewise, Bank of America's 10.3% common equity tier 1 capital ratio is plenty strong to handle the theoretical allowance adjustment without raising concerns.

Like B of A, the vast majority of banks today have balance sheets well equipped to handle the capital draw, and the impact on profitability will be a temporary one. The ALLL will be better funded before another recession even starts, reducing the impact to bank profits at that time and effectively making the change a wash over the long term. In that light, this proposal is not dangerous at all. It's just another change for banks to adapt to.

To me, it boils down to a very fundamental question: Would you rather a bank be reactive or proactive to changing economic circumstances? I'll take proactive every time.

Jay Jenkins has no position in any stocks mentioned. The Motley Fool recommends Bank of America. We Fools may not all hold the same opinions, but we all believe that considering a diverse range of insights makes us better investors. The Motley Fool has a disclosure policy.