Please ensure Javascript is enabled for purposes of website accessibility
Log In Help Join The Motley Fool
Free Article Join Over 1 Million Premium Members And Get More In-Depth Stock Guidance and Research
By Dan Caplinger – Jul 12, 2016 at 11:02AM

Find out what has sent these winners higher and whether they have more room to run.

The stock market has come close to hitting new record highs recently, but it still hasn't pushed much higher over the past year. Major market benchmarks like the S&P 500 and the Dow Jones Industrials are only up about 3% to 4% from this time last year. Yet when you go beyond the indexes to invest in individual stocks, some companies have proven to be much more successful, and investors who found some of the best performers have seen their money double in just a year's time. Below, we'll take a closer look at three of these two-baggers to see if there are more gains in store for those who are only now getting into these stocks. 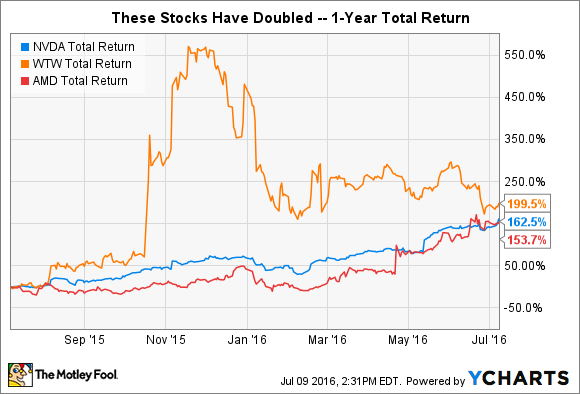 The technology industry is a common source of stocks that post high returns, and NVIDIA (NVDA 1.51%) certainly hasn't disappointed shareholders recently. The maker of high-end graphics cards has seen its stock jump 163% since July 2015, and the stock has given investors a fairly steady ride upward over the past 12 months, with only minor pullbacks along the way that have tended to follow overall market disruptions.

Much of NVIDIA's success has come from its ability to capture even more of the market for graphics cards than it already had. Competitor Advanced Micro Devices (AMD 1.31%), which you'll see discussed in more detail below, has made its own efforts to try to carve out a bigger niche for itself in graphics products. But NVIDIA nevertheless has seen massive market-share gains of about 20 percentage points since early 2014 and now commands four-fifths of the overall market.

More importantly, NVIDIA commands the higher end of the market, and that puts it on the cutting edge of future advances. With the move toward greater centralization of computing power, NVIDIA's data center business has become more important, and in its most recent quarter, the company said that its data center-related sales jumped more than 60%. As long as cloud computing keeps demand high, NVIDIA has the opportunity to keep posting gains.

Top returns often come with huge volatility, and Weight Watchers International (WW -1.22%) is the best example of that fact. Shareholders have seen their stock rise 200% over the past year, and yet there are some who would say that they're actually disappointed by the way Weight Watchers has moved recently.

Weight Watchers' biggest gains came late in 2015, when investors responded very favorably to the fact that celebrity Oprah Winfrey had taken an equity stake in the company, joined its board of directors, and looked to lend her renown and reputation to support the weight-loss specialist. The hype from Winfrey's move sent the stock up more than 550% in the span of less than six months, and subsequent releases showing her progress in losing weight with the Weight Watchers program has led to occasional pops in the stock as well.

Yet Weight Watchers has given back a sizable portion of those gains in 2016, as momentum investors appear to have grown impatient with the company's progress. Recent reports have included big gains in important metrics like subscriber count and meeting attendance, but year-over-year revenue has continued to fall. Even an increase in the company's earnings guidance for the full year wasn't enough to get the stock to move further in the right direction. In the long run, Weight Watchers and Winfrey could be a winning team, but the stock price arguably reflects that potential already.

Whenever stocks move sharply higher, it's important to put the rise in context. Advanced Micro Devices has gained 154% over the past year, which is undoubtedly impressive. However, even after that gain, the chipmaker's stock has returned less than 10% for investors who bought it two years ago, and longer-term investors are still sitting on massive losses.

This time last year, AMD was struggling badly. Falling PC sales had sent the stock sharply lower over the preceding year, and many investors saw little chance for the company to regain its lost profit potential. Even initiatives to focus on semi-custom chips for areas like the gaming console industry weren't enough to offset declines from the core computing and graphics segment, and AMD's losses multiplied from past levels.

Yet since then, AMD has seen some promising things happen. Its new Polaris graphics architecture has a chance to help it fight back against NVIDIA and recapture some of its lost market share in the discrete graphics card market. Advanced Micro also hopes that its semi-custom business will move beyond game consoles and have its chips appear in other applications. Some investors also see promise in the data center business as a new source of revenue for AMD. The company's historical also-ran competitive position still makes some skeptical, but Advanced Micro Devices has at least bought itself more time as it seeks to be more competitive.

Stocks don't double in value all that often, and it's risky to expect more gains after a big jump. For these three stocks, AMD has the most room to turn its business around and produce positive returns, and NVIDIA has the chance to take a leadership role in its industry. Weight Watchers, however, must prove it can build momentum in order to get its stock moving back upward.

Dan Caplinger has no position in any stocks mentioned. The Motley Fool owns shares of and recommends NVIDIA. Try any of our Foolish newsletter services free for 30 days. We Fools may not all hold the same opinions, but we all believe that considering a diverse range of insights makes us better investors. The Motley Fool has a disclosure policy.

1 Semiconductor Stock to Boost Your Portfolio