Under Armour (NYSE:UAA) (NYSE:UA) stock has delivered spectacular returns for investors over the long term. Shares of the high-growth sports apparel company have gained nearly 335% in the last five years, more than quadrupling the S&P 500's 82% gain in the same period. 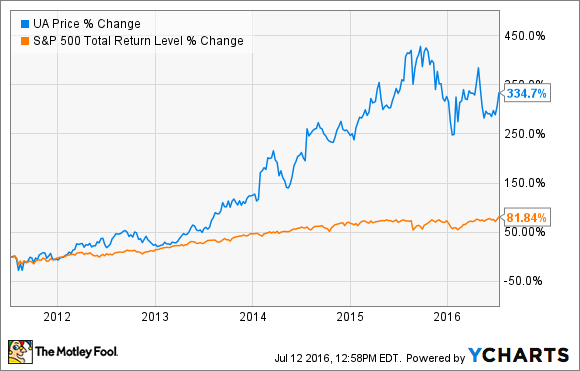 However, past performance is no guarantee of future returns. Under Armour stock is currently priced at a considerable premium, not only versus the broad market, but also in comparison to other companies in the industry, such as Nike (NYSE:NKE), Adidas (OTC:ADDYY), and lululemon athletica (NASDAQ:LULU).

This raises an important question for investors: Does the company deserve such a valuation premium, or is Under Armour stock overvalued at current prices?

Wall Street analysts are on average expecting Under Armour to make $0.58 in earnings per share during 2016. Based on those assumptions, the stock is trading at price-to-earnings ratio above 70. As a frame of reference, the average company in the S&P 500 index trades at a P/E around 19.4.

Sports apparel is a particularly strong niche in the consumer sector. Global consumers are increasingly conscious about the importance of a healthy lifestyle, and this is driving demand in the segment. Additionally, athleisure is a big trend in the fashion business nowadays, meaning that clothing designed for athletic activities is worn in all kinds of settings.

Powerful brands such as Nike, Adidas, Lululemon, and Under Armour are the leading beneficiaries from growing demand in the sports apparel business, which is being reflected in attractive financial performance and above-average valuation ratios for these companies. Still, Under Armour is also trading at a premium versus other players in the sector.

The price of growth

Valuation ratios should always be interpreted in their due context, and companies with higher growth rates deserve higher valuations. All else the same, the faster the growth rate in earnings, the higher the price investors should be willing to pay for every dollar of current earnings.

Under Armour is clearly firing on all cylinders: The company has increased sales at more than 20% annually over the last 24 consecutive quarters. This kind of performance is quite exceptional in the challenging consumer sector, and Under Armour is leaving the competition in the dust.

The following chart compares revenue growth for Under Armour, Nike, Adidas, and Lululemon over the last five years. An image is worth a thousand words, and this graph is telling a clear story. 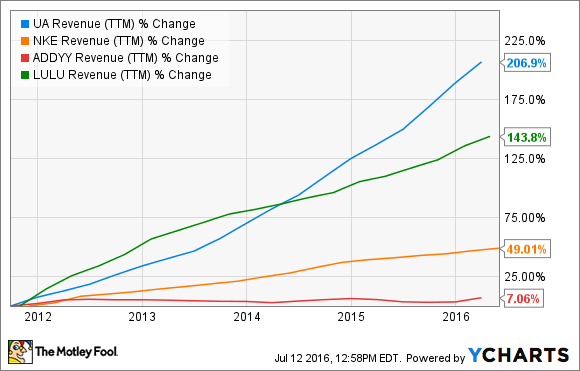 Judging by recent financial reports, the four companies are doing remarkably well, but Under Armour remains ahead of its peers. Nike registered a 6% increase in revenue last quarter, while sales in constant currency terms grew 9%. Adidas reported a 17% increase in revenue, and net revenue at Lululemon also grew 17% year over year. As for Under Armour, total revenue grew by a much more vigorous 30% in the first quarter of 2016.

Under Armour is well positioned for sustained growth going forward, and international markets look like a big opportunity for the company. International sales grew 56% in U.S. dollars and 65% in constant currency last quarter, amounting to 14% of total revenue. Management intends to make 18% of revenue from overseas by 2020, and bigger competitors such as Nike generate nearly 50% of sales internationally. This shows that Under Armour still has significant room for international growth in the years ahead.

In terms of categories, footwear is particularly strong. Footwear revenue grew 64% in the first quarter of 2016 on the back of booming demand for the Curry Two signature basketball shoe. Under Armour is also making big inroads in connected fitness: The company's platforms feature over 160 million registered users, and more than 100,000 users are logging in everyday.

The main reason why Under Armour stock trades at a considerable premium versus the competition is because the company is materially outperforming other players in the business, and it still has substantial room for expansion going forward. As long as management keeps executing well and producing extraordinary financial performance for investors, the company will probably keep trading at above-average ratios, and this should be no reason for concern among Under Armour investors.