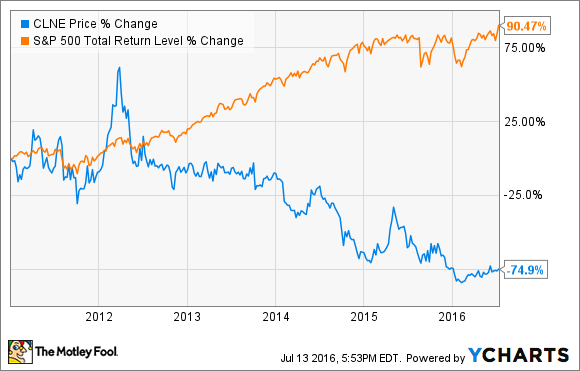 That's right: Since the beginning of 2011, the company's shares have fallen by three-fourths, while the S&P 500 has nearly doubled in value including dividends. SO why is now a good time to consider buying this laggard? In short, because its business fundamentals have steadily improved, even as Mister Market has continued to turn its back on the company. And there are few better times to buy a stock than when the company is on the right track, but the market has yet to catch on.

1. Growth through the downturn

The oil and gas business has been brutal over the past two years, and pretty much every company in the business has taken a beating, dragging investors down along the way: 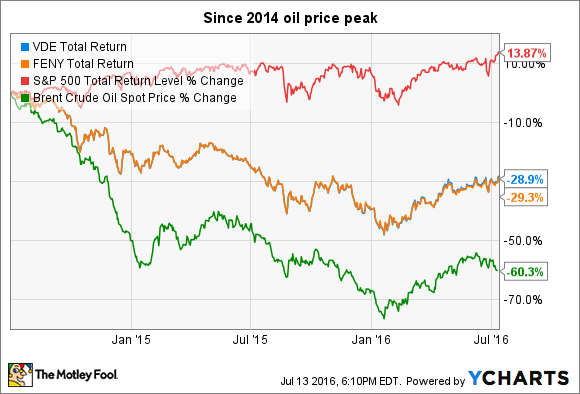 Here's the thing: Even with oil prices falling substantially over the past couple of years, Clean Energy Fuels has continued to grow its fuel volume sales. This is important because the company's core "competition" is gasoline and diesel prices, as a core value of natural gas as an alternative fuel is its lower cost. Here's how much fuel the company has sold over the past three years:

Clean Energy Fuels grew its total fuel volume sales by 24% in 2014, and by 16.4% last year. And while total volume growth slowed to 3% in the first quarter, that's a misleading figure. Transportation sales increased 8%, while volumes sold to utility customers decreased after the company sold its interest in a biofuels production facility.

Bottom line: The addressable market is massive, and even cheap diesel isn't enough to stop the company's growth completely.

Clean Energy started 2016 with a big debt balance, including a large $150 million in convertible notes coming due in August. The company has said that it would pay half with cash and half with the proceeds of stock sales. As of the first quarter earnings call in May, the company had paid off $65 million of that debt (using a lower-cost revolver in the interim) and gone a step further after buying $64 million of its 2018 convertible debt for a big discount.

Put it all together, and Clean Energy Fuels' balance sheet is improving: 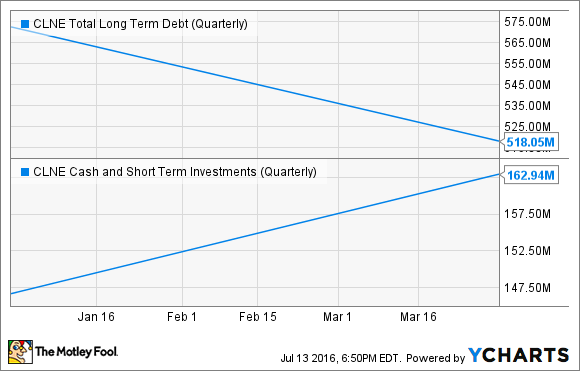 A big reason why the company's balance sheet is getting better is because it's lowering costs and preserving cash to deal with its debt, versus prior years when capital spending for growth was the priority. Sales, general, & administrative expense fell 15% last quarter, marking the fifth consecutive quarter of lower SG&A year-over-year.

At the same time, Clean Energy's capital expenditures have continued to fall sharply: 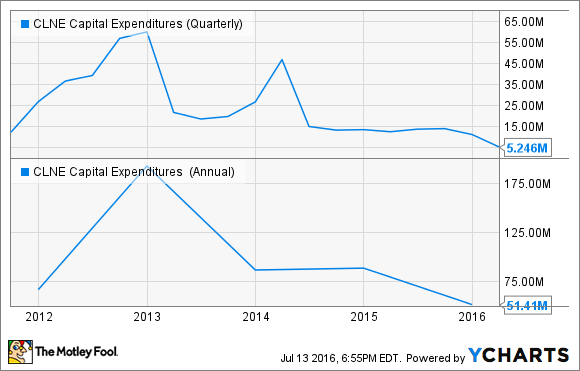 Co-founder and CEO Andrew Littlefair says the company will spend about half as much on CAPEX in 2016 as last year, and will count on its existing station infrastructure to support much of its growth in the years ahead.

Yes, the company probably spent too much too quickly in building its "America's Natural Gas Highway," but management hasn't buried its head in the sand and has taken major strides forward to deal with the debt and cash flow concerns.

3. The market is undervaluing the potential

Don't get me wrong -- I'm not calling Clean Energy Fuels' stock a value play at this stage. After all, the company still has to prove that the business can consistently produce enough operating cash flows to be sustainable. I believe that it is trending that way, based on the evidence, but there's a difference between positive trends and years of historical performance.

But the bottom line is this: Clean Energy Fuels sold 309 million gallons of natural gas in 2015. More than 30 billion gallons of diesel were consumed in the U.S. by the transportation industry. In other words, there's a massive addressable market, and the company has only started tapping it. From a recent Clean Energy presentation: Bottom line: Clean Energy could grow its refueling business multiples bigger and still only have a very small piece of the pie. That kind of easily overlooked business -- one with improving fundamentals, a tiny share of a huge market, and a beaten-down stock -- can make for an amazing investment with patience and time. Clean Energy Fuels looks like it could be that kind of investment right now.