Companies have been instrumental in the stock market rally through share buybacks, but at near-record levels, they are a red flag for value-conscious investors.

This week, The Wall Street Journal published two articles on the topic of stock buybacks. The first one, "Buybacks Pump Up Stock Rally" [subscription required], observed:

Shares outstanding in the S&P 500 have fallen this year from year-earlier levels, on track for the first yearly decline since 2011, according to S&P Dow Jones Indices. Companies in the S&P 500 bought back $161.39 billion of shares during the first three months of the year, the second-biggest quarter for repurchases ever.

The following day, the Journal returned to the topic to reassure investors that "There's No Need to Fear the Buyback-Boosted Stock Market" [subscription required].

This investor disagrees -- there is something to be concerned about. The fact is, many companies lack all discipline when it comes to share buybacks. The following graph from data provider FactSet Research Systems, Inc., offers stark evidence of that observation. The graph displays aggregate quarterly buybacks for the S&P 500 (blue columns) and the value of the S&P 500 index (purple line): 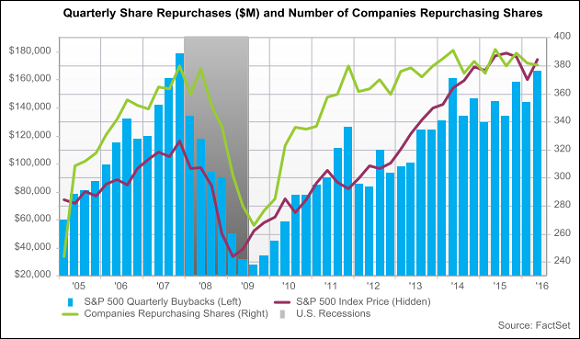 (The green line represents the number of companies buying back shares.)

Note that the amount of money companies spent on share buybacks peaks in the third quarter of 2007 -- just as the market was about to make a top (the S&P 500 achieved its high in October 2007). Then, in 2008 and 2009, as the credit crisis unfolds -- and stock prices become drastically cheaper -- companies sharply reduce their stock repurchases. Call me old-fashioned, but I've always preferred buying something when it's undervalued rather than when it's overvalued.

This year, buybacks hit a new post-crisis peak in the first quarter, nearly equaling the previous 2007 high -- just as most informed observers agree that stocks are fully valued.

Many managements appear to believe all buybacks are created equal and are inherently beneficial to shareholders. However, repurchasing shares is just another option for capital allocation, and the practice is not immune to economic considerations. If a company buys back shares above their intrinsic value, it is beneficial to shareholders -- those who sell the company their shares. In that situation, the buybacks are a transfer of value from shareholders who remain in the stock to those who sell out.

Try to find a company that even mentions the terms "intrinsic value" or "fair value" when it announces a share repurchase program -- they are very few and far between (one prominent exception is Warren Buffett's Berkshire Hathaway Inc. (BRK.A -0.70%) (BRK.B -0.64%), see here, for example). Instead, you'll find plenty of vague statements assuring investors that the buyback "reflects our continued confidence in the strength of our business and its growth prospects," but when it comes down the brass tacks of purchase price versus intrinsic value, there's a deafening silence.

The current near-record level of buybacks is, in my opinion, a red flag, both with regard to the level of the stock market and to the impact on shareholder wealth.

For (much) more on this important topic in corporate finance, I highly recommend the following resources:

Mkts have every reason to love Brexit. Get all kinds of stimulus now, in exchange for an exaggerated threat that is several years away.

Alex Dumortier, CFA, has no position in any stocks mentioned. The Motley Fool owns shares of and recommends Berkshire Hathaway (B shares) and FactSet Research Systems. We Fools may not all hold the same opinions, but we all believe that considering a diverse range of insights makes us better investors. The Motley Fool has a disclosure policy.