The independent oil and gas exploration and production giant has found a buyer for its assets off the coast of Senegal.

After several months of preparation, leading independent oil and gas producer ConocoPhillips (COP -1.85%) is finally making progress on its plan to exit its deepwater exploration programs: On Wednesday, it announced the first tangible step on that road: the sale of its assets off the coast of Senegal to Australia's Woodside Petroleum for $350 million. That's a surprisingly good price given the weak offshore drilling market.

What's next for ConocoPhillips

ConocoPhillips is selling its entire 35% interest in the three offshore explorations blocks, which include the recent SNE and FAN discoveries. SNE is estimated to contain 560 million barrels of recoverable oil, making it one of the largest recent discoveries. ConocoPhillips will not only receive the $350 million sale price, but is expected to net another $80 million at closing to account for some expenditure adjustments. That total is well above ConocoPhillips' current carrying value of $250 million for these assets.

Despite its deepwater divestment plan -- part of its pivot to focus on North American shale extraction -- ConocoPhillips is still actively working on its key prospects, which include a vast position in the Gulf of Mexico and a stake in an exploration joint venture in Canada Atlantic. 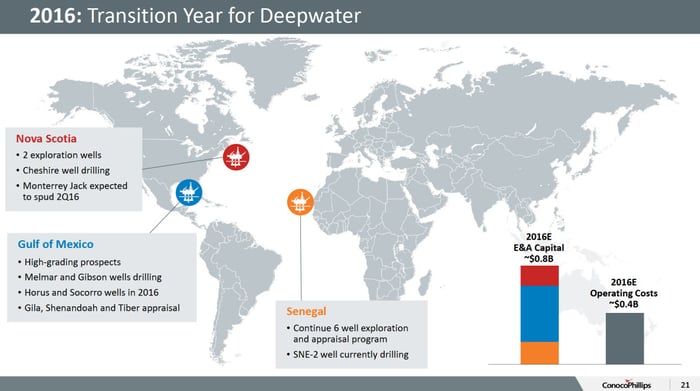 For example, the company is involved in a joint project to drill the Gibson prospect this year, part of a strategic collaboration with oil giants BP (BP -0.43%) and Chevron (CVX -2.59%)  to develop projects in the Gulf’s Keathley Canyon. Those efforts could enable the company to net better prices for the assets, because it will have more data on the resource potential underlying its acreage.

That said, the company does run the risk of drilling a dry hole. That is what happened to it and fellow independent E&P partner Hess (HES -2.91%) earlier this year at their Melmar exploration well. The discovery of non-commercial quantities of oil forced them to plug and abandon the prospect. While that was a blow to ConocoPhillips, its choice to bring Hess on as a 35% partner earlier this year offset some of the loss.

In fact, ConocoPhillips has hit a string of dry holes lately, both in the Gulf and off Angola, which cost its hundreds of millions of dollars and soured it on deepwater exploration. The company has a plethora of onshore unconventional shale assets to develop, which not only carry less dry hole risk but are short-cycle. Unlike deepwater assets, which take several years and billions of dollars to develop, it takes only about a month and a few million dollars to bring an onshore shale well online. By focusing its attention on shorter-cycle resources, ConocoPhillips believes it will have more flexibility to ramp its production up or down depending on commodity prices.

ConocoPhillips hit a significant milestone in its phased exit from deepwater exploration by finding a buyer for its Senegalese offshore assets. Not only did it obtain a pretty fair price, but the sale proves that it has created value from its offshore exploration program. That said, it still has several assets to divest, with the biggest unknown being how it will carve up its position in the Gulf of Mexico. If it can get a fair value for those assets in this market, it would be a real win for investors.

Matt DiLallo owns shares of ConocoPhillips. The Motley Fool recommends Chevron. We Fools may not all hold the same opinions, but we all believe that considering a diverse range of insights makes us better investors. The Motley Fool has a disclosure policy.

Proceed With Caution When Considering This Ultra-Popular Energy Stock
363%