ConocoPhillips announces that it made an offshore oil discovery in Senegal.

While North American shale production is driving most of ConocoPhillips' (COP -0.32%) growth these days, the company isn't just relying on shale to fuel its future. Instead, the company is exploring for oil around the world so that it can fuel its growth once shale production slows down. One of the places it's looking for oil is Senegal, which isn't yet known as an oil hub. That could change as the company and its partners have announced a deepwater discovery 60 miles offshore.

Drilling down into the recent discovery
ConocoPhillips recently announced that it discovered oil at its FAN-1 well. While it isn't yet sure if the well will prove to be commercially viable, the company said that preliminary results were encouraging. The exploration well was drilled to a total depth of 16,164 feet and in 4,700 feet of water. 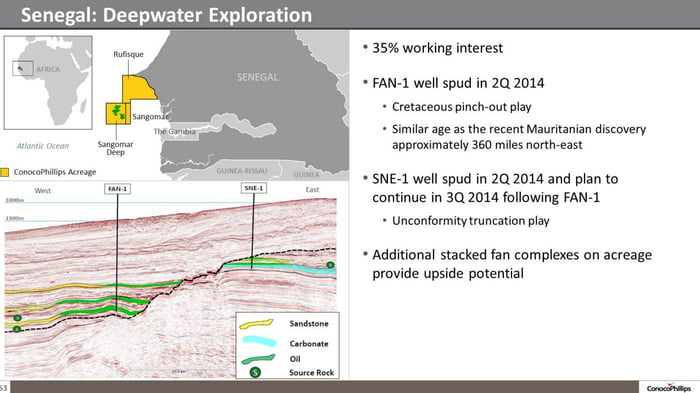 While the company needs to continue to evaluate the results of this well, that's not stopping it from working on a second well as it plans to now focus on drilling the SNE-1 well also located offshore Senegal. If both wells prove to hold economically viable oil then this could open up an exciting new energy producing region for the company and the industry.

Spreading its bets
While Senegal could eventually become ConocoPhillips' next big growth area, the company isn't putting all of its efforts into that one area. It's also not putting all of its efforts into deepwater exploration for that matter. As the following slide shows, ConocoPhillips is spreading its exploration dollars around the world and across many different types of potential energy sources. 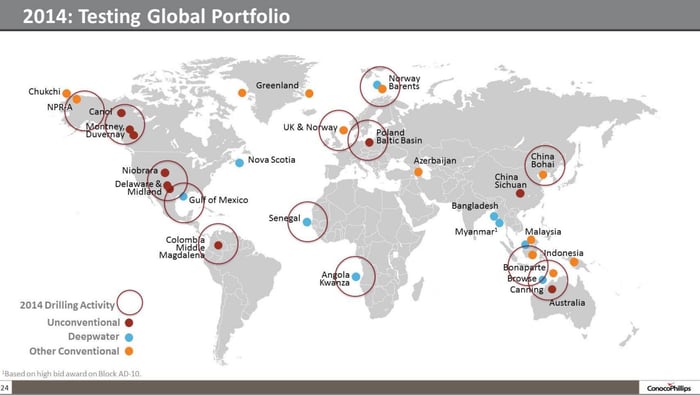 As the above slide notes, ConocoPhillips is investing in deepwater exploration projects in the Gulf of Mexico, Angola, and Norway this year. On top of that it's also looking for oil and gas through conventional means in Alaska, the North Sea, and in Asia. Finally, it's exploring for unconventional resources in North America, Poland, Australia, and Colombia. By diversifying its exploration efforts ConocoPhillips not only is reducing its risk, but should be able to discover a balanced mix of opportunities that will fuel its growth over the next decade.

That being said, some areas are starting to emerge and could deliver growth before the end of this decade. Topping that list is the Gulf of Mexico where ConocoPhillips and its partners have made four recent discoveries. Another area investors should keep an eye on is the company's unconventional exploration and appraisal efforts in North America, especially in Canada and the Permian Basin, as these shale plays have the potential to add near-term development opportunities that could provide a production boost over the next few years. Finally, ConocoPhillips recently doubled its investments in Alaska as it focuses on growing its conventional production in that state as its taking advantage of some unique new opportunities in the state. Combined these opportunities should allow the company to continue growing its production at or above its current growth rate of 3%-5% each year.

Investor takeaway
ConocoPhillips really has a balanced approach when it comes to growth. Not only does this spread the company's risk so that any one failure won't be a big blow, but it allows the company to make early discoveries so that it can establish a dominant position in a new play before many of its peers. It's a strategy that should continue to deliver strong returns for investors as it will keep the company's already generous dividend growing for years to come.

Why Shares in Freeport-McMoRan Soared in January
413%