Nintendo's new mobile app quickly vaulted from relative obscurity to global phenomenon, sending the struggling Japanese game maker's stock sharply upward as well. Pokemon Go was released July 6 and Nintendo's stock has been climbing since, closing on July 13 up 50% from its July 6 close. Estimates of the number of users range past 20 million.

In addition to the game's entertainment value, this overnight sensation contains an important lesson for investors. Let's see why.

What is Pokemon Go?

Released first in the U.S. and Australia on July 6, Pokemon Go surged to become the most downloaded and top-grossing app in both Apple's and Alphabet's Android app stores within three days of its release, an ascent never before seen in either mobile app store's history. The game's essentially a location-based mobile version of the popular franchise. It centers on the same core tasks of finding, capturing, training, and battling with your cadre of Pokemon characters. My Foolish colleague Daniel Kline offers a more comprehensive look inside the game's mechanics and business model in his useful primer on Pokemon Go, so I'll avoid repackaging those details here. Rather, let's focus on the unique investing scenario Pokemon Go creates for Nintendo stock today.

Established multibillion-dollar companies rarely, if ever, see their valuations grow by more than 50% in only a few days; a merger would be the most common catalyst. However, the frenzy stemming from Pokemon Go's never-before-seen popularity has caused Nintendo stock to rally mightily since the game's release. 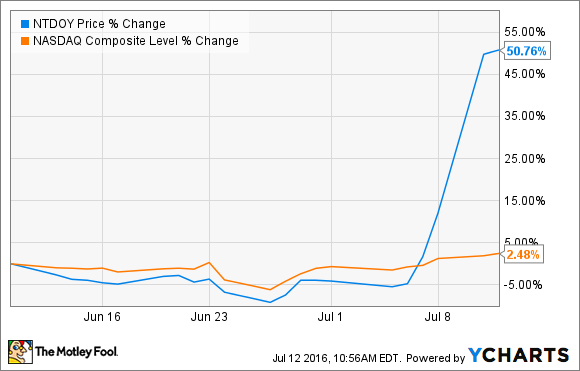 Thanks to its relatively low profile and lack of success in the so-called "console wars" that Sony's PlayStation and Microsoft's Xbox platforms dominate, Nintendo had become something of an investing backwater in recent years . Its stock's beta, a gauge of volatility relative to a benchmark such as the S&P 500, sits at just 0.67; a beta less than 1 means a stock is less volatile than its benchmark index. Put another way, major moves in Nintendo's stock are virtually unheard of, making this recent surge all the more improbable.

The stock's spike, then, is a natural reaction any time demand increases for an item in small supply. The rally, then, has more to do with the trading structure of its shares rather than its fundamentals, and that probably doesn't bode well for the stock over the long term.

Some fundamental analysis further reveals that we probably aren't looking at a financial windfall for Nintendo.

Though the surprise popularity of Pokemon Go will probably increase this estimate, Nintendo's management has said it believed its push into mobile gaming -- which includes an additional five smartphone games through next March -- could help increase the company's operating profit to $450 million this year. However, with Nintendo's market capitalization approaching $28 billion as of this writing, the implied price-to-operating profit ratio of 62 seems rather elevated for a company of Nintendo's maturity. For context, the price-to-earnings ratio of the S&P 500, which reflects expenses not baked into Nintendo's trading ratio, such as taxes and interest expenses, sits at 24. Nintendo stock, then, appears unjustifiably overpriced.

Nintendo has struck a chord with the first mobile game to nail an augmented-reality experience. That's a significant milestone, indeed. However, is it deserving of the massive advancement in Nintendo shares this fad has triggered? Probably not.