Please ensure Javascript is enabled for purposes of website accessibility
Log In Help Join The Motley Fool
Free Article Join Over 1 Million Premium Members And Get More In-Depth Stock Guidance and Research
By Adam Levy - Jul 15, 2016 at 8:29AM

These "catalysts" never resulted in any meaningful revenue for Twitter.

When Twitter (TWTR 1.89%) made its initial public offering, it was full of potential. But after several quarters of slowing user growth, management started pointing to other areas as catalysts for growth at the company. So far, not many of those catalysts have panned out as expected, and there are reasons to believe they never will.

Here are three areas where Twitter failed to live up to expectations.

Twitter has been talking about the potential of its logged-out audience even before it started facing headwinds to its user growth. Former CEO Dick Costolo told analysts during the company's second-quarter earnings call in 2014 that the size of its audience on owned and operated properties was two to three times the size of its active user base. That's when Twitter had 271 million monthly active users (MAUs), having added 16 million net new users on a sequential basis. The company has added just 8 million MAUs over the past 12 months.

The total audience strategy is supposed to alleviate the lack of user growth. The company started monetizing logged-out visitors in the fourth quarter, and the company estimates it to be a $1.25 billion advertising opportunity. 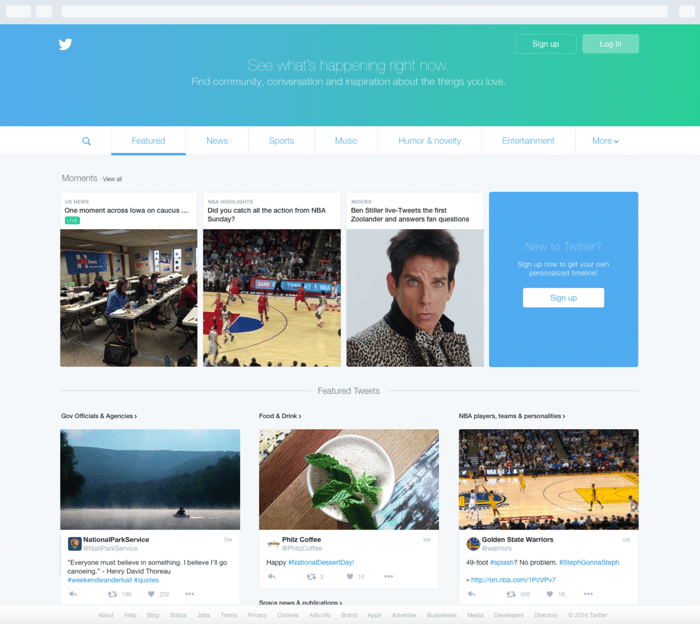 But the revenue growth hasn't shown up in Twitter's results or its outlook. For the second quarter, Twitter is projecting sequential revenue growth of less than 1%, and year-over-year growth is expected to drop below 20%. That indicates that logged-out visitors aren't contributing any meaningful growth to Twitter's top line.

On the company's first-quarter earnings call this year, COO Adam Bain told investors, "We realize that we need to invest more to increase the amount of logged-out impressions and overall scale the offering," implying the amount of engagement from non-users is relatively limited. To that end, Twitter has made several investments recently in live-streaming video content to attract a broader audience to its platform.

Still, the results so far have failed to live up to the lofty expectations the company set back in 2014.

Twitter acquired Vine before it even launched in 2012. The app company was a pioneer in social video, leading Facebook's (META 7.19%) Instagram to follow its lead. However, while video on Instagram and Facebook blew up, Vine's popularity has stagnated. The company said it had 200 million viewers last October, and it reportedly hasn't changed in the last nine months.

Data from comScore indicate that Vine is falling out of favor in the United States, the most valuable ad market, with usage dropping 20% over the past year. Meanwhile, Instagram continues to increase in popularity and other video platforms like Snapchat are growing as well.

Management consistently avoided questions about monetizing Vine until last quarter. COO Adam Bain noted that the company is monetizing Vine's content by integrating it with Twitter's flagship app and allowing marketers to advertise against it in Twitter.

Comparatively, Facebook has successfully integrated advertising directly with Instagram, and analysts expect the app to generate billions in additional revenue for the company within the next couple years.

While Twitter managed to acquire Vine at a relatively low price back in 2012 by buying it before the company launched an app, the lack of monetization or even a path to monetization at this point is discouraging. Adding to that is the fact that the app's popularity is waning.

When Jack Dorsey took over as CEO last summer, he talked about the potential for "Project Lightning" to engage Twitter users and get them to spend more time in the app. Project Lightning eventually became Moments, and Twitter launched an entire ad campaign including television commercials around the new feature. The fact that Twitter threw a marketing budget behind the new feature is a sign of how big the company thought it would be.

However, the results so far have yet to show any dramatic shift in user behavior around Moments. While the feature makes it easier to discover and follow news stories on Twitter, Pew's latest survey found that fewer Twitter users get their news from Twitter than the percentage of users a year ago. What's more, advertisers aren't interested in buying Promoted Moments, a premium ad product Twitter built around the new feature.

After building up expectations for Moments for user growth and engagement, the relative lack of impact on either from the feature is a big disappointment.