Despite a decline in volume and revenue, CSX continues to make improvements in operations and strategic long-term moves.

Ah, the pitfalls of Twitter, a sea of regretful and/or accidental tweets. Not even the largest companies in the world are able to tread the waters of the social networking service perfectly. CSX Corp. (CSX -0.23%) is a fresh example, with an inadvertent tweet containing second-quarter earnings information that was released before market close yesterday and prompted a 5% rise in shares as investors discovered a bit early that the railroad beat analysts' estimates.

The accidental tweet fueled the stock's largest intraday increase since mid-January. But let's set that misstep aside, and dig into the numbers and discuss three takeaways from CSX's earnings release.

Starting from the top, revenue dropped 12% during the second quarter thanks to freight volume dropping 9% and fuel recovery offsetting the company's pricing gains. CSX's operating income dropped 17%, to $840 million, and adjusted earnings fell to $0.47 per share, down from $0.56 during last year's second quarter. Despite the decline in earnings per share, the result was still three pennies ahead of analysts' estimates, compiled by Bloomberg, of $0.44.

"They're managing well through what has been an extremely challenging environment," Edward Jones analyst Logan Purk told the Associated Press.

With those basic numbers out of the way, let's look at some of the takeaways.

As railroads continue to face challenges with weak coal demand -- coal shipments were down 34% in the second quarter -- CSX has proven adept at minimizing expenses in an attempt to offset some of its revenue decline. Expenses declined 9% year over year, a decrease of $183 million, driven by the combination of efficiency -- think furloughed workers and sidelined locomotives -- and cheaper fuel. 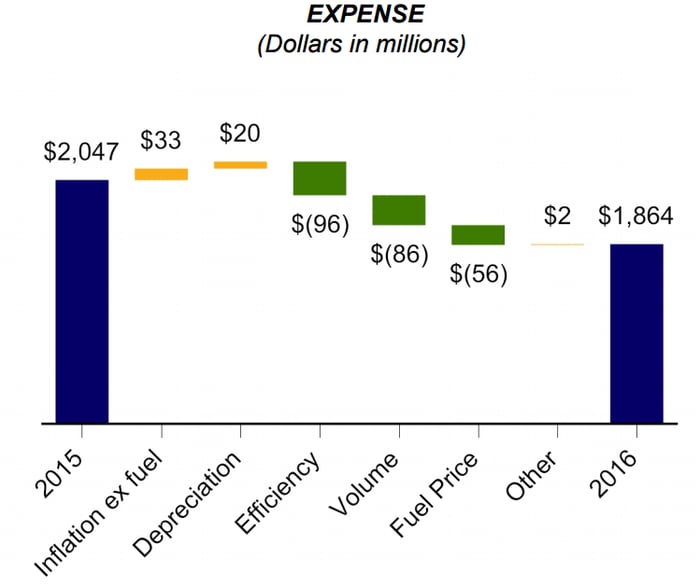 The company's efficiency savings is currently approaching $350 million, and while that might taper off throughout the back half of 2016, management is confident CSX can continue to offset inflation with its efficiency gains in 2017.

One important metric for investors following the railroad industry is operating ratio. It's used often in industries that require a lot of revenue to maintain operations, thus the lower the operating ratio, the better. Despite expenses moving lower, as shown above, the company's operating ratio increased 210 basis points, to 68.9%, and investors would of course like to see it move lower in the quarters ahead.

Looking beyond expenses and the operating ratio, though, it's important to note that management is making smart strategic moves that should help financial performance going forward. One example is management's pulling forward a payment of locomotive engines from 2017 into this year, which will cause capital investment to be $2.7 billion for the full year. The justification behind the move was to avoid finance fees associated with the purchase -- so it's a smart step in the long term. Expect core investment levels to return to between 16% and 17% of revenue next year.

While management had previously forecast that the earnings cadence would bottom in the second quarter, the outlook for the third quarter is still a little gloomy. Of the 12 markets CSX breaks out for its shipping, all but two were unfavorable heading into the third quarter.

Low commodity prices, global oil price weakness, and a continued oversupply of coal will negatively impact CSX's shipments of chemicals, agriculture products, fertilizers, and coal. The two bright spots in CSX's markets are automotive, thanks to the peaking North American automotive market in the middle of its strong spring-through-summer selling season, and minerals, which will benefit from new fly ash business and stronger construction demand.

Ultimately, railroads aren't going anywhere. CSX has proven it can make difficult decisions to cut costs and improve operations amid a challenging environment that has forced the company to switch from focusing on coal volume to intermodal. Eventually, as some of the headwinds disperse, CSX will emerge a much more efficient company that should reward shareholders over the long term.