Please ensure Javascript is enabled for purposes of website accessibility
Log In Help Join The Motley Fool
Free Article Join Over 1 Million Premium Members And Get More In-Depth Stock Guidance and Research
By Travis Hoium – Jul 15, 2016 at 8:07AM

Being the biggest doesn't always mean you're the best in solar energy. 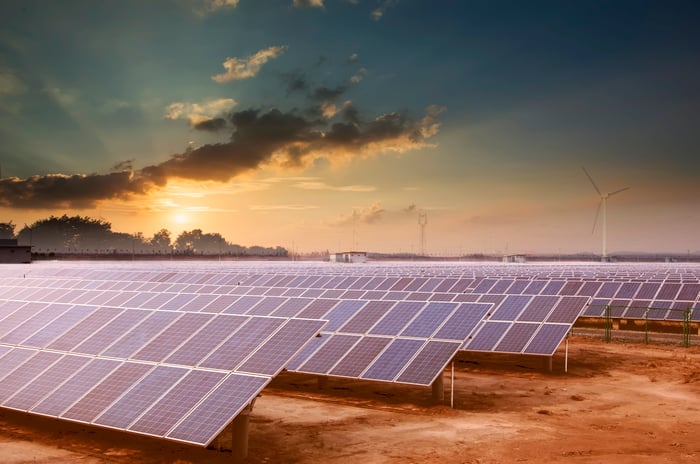 However, which one of these two solar giants should investors be buying in 2016? Let's take a look at how the companies stack up. The leader in project development

The reality in solar today is that simply selling solar panels won't keep you in business. Manufacturers have had to move into development of entire solar systems, and on that front, First Solar is a clear leader.

Canadian Solar has a total project pipeline of 13.5 GW and a late-stage pipeline of 2.1 GW. First Solar puts its pipeline at 23.3 GW, and while they're not quite apples to apples, bookings at the end of the first quarter stood at 4.0 GW, for a value of $6.4 billion.

What really separates the companies is their track records. First Solar has been one of the biggest project developers in the world for nearly a decade, and Canadian Solar is new to the business. The only reason its pipeline is 13.5 GW is because it bought Recurrent Energy last year.

Technology trends will decide the future

Canadian Solar has done an incredible job lowering the cost of solar panels. But in today's solar industry, efficiency is becoming more important than simply having the lowest cost. And on that front, First Solar is the clear winner.

First Solar has increased its panel efficiency to 16.4%, which is on par with multi-crystalline panels like the ones Canadian Solar makes. But it's improving that level of efficiency with Series 5 panels next year and is on its way to 20% efficiency in the next few year. When Series 5 is released, First Solar thinks its technology will give it a 10% energy production advantage over commodity panels.

We've seen over and over again that companies with better technology in solar are the ones who can build lasting businesses. First Solar has proven its technology advantage, and Canadian Solar is still competing in the commodity solar market.

The final piece of the puzzle is the income statement. Despite having a lot less capacity than Canadian Solar, First Solar is the clear winner on the bottom line as well. 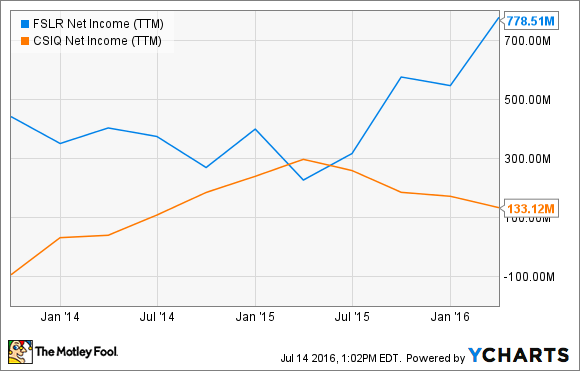 This profit is a result of better technology, more experience building projects, and a better balance sheet. First Solar is the clear winner over Canadian Solar for investors, and I think it'll be a power to watch for decades to come.

Travis Hoium owns shares of First Solar. The Motley Fool has no position in any of the stocks mentioned. We Fools may not all hold the same opinions, but we all believe that considering a diverse range of insights makes us better investors. The Motley Fool has a disclosure policy.