Vine was a pioneer in social video, but now it's a niche player. 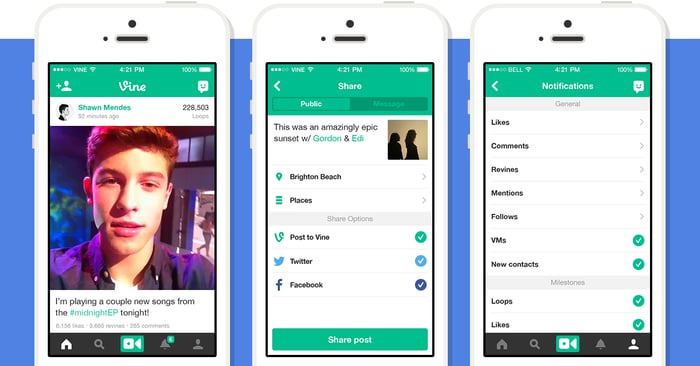 Vine has fallen out of favor with users recently, and its top executives are getting out now.

ReCode reports nearly all of the top product and business leaders at Vine have left in the last four months, most in the past few weeks. User growth has stalled and the app's reach in the United States has fallen 20% year over year, according to data from comScore.

Meanwhile, competing apps like Snapchat and Facebook's (META -0.86%) Instagram continue to grow their audiences and have successfully monetized them. Twitter (TWTR) still says Vine is an important part of its business. But while Twitter pushed a lot of product updates in its flagship app and Periscope, it let Vine fall behind.

What management says about Vine

After Jack Dorsey took over as CEO last Fall, he wrote in a letter to shareholders saying that "we've simplified our roadmap and organization around a few big bets across Twitter, Periscope, and Vine." As recently as Twitter's first-quarter earnings call, Vine was described by CFO Anthony Noto as something that can "create value for shareholders both now and into the future."

Video, the core component of Vine, remains a priority at Twitter as well. Management sees it as a "key tool" to unlock more creativity from its users. And Twitter is betting big on video advertising.

When asked about monetizing Vine, management typically had a steady response that it was focusing on building more content creation tools and improving the experience. That changed during the first-quarter earnings call when COO Adam Bain noted that the company is already monetizing both Vine and Periscope by incorporating their content into the main Twitter app.

The bottom line, however, is that Vine is a business. At least, a potential business. Dorsey even said so on the company's third-quarter earnings call last year: "We'll be looking to turn both [Vine and Periscope] into businesses."

That doesn't seem to be the case. The app's videos reportedly reach 200 million unique people every month, the same as nine months ago. Vine resorted to reporting its total reach instead of active users, echoing a similar strategy from its parent company when it started seeing a significant slowdown in monthly active users.

What's more, Vine has slowed the pace of product innovation. Vine added the ability to edit music in app last August. It only just released a new major update last month -- the ability to upload longer videos. And that was only implemented to stop Vine users from sending their audiences to another app like YouTube.

Comparatively, Snapchat and Instagram have steadily added new features to engage their audiences with their respective apps. Snapchat now competes more with Vine than other messaging apps, and Instagram's discover section is headlined by videos. Snapchat now has twice as many U.S. users as Vine, according to comScore. Instagram has over 500 million monthly active users globally.

While Vine still has a small, but dedicated audience, Twitter isn't turning it into a business. Both Instagram and Snapchat have successfully found ways to generate revenue from their users through advertising. Snapchat expects to bring in $300 million this year, and Instagram could bring in $1.5 billion.

Considering Vine was a pioneer in the social video space, it's astonishing how it never gained widespread success despite the rapid rise in video sharing on social media. Vine could have been a big part of the space, but it's now relegated to a small niche of creators and a relatively small audience due to its lack of product innovation.

It may be time for Twitter to take a bigger role in the direction of Vine, instead of the mostly hands-off approach it's taken so far. The recent shakeup in leadership at the company represents an opportunity to change direction and perhaps integrate more of Vine's features with the flagship Twitter app and Periscope. Without user growth, it's time to figure out what Vine's business is and how it can "create value for shareholders both now and into the future."