Here's a look at auto sales in Europe after the Brexit vote, as well as what sent shares of American Airlines and SAGE Therapeutics higher this week.

Stocks in the U.S. markets gave up some of the week's gains on Friday, after moving higher for four sessions that sent the major indexes to record highs. The recent jobs report and a healthy gain in U.S. retail sales in June paved the way for the markets to brush off Brexit concerns, at least for now. The S&P 500 (^GSPC -0.09%) and Dow Jones Industrial Average (^DJI -0.56%) moved 1.52% and 2.08% higher, respectively, for the week.

Let's take a look at automotive sales in Europe to better understand the impact of the U.K.'s decision to leave the European Union, as well as some other big headlines in the stock market this week.

The markets got a small glimpse of the initial impact of the Brexit decision as European car sales growth slowed in June, mostly due to deteriorating consumer confidence. Registrations in the EU and EFTA (European Free Trade Association) markets moved 6.5% higher in June, to a total of 1.51 million units, according to the ACEA (European Automobile Manufacturers Association) on Friday.

At the moment, it really depends if you're a glass-half-full, or a glass-half-empty type of person. On one hand, industry sales still increased by a fair amount and June marked the 34th consecutive month of automotive sales gains in Europe. On the other hand, June was also the slowest growth rate during the second quarter, and the 6.5% increase was below the first-half sales gain of 9.1%.

Unfortunately, this is likely merely a small glimpse into the overall impact of Brexit.

"The full impact will be seen during 2017 and 2018 when registrations reflect customers' decisions taken after the Brexit vote," Automotive News paraphrased Carlos Da Silva, manager of IHS Automotive European light-vehicle sales forecasts, as saying. "However, without any precise road map of how and when the UK will leave the EU, it is very hard to be specific about possible influencing factors," he was quoted as saying.

A bright spot was found within Ford Motor Company's (F 1.29%) European sales data. Even in the overall industry's slowdown, Ford's sales gains were even slower, but a good sign for investors was that sales of Ford's higher-specification models continued to increase.

Sales of its premium Titanium models moved 400 basis points higher, from 36% of total sales to 40%, compared to last year's June. Also, in addition to Titanium trim sales, when adding Vignale, ST, and Red/Black Editions, they combined to generate 60% of Ford's passenger car sales, a 300-basis-point improvement from last year.

Outside of the automotive industry, one of the biggest movers within the S&P 500 this week was American Airlines (AAL -3.12%). Shares of the airline moved 10% higher during intra-day trading on Tuesday after the company announced its pre-tax income would be boosted thanks to a new credit card deal with both Citigroup and Barclays.

American Airlines told investors its pre-tax income would jump by $200 million this year; it's also expected to jump $550 million next year and by $800 million in 2018. For investors, there's nothing like a solid $1.55 billion in incremental pre-tax earnings to start off a Tuesday trading session. For context, American Airlines generated a pre-tax profit of $1.2 billion, excluding special items, during the first-quarter -- it's a substantial addition to the bottom line.

It's actually a more intriguing move than meets the eye, too. That's because typically these deals are done with a single credit card entity, and this dual-issuer arrangement is the first of its kind in the U.S. airline industry.

Last but not least on this list is SAGE Therapeutics (SAGE -0.24%), which delivered great news to its investors earlier this week, sending its stock up around 37% during intra-day trading on Tuesday, before ending the week up about 24%. 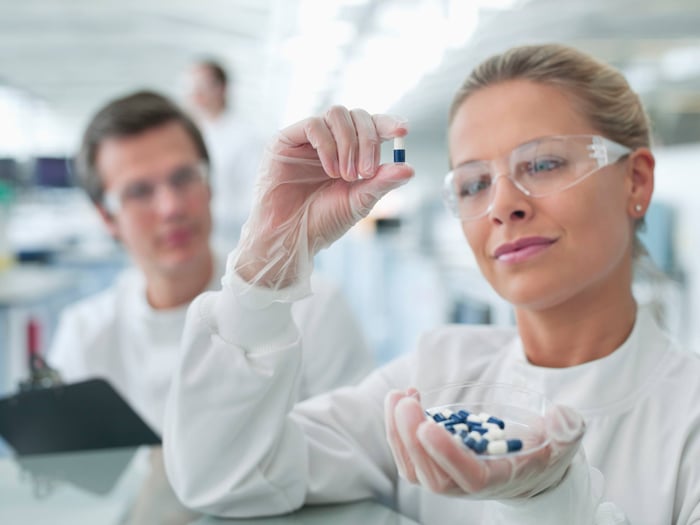 SAGE Therapeutics announced positive news with its phase 2 clinical trial of SAGE-547, a potential treatment for severe postpartum depression (PPD). More specifically, data from the study showed that 70% of the patients that used SAGE-547 were in remission from their depression at the 60-hour mark, or the primary endpoint of the trial – the placebo group observed a 10% remission. Even better, though, was that the rate of remission was similar during a 30-day follow-up visit.

It was significant enough for Dr. Samantha Meltzer-Brody, the primary investigator for the trial, to say: "This is potentially one of the most important clinical findings in the pharmacologic treatment of postpartum depression to date."