Sometimes no news is good news.

What: Shareholders of Ionis Pharmaceuticals (IONS -1.32%), a mostly clinical-stage biotech, are having a pleasant end to the trading week. The company's shares are up 11% as of 3:45 p.m. EDT, though it's not exactly clear why.

So what: There isn't any news out of the company today that could help justify today's price surge: No press releases. No clinical updates. No presentations. Nothing.

There weren't even any noteworthy ratings changes out of Wall Street firms today that could help to explain the move.

Given the lack of news, it's likely that shares of Ionis are simply recovering a bit from the beating that they have taken year to date. The move has been so severe that even after accounting for today's gain, shares are still down more than 56% since the start of the year. 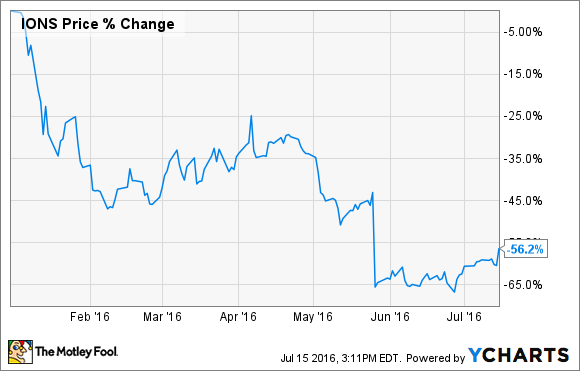 The huge sell-off can be traced to primarily to GlaxoSmithKline's (GSK -1.72%) decision to hold off initiating a planned phase 3 study of IONIS-TTRRx, a drug being researched as a treatment for TTR (transthyretin) amyloid cardiomyopathy. Glaxo -- nervous about some safety concerns that caused the FDA to put the drug on a clinical hold -- is waiting for another round of data before deciding whether it wants to move forward, but that data won't be available until 2017.

Now what: There's no doubt that it's been a rough couple of months to be an Ionis Pharmaceuticals shareholder. Still, there's far more to this company's long-term growth story than just IONIS-TTRRx. Bulls should do their best to remember that the company has a strong pipeline of products and a Who's Who list of partners. Over the last decades Ionis has pulled in more than $1.4 billion in upfront and licensing fees from its partners, and it could earn another $8.5 billion in future milestone payments -- plus royalties on sales -- if everything goes according to plan. That's a lot of potential for a company with a $3.3 billion market cap.

The company is also flush with cash right now, holding more than $700 million on its books as of March. That gives it plenty of financial firepower to advance its compounds down the regulatory pathway.

All in all, there's a lot to like about Ionis Pharmaceuticals' chances in the long term. Investors who agree might want to scoop up a few shares while Wall Street is pushing this company's stock into bargain territory.

The Motley Fool owns shares of and recommends Ionis Pharmaceuticals. We Fools may not all hold the same opinions, but we all believe that considering a diverse range of insights makes us better investors. The Motley Fool has a disclosure policy.