Some dividends are highly valuable, some aren't sustainable, and some are next to worthless -- but here are three that could be slashed. 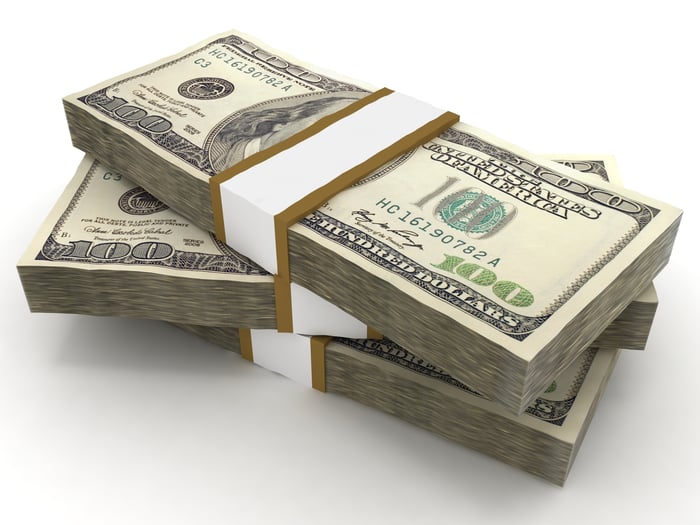 There are many perks for investors who own dividend stocks, which remain one of the greatest ways to build wealth over the long term. Typically, these are healthy, less volatile, and well-established companies generating plenty of cash to write investors a quarterly check. However, companies occasionally find themselves with a ballooning payout ratio ( in addition to a myriad of other factors) that could make it difficult to maintain the dividend in its current form. Don't always fall in love with that high dividend yield before doing more research. In fact, here are three dividend stocks you should think twice about buying.

This energy giant's income stream might spring a leak

Matt DiLallo: Pipeline and processing giant Energy Transfer Partners (ETP) currently pays its investors a lot of money each quarter, evidenced by its 10.9% yield. However, it is not on solid ground right now.

At the forefront of the company's issues is its sagging distributable cash flow, which last quarter fell $51 million to $793 million. That number is a concern because the company paid its investors $917 million in distributions, which resulted in a worrisome distribution coverage ratio of 0.86 times. Needless to say, this is not sustainable.

Energy Transfer Partners' problems stem from the impact of weak commodity prices. For example, the earnings of its midstream segment fell from $310 million in the first quarter of 2015 to $263 million last quarter because of a decrease in non-fee-based margins resulting from weak oil and gas prices. Meanwhile, volumes in its intrastate transportation and storage segment declined due to lower natural gas production volumes, which were again the result of low prices. This is eating into its distributable cash flow and putting the distribution at risk.

On the bright side, commodity prices have improved over the past couple of months. However, if they reverse course again, it could prove problematic for Energy Transfer Partners. The company just doesn't have a lot of wiggle room to continue to pay out more than it earns, given the current environment and the fact that several of its peers have already slashed their payouts.

This fertilizer dividend isn't as safe as you think

Neha Chamaria: Potash Corporation of Saskatchewan Inc. (POT) may be a great choice for value investing, but if you happened to pick the stock solely for its dividend yield of 6%, you might want to think twice. Though attractive, the dividend looks unsustainable for several reasons.

To begin with, PotashCorp is struggling with falling revenues and profits: It lost almost 40% on its bottom line in the past three years as nutrient prices slumped. But the first quarter proved how bad things really are when PotashCorp's profits tumbled a staggering 80% year over year, compelling the company to slash its full-year guidance dramatically. Not surprisingly, weak operational performance has driven PotashCorp stock down almost 45% in one year, as of this writing, and sent its yield soaring. That's risky because a high dividend yield is good only as long as it's backed by growth in earnings.

Worse yet, PotashCorp paid out 100% of its profits and 120% of its free cash flows in dividends last year, leaving no room for increases whatsoever. In fact, if profits and cash flows continue to fall -- which will likely be the case at least this year -- PotashCorp will either have to slash its dividends or pay out from borrowed money. It already cut its quarterly dividend by 34% in early 2016 to maintain a 100% payout ratio. Unfortunately, that may not suffice, given the weaker demand and prices of nutrients, which could drive PotashCorp's profits lower than expected and force it to cut dividends further.

Daniel Miller: For investors strictly looking for stocks paying high yields, a company such as Las Vegas Sands (LVS 1.96%), with a yield floating around 6%, might struggle to grow its dividend in the near term. At worst, the dividend could be slashed if gambling in Macau doesn't turn around as quickly as investors hope.

Part of the reason Las Vegas Sands' dividend could stagnate in the near term stems from the company's reliance on Macau. LVS poured capital into Macau, and by the end of last year, it operated nearly half of all hotel rooms, roughly one-third of all slot machines, and a quarter of all casino tables in the territory. Macau generated 56% of LVS' EBITDA during the first quarter, compared to just 14% from the United States.

That's be great news when times are good, but Macau has posted declines in gaming revenues in recent years. Just last month, Macau posted an 8% decline compared to the prior year, which was actually better than expected. Beyond Macau, LVS also has some legal risks, as it agreed to pay $75 million to the former president of Sands China and has a couple of additional lawsuits with former developers pending.

Last year Las Vegas Sands generated enough EBITDA, at about $4.1 billion, to cover the expense of its current dividend payout, which will total roughly $2.3 billion. But when you consider that a vast majority of cash is generated outside the U.S. (meaning LVS could need to repatriate some of that) and that the company faces pending lawsuits and slowing growth in Macau, it seems like investors could find safer dividend stocks elsewhere.

PotashCorp Cutting More Than 1,000 Jobs in U.S. and Canada

5 Stocks That Doubled Their Dividends in the Past Year