Dow Chemical's megamerger could bring a good year for investors if synergies live up to expectations.

Materials stocks have been under a variety of pressures over the past few years that have hurt stocks. Competition from Asia is heating up, demand for many products has dropped as global construction has slowed, and a strong dollar is hurting earnings for U.S. companies. But in the weakness there are some stocks set up for a strong year. Here are my top three picks for 2016.

But since then, Potash has gone from growth to shrinking and its once-lofty valuation has dropped from over 30 times trailing earnings to under 10 and a dividend yield over 8%. Potash has gone from an expensive stock going into 2011 to a forgotten value stock in 2016. And I see some upside operationally as well. 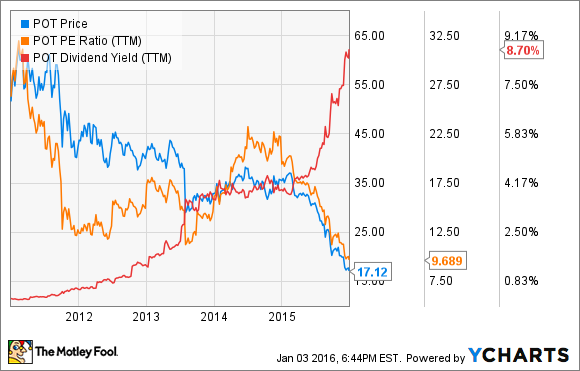 Sales volumes in 2015 are expected to fall to 9.0 million to 9.2 million  tonnes, down from 9.3 million tonnes a year ago, but potash and phosphate sales are both up this year, so it's not all bad news. Management also thinks long-term demand will be strong as demand for food rises. Given the valuation of the stock, the high dividend yield, and the long-term need for Potash's products, I think the worst is behind this stock and 2016 will be a great year for Potash.

Hawkins
The specialty materials space has had a rough couple of years but Hawkins (HWKN 2.72%) has managed to remain profitable through the turmoil and in 2015 made a transformative acquisition. In December, it closed on a $157 million acquisition of Stauber Performance Ingredients, who had add about $117 million in revenue in the 12 months ending Sept. 30.

The acquisition adds to Hawkins' existing line of industrial products and adds food and dietary supplement products that should be accretive immediately. This gives a little more diversity to the business, which should be welcome news for investors.

Hawkins' stock isn't cheap at 19.6 times trailing earnings but the Stauber acquisition should increase revenue and gross margin by more than a quarter in 2016, which should give the stock a boost.

Dow Chemical Co.
There hasn't been a lot of movement in the market since Dow Chemical Co. (DOW) and DuPont announced their merger in December. It was sort of a boring announcement from companies the market doesn't see a lot of growth from. But that's why I think this is a great stock to own longterm.

The plan for Dow and DuPont is eventually to split the business into materials, specialty chemicals, and agrochemicals businesses. In theory, three hyper-focused businesses will be better off than two diverse and unfocused businesses. This should also lead to greater profitability for Dow investors in the long run.

It could take some time to see the full benefit of the merger, but I think in 2016 we'll see some fruit. Cost reductions at Dow and DuPont have already begun and when fully complete cost synergies are expected to be $3 billion per year with another $1 billion in "growth synergies."  That should make Dow a top materials stock in 2016.

3 Beloved Companies That Could Slash Their Dividends

PotashCorp Cutting More Than 1,000 Jobs in U.S. and Canada

5 Stocks That Doubled Their Dividends in the Past Year