There's a real risk of a dividend cut at these two midstream players.

It's not news that oil and gas companies are feeling the pinch of weak energy prices. There's been a lot of very public upheaval in the industry and, just as notably, those related to it. That's why danger lurks for these two high-yield dividend stocks that help move oil and gas from where it's drilled to where it's used. If you're tempted by the big yields at Williams Companies Inc (WMB -0.97%) or CorEnergy Infrastructure Trust, Inc. (CORR -6.96%), you might want to think again.

Williams Companies' biggest problem right now is the ongoing battle surrounding its plan to be acquired by Energy Transfer Equity, L.P. (ET -2.39%). This was a deal that quickly went sour along with falling energy prices, has already found its way into the U.S. courts, and has much larger implications for Williams and its ability to pay a dividend than for Energy Transfer.

For starters, Williams nixed a deal with affiliated Williams Partners (NYSE: WPZ) to ink the deal with Energy Transfer. Getting out of that deal cost Williams Energy a $400 million termination fee, and now that it looks like the Energy Transfer deal is off, Williams could be on the hook for another termination fee -- to the tune of nearly $1.5 billion. No wonder Williams Companies warned investors that it would cut its dividend if the deal doesn't go through.

Adding more fuel to the fire on the dividend cut risk is that fact that Williams' dividend coverage ratio in the first quarter was only about 0.9 times or so. Basically, it's already paying out more than it can afford. Although it's pretty clear that the legal wrangling with Energy Transfer isn't over, with the deal seemingly dead, it wouldn't be wise to buy Williams on the hopes of a continuation of the current dividend and 11% plus yield.

CorEnergy is something of an odd beast; It's a real estate investment trust (REIT) that owns midstream assets. That's not the common business model in the REIT space or the midstream arena, and it makes the company's around 10% yield very questionable right now as oil and gas drillers confront the reality of low prices. 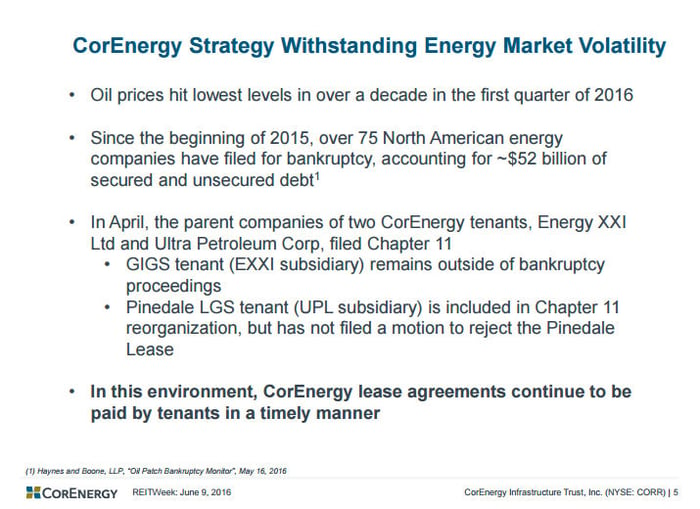 On one hand, CorEnergy owns "property" that is vital to its oil and gas drilling customers. Without the pipelines CorEnergy owns, they can't get their product to market. That puts a special onus on keeping current with rent. On the other hand, two of CorEnergy's largest lessees, representing nearly 60% of 2015 revenues, have fallen into bankruptcy. That basically means they could, potentially, stop paying rent.

CorEnergy hasn't done anything wrong here. It still owns vital assets. And since it collects rent, it has some protection in the face of its customers' bankruptcies that lenders do not. But the unique nature of the REIT's business means it and its investors are in uncharted territory right now. So far, CorEnergy continues to get paid, and management believes that won't change. For all but the most aggressive investors, though, this high-yield stock probably isn't worth the risk.

Cuts on the way?

Williams has already suggested a cut is likely, so we should take the high yield there with a big grain of salt. There hasn't been a cut yet, and the dividend may survive for a little longer as the legal fight over the broken merger continues, but it doesn't look good right now for dividend investors. CorEnergy, meanwhile, has suggested that its dividend will survive the bankruptcies of two key tenants. That may be true, but there's no precedent to back up that belief. Even though the 10% or so yield is tempting, it's only appropriate for aggressive investors looking for a special situation play.