In late 2012, microprocessor giant Intel (NASDAQ:INTC) released its first product under the Xeon Phi branding. The first commercially available Xeon Phi products were co-processors designed to accelerate what the company refers to as "highly parallel workloads."

Though Knights Corner was hardly perfect, it enabled the chip giant to gain significant traction in the market for accelerated computing. Indeed, Intel data center chief Diane Bryant recently told PC World that the company has 33% share of, as PC World describes it, "the market for [high performance computing] workloads that use a floating point accelerator."

The second generation Xeon Phi product, formerly codenamed Knights Landing, actually comes in two forms. The first variant is one that is a stand-alone processor; it doesn't require a separate host processor in order to function. The other variant, which will presumably be announced at a later date, will come in the form of a co-processor, just as Knights Corner did.

It would seem that the stand-alone processor version of Knights Landing is gaining some significant traction, at least in the supercomputer market. Let's take a closer look.

Interesting comments from a supercomputer specialist

A well-known vendor of supercomputers is a company called Cray (NASDAQ:CRAY). On the company's most recent earnings call, management highlighted the three processors that would power its "major supercomputing product releases" in 2016.

According to Cray CEO Peter Ungaro, the company has a "substantial amount of business" that relies on both Intel's Knights Landing Xeon Phi part as well as NVIDIA's Tesla P100.

Knights Landing may prove to be a hit in supercomputers

When Intel formally launched the Knights Landing-based Xeon Phi processors, the company said in a presentation that these new chips would see "widespread market adoptions." In particular, Intel says that it expects to sell over 100,000 Knights Landing units this year into the high performance computing market and even provided long lists of system builder partners and research laboratories that will adopt the products. 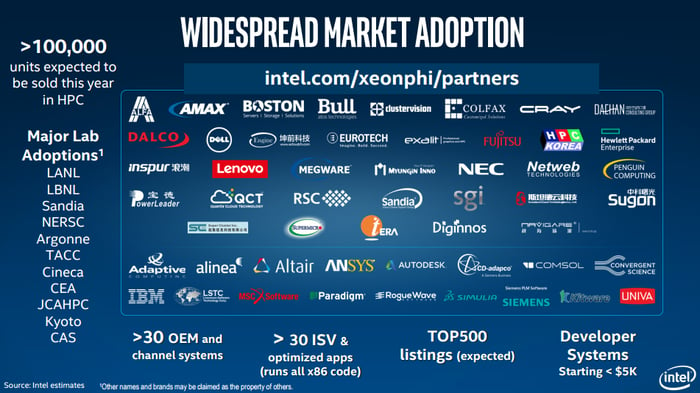 What does this mean for NVIDIA?

The bad news for NVIDIA is that going forward, it will be locked in a heated and fierce battle with Intel in this market for the foreseeable future.

The good news, though, is that the market seems to be large enough for the two of them. Even as Intel appears to be gaining traction in this market, NVIDIA reported that its datacenter related sales were up 63% year-over-year last quarter. Management also expects growth in this segment in the current quarter as well.

Even if Intel is able to capture additional share relative to NVIDIA, it would seem that the market opportunity is currently large enough for the two of them to grow their respective revenue from this market.