Melco Crown may be in for a long decline in revenue and earnings.

Melco Crown (MLCO 2.58%) was once one of the hottest stocks in the gaming industry. It was previously the only U.S. traded company that was a pure play on the Macau gaming market, which has grown to be the largest in the world.

But Macau's gaming revenue is down 44% in the first half of 2016 compared to two years ago, and competitors like Las Vegas Sands (LVS 0.11%), Wynn Resorts (WYNN 0.45%) and MGM Resorts (MGM 1.11%) have been spending billions building properties that will compete and further draw customers away from Melco Crown. Does that mean the company has already peaked?

Melco Crown was an early mover

When the Cotai Strip was being developed, there were only a few companies with the guts to build there. Las Vegas Sands has bet big on the region with three resorts, but Melco Crown augmented its presence with City of Dreams in 2009. The resort now features 500 table games, 1,250 slot machines, and 1,400 hotel rooms. The resort has been a huge success with $2.8 billion in revenue last year alone, by far the largest of the company's properties. However, Studio City is the region's latest addition, which opened last year and added another 1,600 hotel rooms, 250 table games, and a number of entertainment options.

This early mover advantage served the company well as it built a profitable business quickly with strong cash flows, represented below by EBITDA. However, you can see that the decline in Macau's gaming market over the past two years has put a lot of pressure on the bottom line. 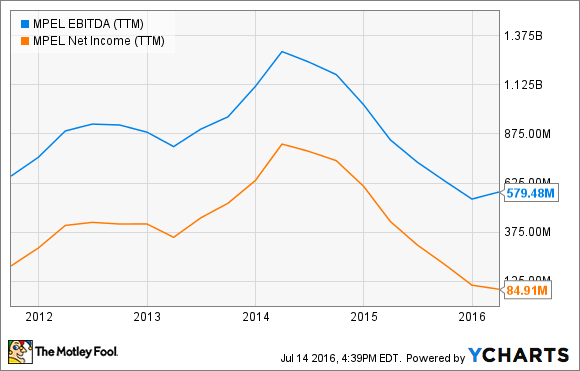 To make matters worse, Melco Crown doesn't have any major growth catalysts on the horizon, and new resorts could steal business this year and beyond, putting even more pressure on the business.

Wynn Palace will be the next resort to open in Macau later this summer, across the street from City of Dreams. The $4.1 billion property will have 1,700 rooms, as many as 500 table games, and the usual high-end shops and restaurants Wynn is known for in this industry. It could immediately attract high rollers looking for a new venue, and Wynn Resorts properties typically outperform neighbors when they open, so it'll likely be a drag on Melco Crown.

Las Vegas Sands will open The Parisian later this year or in early 2017, adding another 3,000 hotel rooms, as many as 500 table games, and Paris-themed entertainment to the Cotai Strip. MGM Resorts will also open their Cotai property in 2017 with another 1,500 hotel rooms, meeting space, retail, restaurants, and potentially another 500 table games. That's three new resorts in close proximity to City of Dreams and Studio City with over 6,000 hotel rooms and a slew of entertainment options, all drawing customers away from Melco Crown's properties. That's not good in a shrinking Macau market.

This may be as good as it gets

Without any real growth prospects, this may be as good as it gets for Melco Crown. The company will likely lose market share in the second half of the year and in 2017, and with overall Macau revenue in decline, that doesn't bode well for earnings.

If the gaming market continues to struggle and new properties cannibalize the company's current revenue, we could even see Melco Crown start to report losses soon. In the face of this uncertainty, it may be time for investors to start looking for gaming opportunities elsewhere.

Why Melco Resorts Stock Was a Lousy Bet Today
370%