Macy's has introduced new "Last Act" clearance sections in all of its stores and is also adding off-price sections to some locations -- but naysayers are misrepresenting Macy's strategy.

Macy's (M -3.96%) has struggled mightily since the beginning of 2015, as it was squeezed by a combination of slumping apparel demand in the U.S. and declining spending by foreign tourists in its flagship stores. This culminated in an ugly 7.4% sales decline last quarter.

Macy's sales have been sliding since early 2015. Image source: The Motley Fool.

Its recent woes have sparked a wave of speculation about what it's doing wrong and whether it can recover. A recent story by Business Insider concluded that Macy's may be headed the way of Sears Holdings (SHLDQ) -- i.e., a death spiral.

However, unlike Sears Holdings, which has been losing huge sums of money for many years, Macy's is still solidly profitable. Furthermore, many of Macy's critics seem to misunderstand recent changes to the company's discounting strategy, contributing to these exaggerated worries about Macy's future prospects.

In the past year or so, Macy's has rolled out "Last Act" clearance sections in all of its stores. These sections have a simplified pricing structure: Items are heavily marked down but aren't eligible for coupons or any additional discounts.

The Business Insider story described this as a way for Macy's "to get into [the] discounting game" quickly. One analyst quoted by Business Insider said that the Last Act sections are a bad idea because they damage the company's image and there are already lots of other off-price and discount stores.

This doesn't accurately portray the strategy behind Macy's Last Act sections, though. Clearly, Macy's is suffering from an overabundance of inventory. (Macy's entered 2016 with inventory up 2% year over year following a 5% sales decline in Q4 2015, whereas retailers try to keep inventory changes in line with sales growth.) As a result, its Last Act clearance sections have looked particularly messy.

However, department stores always have clearance inventory. One goal of the Last Act sections is to clean up the rest of the store by putting clearance items in a designated area rather than having clearance racks cluttering up every section.

In short, clearance is a necessarily evil of the department store business model. Macy's isn't trying to expand its clearance business through the new Last Act sections -- it's trying to find a way to make the clearance items less harmful to the rest of the store.

Moving into the off-price business appears to be a major strategic priority for Macy's. Among its peers, Nordstrom (JWN -0.74%) has been particularly successful in the off-price market, via its Nordstrom Rack stores.

Nordstrom has frequently opened Rack locations near its full-line stores, but Macy's has taken things one step further. It has started to open "Macy's Backstage" off-price sections inside some of its regular department stores.

Skeptics argue that Macy's is cannibalizing its full-price sales by selling the same merchandise at a discount in these in-store off-price Macy's Backstage sections. Once again, this reflects a deep misunderstanding of the company's strategy.

Macy's CFO Karen Hoguet revealed on the company's most recent earnings call that none of the products in the Macy's Backstage sections are closeouts from other parts of the store. They are all separately sourced. (For comparison, Nordstrom Rack typically gets about 20% of its merchandise from full-line Nordstrom stores.)

Nordstrom has had tremendous success in the off-price market. Image source: The Motley Fool.

In fact, Macy's Backstage carries a lot of product categories that Macy's has never sold before, such as toys and games, home decor, and some electronics items. This could potentially help Macy's expand its addressable market without jeopardizing its brand.

Selling similar merchandise in an off-price section right next to full-priced goods would obviously be a bad idea. This is the caricature of the Macy's Backstage strategy that critics have presented, but it's not what Macy's is actually doing. Putting Backstage sections in Macy's stores may or may not work, but the underlying strategy at least makes sense.

Way too early to give up on Macy's

While Macy's faces some big challenges, it's also important for investors to remember that the company is just a year and a half removed from its last quarter of sales growth. That puts it in a completely different category than Sears, where sales have been on the decline for more than a decade. 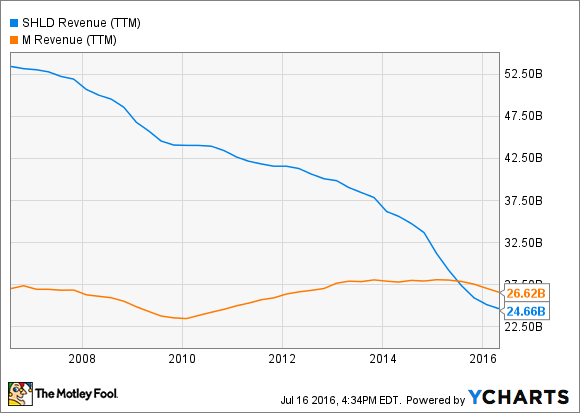 It took a few quarters for Macy's management to recognize the extent of the sales slowdown. However, the company is now actively working on a number of fronts to turn things around.

Those efforts include changes to Macy's clearance strategy and a move into the off-price market. But Macy's (like Nordstrom) is being very thoughtful about how to avoid tarnishing its brand through too much discounting. Pundits who envision it becoming a giant chain of outlet stores are barking up the wrong tree.

Adam Levine-Weinberg owns shares of Macy's and Nordstrom. The Motley Fool recommends Nordstrom. We Fools may not all hold the same opinions, but we all believe that considering a diverse range of insights makes us better investors. The Motley Fool has a disclosure policy.