Welcome to biotech investing, dear Fools. It can be hard to value a pipeline that's a few years away from producing revenue.

So what: Of course, the one-day increase is all relative. Even with today's double-digit jump, ImmunoGen's stock trades below where it was in June after announcing plans to raise $100 million by selling convertible senior notes due in 2021. It has a long way to get back to where it was trading before raising additional capital. 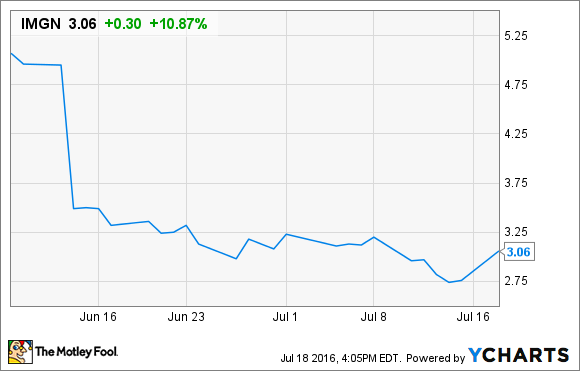 Now what: Despite today's excitement, it's back to waiting for ImmunoGen's investors. The biotech's next huge value inflection will come with the release of data from the FORWARD I trial, testing mirvetuximab soravtansine in patients with ovarian cancer. However, the company hasn't even announced that the clinical trial has started yet -- the last update was that management was meeting with the FDA this summer to get its input on the trial -- so it's going to be a while before investors know the outcome of FORWARD 1, which the company believes will be enough for full approval.

ImmunoGen does have a couple of nearer-term events that could increase the value, including data from FORWARD II, which is already enrolling patients in a trail testing mirvetuximab soravtansine in combination with other cancer drugs. The trial won't be enough for an approval, but if the drug works in combination with other drugs, it could increase the potential market, raising ImmunoGen's valuation.

Brian Orelli has no position in any stocks mentioned. The Motley Fool recommends ImmunoGen. We Fools may not all hold the same opinions, but we all believe that considering a diverse range of insights makes us better investors. The Motley Fool has a disclosure policy.