Despite strong headline numbers, the toymaker's stock fell 6.6% on Monday due to concern that a combination of factors could foreshadow a challenging holiday period. 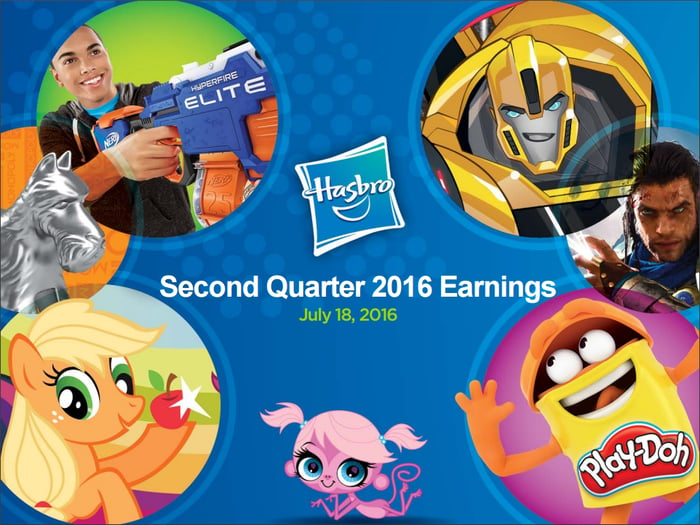 Shares of Hasbro sank 6.6% on Monday, as the market brushed off the strong headline numbers and focused on the slowdown in sales of boys toys and a large inventory buildup. The worry is that this combination could foreshadow challenges for the critical holiday period. While this is a legitimate concern, quarterly numbers of most types will bounce around. This is especially true for a company such as Hasbro, whose year-over-year comparisons will be lumpy because its toy sales are heavily driven by the success of movies.

Negative currency impact continues: Revenue increased 12%, excluding a negative $17.7 million impact from foreign exchange due to the relative strength of the U.S. dollar. Positively, currency headwinds are subsiding from 2015 levels. Hasbro generated 45.6% of its total revenue in international markets.

Analysts' estimates beaten: Long-term investors shouldn't give too much weight to analysts' estimates since Wall Street is focused on the short term. However, it's worth noting that Hasbro handily beat both revenue and EPS expectations of $858.68 million and $0.38, respectively.

Sales of boys toys rose just 4% from the year-ago period, which was surely one of the factors responsible for the market's reaction. 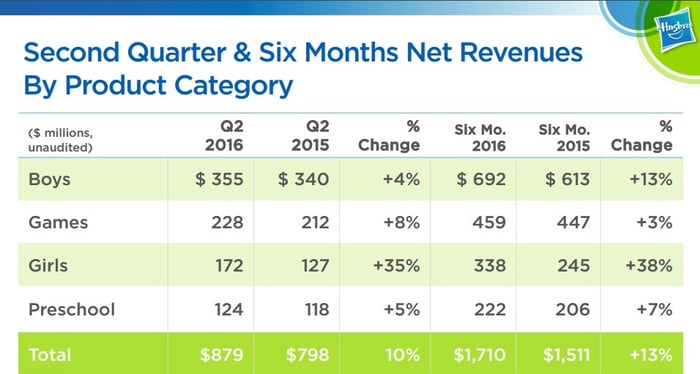 Many investors likely expected a stronger result in boys toys because they were counting on toys based on the phenomenally successful Star Wars: The Force Awakens, which debuted domestically on Dec. 18, to still be a notable revenue force. There's no indication this wasn't the case, though Hasbro doesn't quantify such things. CEO Brian Goldner said during the conference call with analysts that the boys category had a tough comparison because sales of toys based on the Transformers: Age of Extinction movie, released during the summer of 2014, were still going strong in the second quarter of 2015.

The girls category outperformance was due to sales of dolls based on Disney Princess characters and the Frozen film. These new revenue sources kicked in on Jan. 1, when the global rights to produce and market these dolls transferred from Mattel to Hasbro.

Hasbro performed nicely across its three segments, with revenue in U.S. and Canada rising 11%, international up 11% -- or 15% in constant currency -- and entertainment and licensing up 9%.

Inventory jumped to $572 million from $404 million in the year-ago period -- a spike of 42%, or 48% adjusting for the negative foreign exchange impact. These numbers are not as concerning as they appear. As Hasbro CFO Deb Thomas said on the conference call:

Approximately 80% of the year-over-year increase is in brands which are new to our portfolio or delivering high growth including Disney Princess and Disney's Frozen, Star Wars, Nerf, Play-Doh and Yokai Watch. The quality of our inventory is high both at Hasbro and at retail as we're supporting new initiatives in addition to our planned growth.

The facts seem to support Hasbro's assertion that the bulk of the inventory buildup is for good reasons. That said, investors will want to see inventory levels come down as we move closer to the key holiday season.

Hasbro turned in a solid second quarter, following a standout first quarter, so its 2016 results are strong. Investors will want to closely monitor the boys segment results and inventory levels in the third and fourth quarters.

As with other toy companies, Hasbro's success in 2016 will heavily hinge on how well its toys and games sell in the critical fourth -- or holiday -- quarter. Unfortunately, investors won't get a feel in the third quarter for likely holiday demand of toys based on the Star Wars' stand-alone film Rogue One, slated to open domestically on Dec. 16. Hasbro plans to begin rolling these toys out to retailers in late September, the tail end of the third quarter. By comparison, the company began rolling out its Star Wars: The Force Awaken toys in early September last year.