Netflix (NASDAQ:NFLX) shares crashed on Tuesday, following Monday night's second quarter report that disappointed many investors. The stock fell as much as 14.5% in the morning session.

In the second quarter, Netflix sales increased 28% year-over-year to land at $2.1 billion. Earnings rose 55% to $0.09 per diluted share. Revenue was in line with management guidance, while contribution profits and bottom line earnings came in ahead of projections. Netflix would have settled for earnings near $0.02 per share -- Wall Street's consensus targets were, as usual, toeing the line of management guidance.

However, the quarter's stated subscriber growth targets turned out to be unreachable.

Netflix had expected to land 500,000 net new subscribers in the U.S., along with two million new international accounts. Instead, the domestic growth figure stopped at 160,000, and the overseas number was 1.5 million. As a result, the stock has suffered a 14% haircut.

Netflix isn't measured by the same yardstick as most public companies. Subscriber growth is the most important number on the table, and investors often ignore what's going on in the traditional top and bottom lines. That's exactly what happened here.

The market response is not entirely unfair but probably overdone. Delivering 1.7 million new subscribers when you were hoping for 2.5 million sounds terrible, but let's put these figures in a different perspective. 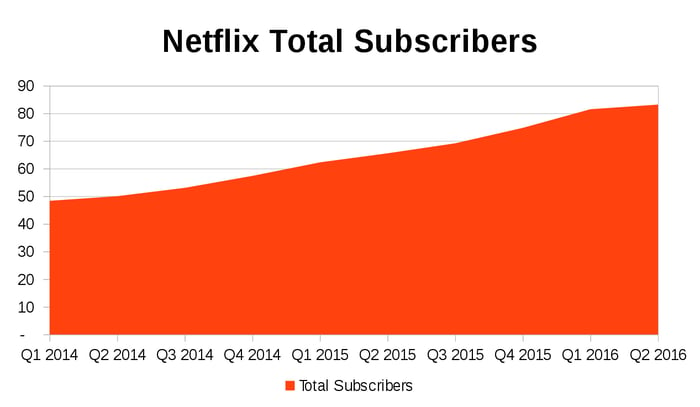 Customer counts in millions of global subscribers. Image source: Author, based on data from Netflix

Netflix grew its total subscriber count by 27% year-over-year, for a grand total of 83.2 million. That's roughly one percentage point short of the official target, which would have brought the total to 84 million subscribers and produced 28% annual growth.

The result is still a miss but not a wholesale disaster. In the grand scheme of things, the slowdown is noticeable but hardly unique in Netflix's history, and the streaming giant should get back on track in the fourth quarter -- after it gives the Olympics some space to distract consumers worldwide from other entertainment options for a while.

Considering that these numbers were achieved while implementing price increases in some territories, any growth at all could be seen as a vote of confidence.

This is not Qwikster 2.0. It's a minor speed bump on an otherwise promising runway. If share prices hang around at these historically low levels for much longer, you should probably think about picking up a few shares on the cheap.