Signs of a turnaround are starting to surface, but the company still has a lot to prove.

Another quarter, another revenue decline for International Business Machines (IBM 0.21%). IBM reported its second quarter results on July 18, beating analyst estimates across the board while posting a year-over-year sales decline for the 17th straight quarter. Profits tumbled as well, although the company maintained its previous earnings guidance for the full year. Here's what investors need to know.

IBM generated $20.2 billion of revenue during the second quarter, down 2.8% year-over-year but $210 million higher than the average analyst estimate. Currency had a minimal effect on IBM's revenue, a nice change from 2015 when swings in exchange rates reduced reported revenue by billions of dollars.

IBM's strategic imperatives generated $8.3 billion of revenue, up 12% year-over-year. This collection of businesses, which includes cloud, analytics, social, mobile, and security, produced $30.7 billion of revenue over the past 12 months, about 38% of the company's total. Cloud revenue totaled $11.6 billion over the past 12 months, with cloud-as-a-service revenue hitting a $6.7 billion annual run rate at the end of the second quarter, up 50% year-over-year.

While software is no longer its own segment, IBM still provides information on software sales. Total software revenue grew by 1% adjusted for currency during the second quarter, marking the first quarter of growth since early 2014. This was driven by a 7% increase in annuity revenue. With IBM shifting toward cloud computing and subscription software, it appears that the transition is finally driving software sales growth. 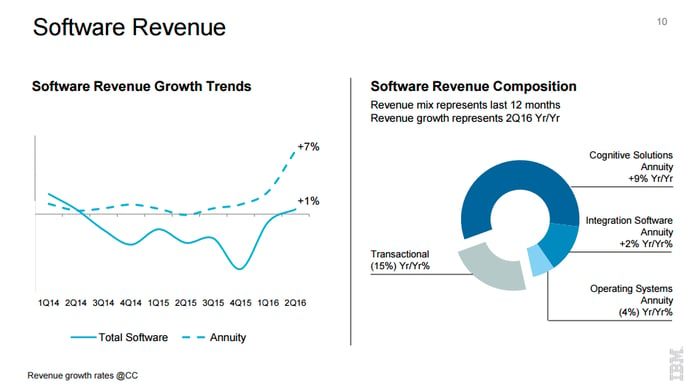 IBM reported a steep drop in profits during the second quarter. Non-GAAP earnings per share came in at $2.95, down 23% year-over-year but $0.06 better than analysts were expecting. Lower revenue and higher R&D costs are partly to blame, as is a slightly higher tax rate compared to the same period last year.

For the full year, IBM expects to produce at least $13.50 in non-GAAP earnings, which would represent a decline of about 9.5% compared to 2015. With non-GAAP earnings dropping by 19% in the first quarter and 23% in the second quarter, IBM will need to make up some ground during the second half of 2016.

Part of IBM's earnings decline during the first half of the year is due to earnings being shifted to the second half of the year. While a 23% decline in earnings sounds terrible, it's not quite as bad as it seems, assuming that IBM hits its full-year guidance.

IBM is still very much in the middle of its multi-year transformation, but there were some significant signs of progress during the second quarter. Strategic imperatives and cloud computing revenue continue to grow rapidly, and newer businesses in the cognitive computing segment are growing fast enough to offset weakness elsewhere. A return to software sales growth is also encouraging.

More than 60% of IBM's annual earnings will need to come during the second half of the year. Investors are now less pessimistic than they were six months ago, driving the stock up about 16% year-to-date. If IBM fails to deliver on its guidance during the second half, those gains could evaporate. On the other hand, hitting or surpassing its guidance for the year would suggest that IBM's turnaround is finally gaining traction.

Timothy Green owns shares of IBM. The Motley Fool has no position in any of the stocks mentioned. We Fools may not all hold the same opinions, but we all believe that considering a diverse range of insights makes us better investors. The Motley Fool has a disclosure policy.