The software company beat analyst estimates and raised its guidance for the full year.

What: Shares of virtualization solution provider VMware (VMW -0.07%) surged on Tuesday following the company's second-quarter report. VMware beat analyst estimates on all fronts and raised its guidance for the full year. After rising as much as 10.7% during the day, VMware stock was up 9.3% at 2:50 p.m. EDT.

So what: VMware reported quarterly revenue of $1.69 billion, up 6% year over year excluding the effect of the settlement of a lawsuit in the prior-year period. This beat analyst estimates for revenue by about $10 million. License revenue increased 1% year over year, while services revenue jumped 9.4%.

Now what: Solid revenue and earnings growth coupled with a guidance boost was enough to send shares of VMware soaring. The company also reiterated its $1.2 billion share buyback plan, which it announced last quarter but has yet to begin. Shares of VMware remain down nearly 20% over the past year, but the stock has clawed its way back from lows reached in February. 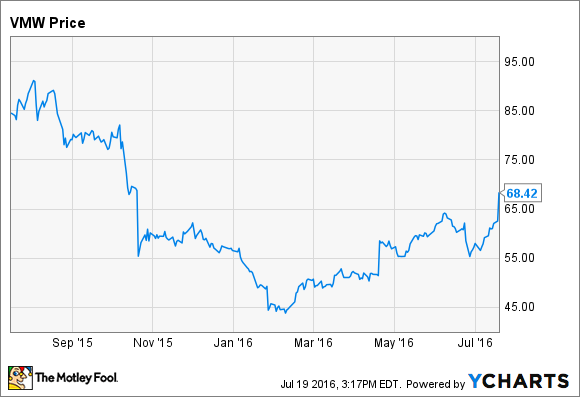 Earlier this year, a management shakeup that saw VMware's COO resign and the announcement of significant layoffs raised questions about the company's strategy. With a solid second-quarter report, VMware has quieted those concerns.

Timothy Green has no position in any stocks mentioned. The Motley Fool recommends VMware. We Fools may not all hold the same opinions, but we all believe that considering a diverse range of insights makes us better investors. The Motley Fool has a disclosure policy.