I get it, there aren't a whole lot of reasons why investors would be excited to invest in oil and gas over the long term right now. The rise of alternative energy options and continued pressure to reduce oil consumption through various means has essentially brought US oil consumption to a stalemate for about a decade. That may be one reason to think that oil consumption might be in decline, but there are 5,795,750,000 reasons why that may not be the correct way to look at where oil will go from here.

Let's take a look at the biggest reason why it's very possible that oil and gas consumption will continue to grow for a long time and why ExxonMobil (NYSE:XOM) is a company that you should probably hold on to in order to reap the benefits of this major trend.

Many of us, either consciously or unconsciously, make investment decisions based on the environment around us. In the US, that means we see things like electrified vehicles popping up here and there and a conscious effort to reduce oil consumption through alternative vehicles and more stringent mileage requirements on new vehicles. Based on this thesis, it can be very easy to make the logical decision that oil demand is headed for a structural decline.

What can be hard for some of us to grasp, though, is that the US represents less than 5% of the global population, and there are a lot of people out there that are in a much different situation than our own.

Let's give an example, according to the CIA factbook, the US consumes about 60 barrels of oil per day per 1000 people. At the same time, 5.8 billion people around the world consume less than 15 barrels of oil daily per 1000 people, that's 80% of the global population living off less than 1/5 what we consume here in the states. What's even crazier is when you break the numbers down even further, the situation looks even more pressing. 75% of the global population lives on less than 10 barrels daily per 1000 people, and just about half of them live on less than 5 barrels daily per 1000 people. Based on these demographics, there is almost no amount of oil and gas consumption reduction that can be achieved in the US and other developed markets that will make up for increased demand from emerging markets.

Let's say, for example, that every country that consumes less than half the amount of oil US consumers do were to boost consumption such that the lowest per capita consumption globally is half that of the US -- 30 barrels of oil per day per 1000 people. In this scenario, global oil consumption would grow by 2.7 times to a staggering 235 million barrels per day. Now, let's even assume that the US and everyone else consuming more than that were to reduce their consumption to 30 barrels daily, that would still require daily oil production of 217 million barrels per day.

This isn't to say that we are definitely going to reach these huge oil production rates. Those kinds of production rates would be extremely difficult to maintain and would likely lead to some very costly prices. As the rest of the world looks to improve their standard of living, though, chances are it's going to require an immense amount of oil to get there unless we are able to develop alternatives that are much, much cheaper and easy to manufacture on a global scale.

Meet that demand and make a decent return along the way

Investing in the oil and gas business can be a tenuous venture. The ups and downs of the industry cycles can make it seem as though you are better off lighting dollar bills on fire than investing in oil and gas. This recent downturn is a great example of that. Companies are going bankrupt left and right, and even the largest, most profitable companies in the business are barely turning a profit. Over the long term, though, great businesses in this industry have the foresight to invest through the ups and downs of the market and return as much cash to shareholders during the boom times. No other company has probably done this better over the years than ExxonMobil.

Consider this for a moment. Even during this recent downturn, ExxonMobil has been able to generate a return on equity of 7.5%. Not great, but pretty solid compared to its peers. What is even more impressive, though, is that this is the first time in almost 30 years that the company has generated less than a 15% return. Think about all the price booms and crashes that have happened in the past 30 years, and yet ExxonMobil's results have been incredibly consistent the whole time. 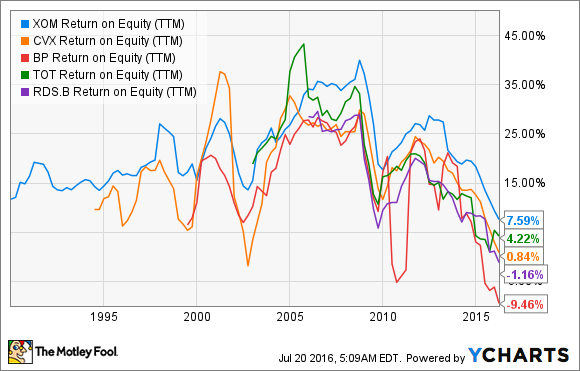 There are no guarantees that ExxonMobil will be able to maintain these impressive returns in the future, but its management team appears to following the same blueprint that has led to this level of success over the years: Invest in the business through the ups and downs of the cycle, pay a regular and increasing dividend, and buy back stock when the company is flush with cash.

One of the hardest things for us as investors to do is step out of our own shoes to view the prospects of a company. When it comes to energy, looking beyond our own borders shows that a vast majority of the world is still in the infancy of improving their standard of living. The more these people strive for a better life for them and their future generations, the more energy will be required, and much of that need will be supplied by oil for some time to come.

Companies will rise and fall to meet that need, but one that has consistently stood the test of time and has handsomely rewarded investors for their patience is ExxonMobil. Based on the company's past performance and the way the business continues to conduct itself, ExxonMobil's stock is one company that is worth hanging on to for a very, very long time.