With Apple reportedly preparing its next smartwatch for a fall debut, what do we know about the Apple Watch refresh?

With the upcoming iPhone 7 increasingly framed as a looming disappointment, Apple (AAPL -1.96%) investors are left groping for silver linings to support the company's struggling stock price. 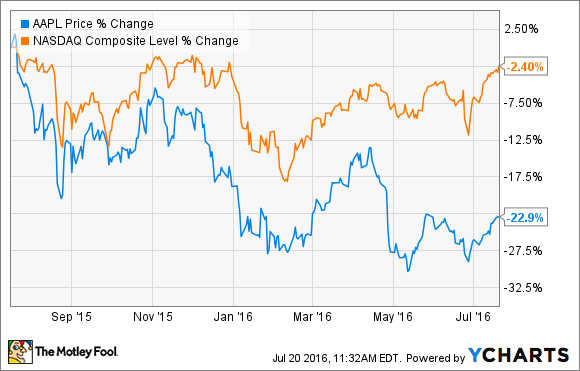 Looking beyond the next quarter or two, long-term investors certainly should see plenty to like in Apple stock. And though Apple's primary financial engine -- the iPhone -- may indeed underwhelm, there's even reason for optimism in other areas of Apple's iDevice lineup later this year.

A new Apple Watch this fall?

After launching its inaugural smartwatch last April, Apple decided to bypass its well-worn 12-month device update schedule for the Apple Watch earlier this year. Instead, the company refreshed the Apple Watch's software and released several new styles of watchbands, which, despite its marketing platitudes, amounted to little more than a moderate improvement. As such, more so than the iPad or iPhone, the Apple Watch heads toward the holiday season in dire need of an upgrade.

Thankfully, one appears to be on the docket.

According to DigiTimes, Apple's component orders have thus far proven more robust than many suppliers expected, given the "disappointing sales" of the original Apple Watch. This suggests that Apple, whose supply chain mastery is widely acknowledged at this point, expects an increase in demand for the forthcoming Apple Watch.

Sources within Apple's Asian supply chain have estimated that the new pace of component orders implies a sales rate of roughly 2 million units each month. Of equal note, as many will likely infer, this suggests Apple's next Watch will include at least some of the features many hoped would appear in the original Apple Watch.

Apple had grand ambitions for its original Apple Watch, particularly regarding its breakthrough potential in healthcare. However, the tech giant reportedly scrapped features to remove many of the more exciting features during the development process because of quality control issues. What about this time around?

Multiple credible sources claim Apple plans to embed cellular connectivity directly in this year's Apple Watch. This means data usage and processing will remain siloed entirely within the latest Apple Watch, removing the device's remora-like dependency on the iPhone for many simple tasks like messaging. Reports unsurprisingly assert the next-generation Apple Watch will also enjoy the usual hardware upgrades -- namely, better, faster, stronger, etc., which also sounds entertainingly similar to the famous Daft Punk song -- found in virtually every Apple hardware refresh. What's less clear is whether Apple will manage to include any watershed new technologies into the next Apple Watch.

Numerous unsubstantiated reports have claimed that Apple will indeed include the much ballyhooed "smart band" capable of monitoring important health data such as "blood oxygen levels, respiratory rate, blood pressure, and body temperature," and perhaps more. However, in the absence of reliable reporting on the matter, investors would do well to temper their enthusiasm for such features making it into the upcoming device, though Apple appears as interested as ever in adding such features in the long term.

This time around, it appears at least some of the original, and most promising, features envisioned for last year's Apple Watch many indeed be ready for their moment in the sun.

Recall, Apple didn't truly nail the smartphone until it debuted the second-generation iPhone 3G in 2008. Said another way, creating devices that have true game-changing potential takes time and iteration, even for a company as skilled in consumer electronics as Apple. So, while the forthcoming Apple Watch may not include every feature consumers hope for, it should still mark an important step forward for the iDevice kingpin.