While there are a lot of similarities, several subtle differences give one shipping stock the edge.

Slowing global trade is weighing on demand for shipping containers. That's impacting Textainer Group Holding Limited (TGH 1.64%), which is experiencing lower lease-renewal rates, and falling realized prices on container sales, both of which are hurting its bottom line. The shipping slowdown is also driving down demand for containerships, which is a potential problem for Seaspan Corporation (ATCO). Given this backdrop, it's no surprise to see that these stocks have vastly underperformed the market during the past year: 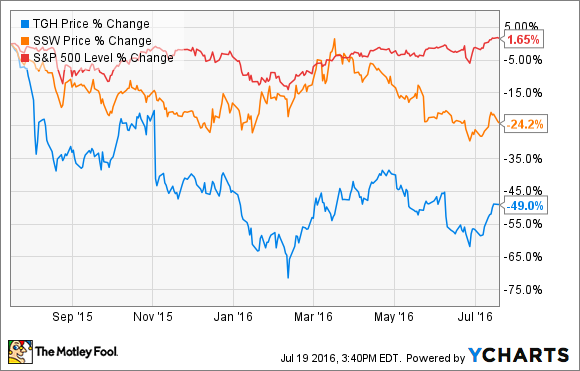 One of the two, however, is better prepared to handle the current downturn. That makes it the better stock to buy for investors who don't have the stomach for the nauseating volatility that the shipping sector is known to produce.

Assets like containers and containerships cost a lot of money to build or buy. Because of that, companies operating in the shipping sector often use liberal amounts of debt to fund fleet growth. That's certainly the case at both Textainer Group Holdings and Seaspan Corporation:

Source: Textainer Group Holdings Limited and Seaspan Corporation. (Data as of the end of the first quarter.)

As that chart clearly shows, both companies have taken on an enormous amount of debt in building their fleets, which are both currently the largest in their respective sectors. Their leverage metrics are a concern, especially given the cyclicality of the sector and the current downturn. Textainer's leverage metrics, in particular, are worrisome, with its interest-coverage ratio plunging in recent quarters, pushing it dangerously close to breaching its financial covenant.

Seaspsan Corporation, on the other hand, has spent lots of time this year to bolster its liquidity, raising more than $850 million to date. It's worth noting that it secured the bulk of that capital during the second quarter, and is, therefore, not reflected in the above chart. Because of that, its balance sheet is improving, which gives it the edge over Textainer Group Holdings.

Aside from the large costs to build their industry-leading fleets, the other reason why both companies borrow heavily is due to the relative security of their cash flows. Textainer Group Holding, for example, typically leases its shipping containers to an initial five-year lease term with subsequent renewals or releases often extending for another three to five years. Meanwhile, Seaspan Corporation leases its containerships to even longer terms, often for a decade or more.

While these business models are similar, Seaspan's long-term focus leaves it less exposed to the current down cycle:

That stronger base is a big reason why Seaspan Corporation's cash flow was up 7.1% last quarter, while Textainer Group Holding's cash flow slumped 20.7%. With fewer contracts expiring this year due to the longer-term nature of its leases, Seaspan Corporation has the better business model for the cyclical shipping sector.

While the maritime transport sector is in the midst of a downturn due to softening global trade, the industry appears poised to turn the corner. According to comments by Textainer Group Holdings CEO Phillip Brewer in last-quarter's earnings release, the company is "starting to see some bright spots" in global trade. In particular, Brewer noted that, "trade is expected to grow 1.5% to 2.5% in 2016," which is an improvement over the less-than-1% trade growth of 2015.

That rising tide should lift all boats. However, Textainer Group Holding has more exposure to the upside of the market because it has shorter-term leases. As such, Brewer said that, "when trade and demand rebound, the impact could be felt quickly."

Seaspan's upside, on the other hand, isn't quite as robust, because most of its vessels already are signed to long-term time charters. Instead, driving its upside are the eight newbuilds vessels scheduled for delivery over the next year-and-a-half. In other words, its earnings will grow even if the market does not improve.

Textainer Group Holdings is a higher-risk, higher-reward stock given its leverage and exposure to both the upside and downside of the container market. Seaspan Corporation, on the other hand, is built on a slightly stronger foundation, which puts in in a better position to withstand the cyclicality of the shipping sector. That, in my opinion, makes it the better buy, because there's no guarantee that global trade will improve as expected.