Alongside rival JPMorgan Chase, Wells Fargo operated in a tough trading environment, but demonstrated underlying signs of improvement. What to look out for.

In a sense, the latest second-quarter results from Wells Fargo (WFC -0.34%) encapsulate the nature of the banking sector of the past few years. Banks are operating in a moderately growing economy containing lots of uneven parts within a low-interest rate environment. It's not an easy environment to deal with -- neither Wells Fargo nor competitor JPMorgan Chase & Co. (JPM 0.60%) managed to grow net income in the quarter -- but the company's earnings contained some signs of future improvement. Let's take a closer look. 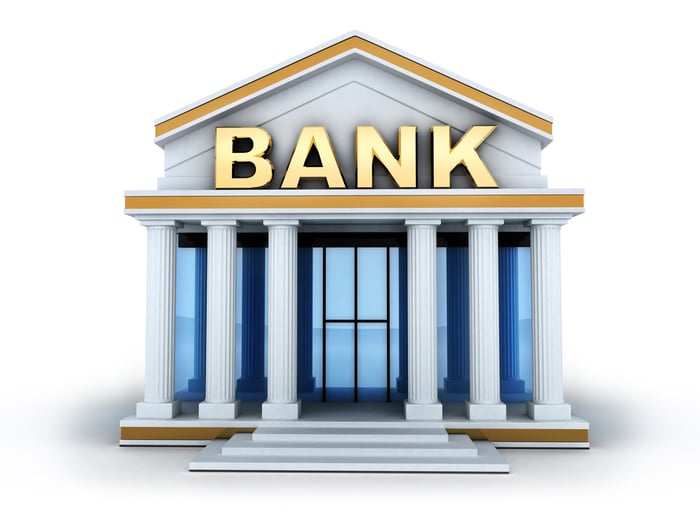 It's a good idea to separate interest and noninterest income from Wells Fargo's results. It's not hard to see why pre-tax income declined 3.8% in the quarter -- it was mainly due to an increase in credit loss provisions driven by deteriorating conditions in the oil and gas sector. Net charge-offs attributable to the oil and gas portfolio increased $59 million from the first quarter, but in a sign of how uneven the economy is, consumer real estate losses were lower by $46 million.

In other words, outside oil and gas, the economy isn't exactly in free-fall mode.

The following chart shows another aspect of the trading environment. In typical economic recoveries, interest rates rise along with the demand for credit, and banks are usually able to expand their net interest margin (NIM). The NIM is simply the difference between the interest generated by a bank's investments and its interest expense divided by its interest-earning assets -- a higher number is better. The low-growth, low-interest rate environment has caused NIM compression, and Wells Fargo isn't getting much help with its NIM. In a similar vein, JPMorgan's interest-rate spread came in at just 2.13% in the quarter. 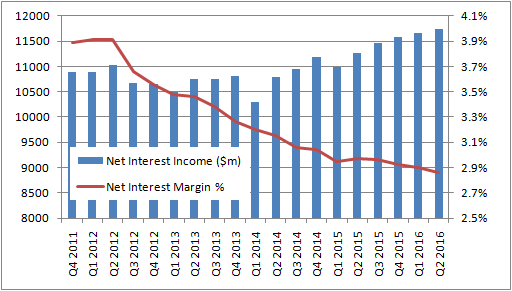 That said, Wells Fargo has been doing a pretty good job of expanding its loan book -- total average loans increased 9% on a year-on-year basis, helped by a contribution from assets bought from GE Capital. The chart above shows how Wells Fargo has continued to grow its net interest income.

However, management maintained expectations for the expense ratio to come in at the high end of its guidance for 55% to 59% -- something to look out for in future quarters. 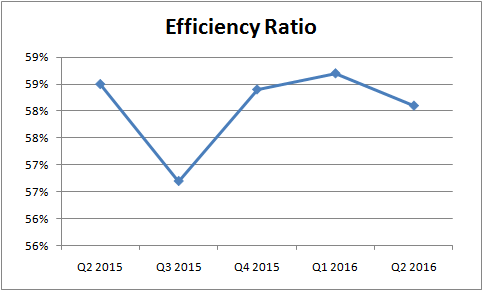 Going forward, the question is whether noninterest income can continue at the 3.8% yearly rate achieved in the quarter. After all, the second-quarter increase of $381 million was buoyed by $195 million in net gains on trading activities and a $203 million gain on the sale of debt securities.

Putting aside the increased credit loss provision -- resulting from the oil and gas portfolio -- Wells Fargo's credit quality remains good. In fact, there was an improvement in the credit quality of its consumer real estate portfolio. Meanwhile, rising oil prices suggest that trends could be about to improve. Indeed, on JPMorgan's earnings call, CFO Marianne Lake argued that "outside of energy, we still have not seen contagion or deterioration in our wholesale or consumer credit portfolios."

Furthermore, Wells Fargo saw home lending applications of $95 billion in the second quarter, up from $77 billion in the first quarter -- suggesting the bank can grow its real estate mortgage book in the coming quarters. Meanwhile, commercial real estate loans were up 8% on a year-on-year basis, with commercial and industrial loans, helped by GE Capital acquisitions, up 14%.

All told, underlying conditions for loan demand appear to be a bit more favorable, even if Wells Fargo's NIM continues to decline. It certainly wasn't a stellar quarter, but in a difficult trading environment, Wells Fargo is doing all it can to sow the seeds for future growth.

Lee Samaha has no position in any stocks mentioned. The Motley Fool owns shares of and recommends Wells Fargo. We Fools may not all hold the same opinions, but we all believe that considering a diverse range of insights makes us better investors. The Motley Fool has a disclosure policy.