Please ensure Javascript is enabled for purposes of website accessibility
Log In Help Join The Motley Fool
Free Article Join Over 1 Million Premium Members And Get More In-Depth Stock Guidance and Research
By Tyler Crowe, Andrés Cardenal, and Todd Campbell – Jul 21, 2016 at 8:06AM

Instead of searching for new stock ideas, we're more interested in picking up more shares of Seattle Genetics, Netflix, and General Electric.

Searching for your next investment can be difficult. Too often investors venture into industries or companies they are less familiar with when the best investment they can make is already in their portfolio. After all, these are likely the companies you know the best, and you probably have a great feel for whether their current stock prices are a decent value or not.

So we asked three of our contributors to highlight a stock they each own that they plan to buy again. Here's what they had to say.

Expanding opportunity for this biotech

Todd Campbell: The commercial-stage biotech company Seattle Genetics (SGEN -0.42%) is back on my radar ahead of important catalysts.

Seattle Genetics markets Adcetris, a drug that targets CD30, a protein expressed on certain cancer cells. Currently, Adcetris is approved to treat Hodgkin lymphoma patients whose disease has returned after a stem-cell transplant or following at least two chemotherapy regimens.

Seattle Genetics is responsible for U.S. and Canada sales of Adcetris, while Takeda Pharmaceutical is responsible for sales in other markets. In the first quarter, U.S. sales of Adcetris totaled $58.6 million, up 20% from a year ago, and Takeda paid Seattle Genetics $32.3 million in royalties, plus a $20 million one-time payment because Adcetris international sales eclipsed $200 million in 2015.

If results from ongoing studies are positive, Adcetris sales could grow meaningfully from those levels.

In addition to Adcetris data, Seattle Genetics also expects to report news in the coming year on SGN-CD33A, a drug that's being studied for use in acute myeloid leukemia (AML), a type of cancer of the blood and bone marrow. Phase 3 trials for SGN-CD33A should begin shortly and early-stage trial data should be reported from a phase 1b study in younger AML patients before year-end.

Since Adcetris sales may benefit from label expansion, and other drugs are advancing through its pipeline, Seattle Genetics might be worth stashing away.

Andres Cardenal: Netflix (NFLX -2.04%) stock collapsed by nearly 13.5% on Tuesday, as investors reacted with pessimism to the company's earnings report for the second quarter of 2016. However, the stock is still one of the most profitable positions in my portfolio -- I bought Netflix in 2013 for an entry price of $30.60. Even after this sharp pullback, Netflix is still trading in the area of $85.40 per share.

When looking at the long-term chart, Netflix stock has proven to be both spectacularly profitable and enormously volatile. The stock has suffered huge setbacks on multiple occasions, and it has consistently recovered over time. If history is any valid guide, short-term dips in Netflix tend to be buying opportunities, and that's why I'm seriously considering buying more Netflix stock if it continues declining over the middle term. 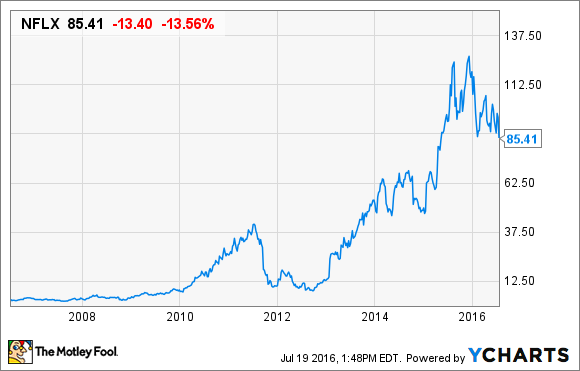 The main reason behind the decline is that user growth was behind guidance last quarter. The company gained 1.7 million new members versus guidance for 2.5 million additions. Gross additions were on target, but Netflix lost more subscribers than expected as the company started "un-grandfathering" members locked in at the older, lower rates and implementing a price increase that affected new members two years ago.

Interestingly, new customers are willing to pay the higher price, but long-tenured members don't take price increases well, even when facing the completion of two years of grandfathering as opposed to a new price increase. With this challenge, management should probably work on better ways to optimize its pricing strategy and communicate its value proposition to customers.

On the other hand, the long-term growth story in Netflix stock is pretty much intact, and chances are that the company will recover from this new setback sooner rather than later.

Putting imagination to work (on my portfolio)

Tyler Crowe: One company that I've bought recently that I plan to buy more of when I get the chance is General Electric (GE 0.31%). Many know it as the ubiquitous industrial manufacturer that makes everything from lightbulbs to locomotive engines, but I'm more interested in it because of the rather miraculous turnaround it has made in recent years and its big push into the next big thing in industrial equipment: the industrial Internet of Things.

Right up until the financial collapse and the following recession, General Electric's management was probably suffering from a little too much hubris. It was venturing into so many outlets that were beyond its sphere of competency: It owned a media companies and had such a massive financial division that it was designated as a systemically important financial institution -- the "too big to fail" label. Now that the company has divested many of these ancillary segments to get back to its core competency of manufacturing, it can take all of that reserved capital to buy back shares and raise dividends.

In the longer term, the company is also looking to dominate the next wave of industrial manufacturing with its Predix data platform. Think of it as the Android for industrial equipment. This software platform is used to connect GE's industrial equipment to the cloud for real-time monitoring that will drastically improve performance through better maintenance schedules and operations optimization. This will help make GE's products that much more appealing to customers -- and likely generate higher margins -- but it will also create more steady revenue streams as customers pay to use the Predix software platform.

5 Top Stocks to Buy for Your Kids (or Grandkids)