If you want to give your kids a head start on investing, giving them shares of V.F. Corporation, Waste Management, Inc., American Water Works Company, Tesla Motors, Inc., or Netflix, Inc. could be a good place to start.

Do you want to give your children or grandchildren a gift that will teach them a lesson that will last a lifetime? Open a brokerage account for them, and buy them shares in a company. There's no better way to teach children about the power of compounded interest than to show them the value of that gift 20 years later.

Do you want to make sure that you buy the type of stock that won't leave a sour taste about investing in the kid's mouth a couple of decades from now? We asked five of our contributors to name a stock that each would buy for a child or grandchild. 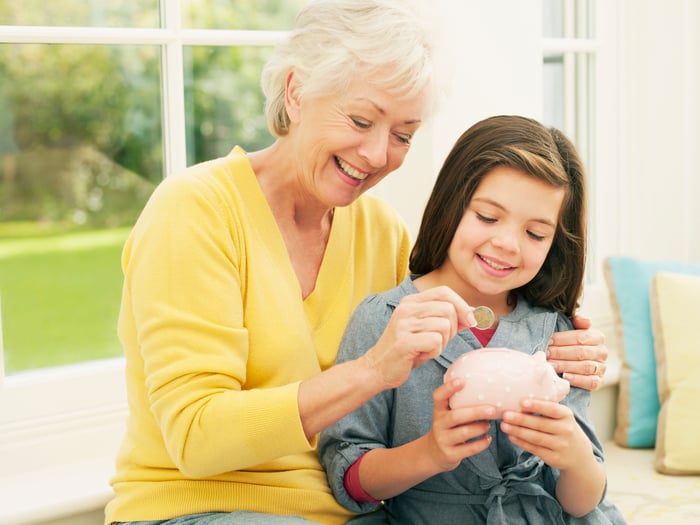 Owning shares of a company that they are able to connect with is probably more likely to accomplish both, but it can be harder to find a long-term winner if you get too caught up in buying them a "cool" stock. VF Corp (VFC -1.27%) can do both.

VF owns some of the most-recognizable apparel, outdoor sports, and footwear brands in the world, including Vans, Timberland, The North Face, 7 for All Mankind, and a dozen others. Chances are that kid in your life is familiar with -- and probably wears -- at least one of the brands owned by VF Corp. 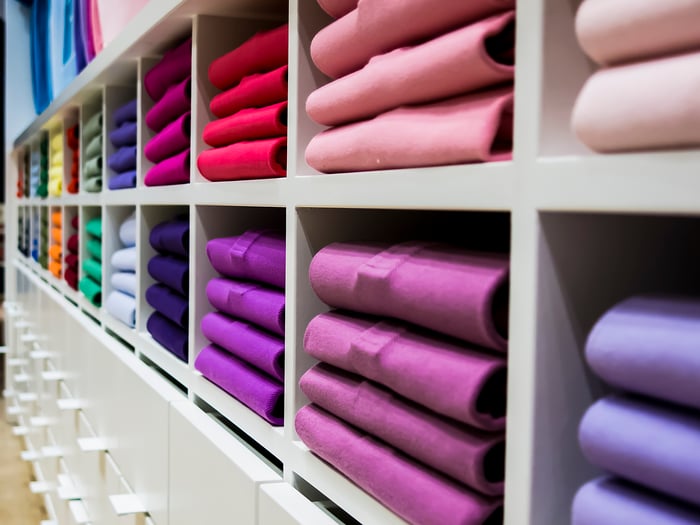 Management has done a tremendous job in a notably fickle industry, where trends can turn on a dime. While some of its brands are on the cutting edge of fashion trends, the majority are well-established staples of the lifestyle they are associated with. The company has also been able to add to its brand stable with well-timed acquisitions during the years, helping fuel growth.

Looking at the long term, VF Corp may just be getting started, considering that less than half of sales are from overseas today. WIth the global middle class set to grow by about 1 billion people during the next couple of decades, this is a great stock your kid can grow up with.

Tyler Crowe: I'm sure that picking a company like Waste Management (WM 0.03%) to pass on to the next generation is like being that crotchety grandpa who gives bad presents at Christmas. However, Waste Management is exactly the kind of stock that they will thank you for later in life.

During the next 30, 40, or even 50 years, there are likely going to be a lot of changes to our society that will significantly alter the way we go about our everyday lives. Companies will rise and fall, consumer trends will change, and technology will continue to disrupt and alter our standard of living.

One thing that will likely be consistent, though, will be that we will continue to produce waste and trash that will need to be handled. That, combined with the high barriers of entry associated with opening and operating landfills, means that Waste Management has a wide economic moat that has a good chance of remaining in tact well into the lives of the next couple of generations.

What also makes Waste Management so compelling is that the company's management has done a great job of generating strong returns for its shareholders. Despite being in a slow-growth business, it has consistently churned out solid profits, a growing dividend, and bought back shares so well that its stock has outpaced the S&P 500 on a total return basis for close to 30 years now. 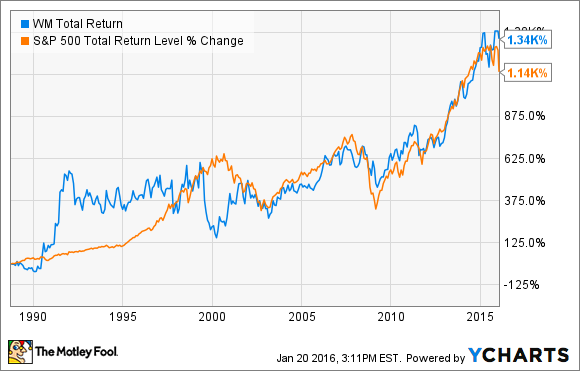 Little Timmy may roll his eyes when he gets shares of Waste Management, but he'll be thanking you decades later.

Beth McKenna: American Water Works Company (AWK 0.05%), the largest investor-owned water and wastewater utility in the United States, is a great choice if your goal in buying stock for a child is generating superior long-term gains, and igniting an interest in investing. A child of any age and socioeconomic class can highly relate to a water company -- it makes a product they all drink and bathe in, and many swim in.

American Water Works stock has generated winning returns over the long term. Since its April 2008 IPO, the stock's total return is 271%, through Jan. 19, crushing the S&P 500's return of 61%. It might surprise many that this so-called "stodgy utility" also beat the highly regarded and commonly recommended stock for kids, Walt Disney, which returned 230% over this period.

Its industry-leading size gives American Water Works growth potential, as it should continue to successfully gobble up smaller utilities in its very fragmented industry. It's also a stable stock because it supplies the most essential product on the planet, making it as immune to macroeconomic factors as a company can get. This isn't true of any of the great number of consumer discretionary companies often recommended as investments for kids.

This feature is key for sparking a child's interest in investing. Like with most things, a positive first or early experience goes a long way. Ideally, you want to choose an early stock for a child that has the best chance of showing gains early on and sustaining them.

Matt DiLallo: Tesla (TSLA 0.17%) is the perfect stock for someone who has an investment time horizon that stretches out for decades. That's because the company itself is built for the future. And while there will likely be a lot of bumps in the road during the years, this is a company that has the potential to drive some powerful returns into a young person's portfolio.

Most people see Tesla as nothing more than a car manufacturer. And while the company does indeed make cars, its focus is really on what powers cars. In fact, the company itself says that it's not just an automotive company, but an energy-innovation company. That's why Tesla is investing $5 billion to build a gigafactory, which will produce batteries at such a high volume that it will lower its cost by more than 30%. All this while emitting zero emissions.

The company's grand plan is to slowly wean the world off of fossil fuels. To that end, it's focusing on making batteries more affordable because that will drive down the cost of electric vehicles and energy storage. It's that energy storage aspect that's often overlooked. It could, however, become a powerful driving force to make renewables a more viable option for more of the world, because the batteries can help alleviate the issue of intermittency when either the sun doesn't shine, or the wind doesn't blow.

Tesla is building a company with the potential to make the world a better place. That really makes it a foundational type of stock for the next generation to build their portfolios around.

Joe Tenebruso: When choosing stocks for children, I look for two things: a long-term growth opportunity and a simple, easy-to-understand business. The first criterion aligns the investment to the child's long-term time horizon, and offers the possibility of sizable capital appreciation. The second makes it easier for the child to relate to the business, and in that manner, can help to foster an early interest in investing -- something that may prove to be even more valuable than the profits from a well-chosen stock. 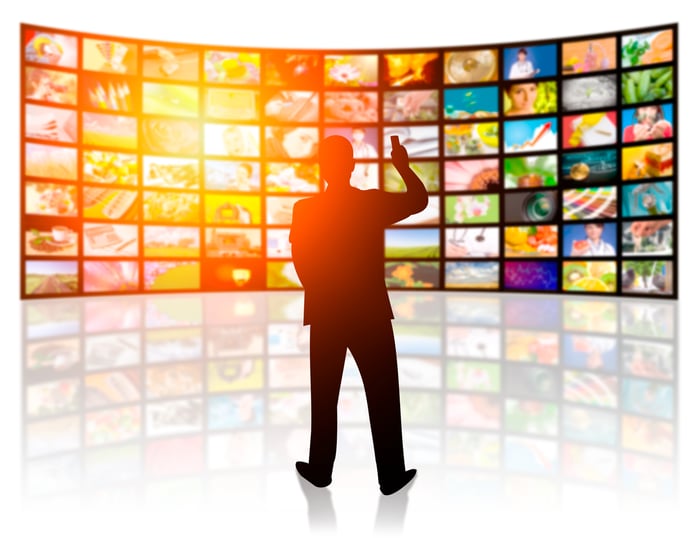 Netflix (NFLX -0.56%) is the type of business that shines in both areas. The streaming-video leader recently completed a major international expansion that nearly doubles its potential market to more than 540 households worldwide. With its services now available in almost every major market in the world, Netflix has become the first truly global Internet TV business -- a position that should allow the company to grow steadily for many years to come.

What's more, it's likely that many children in the U.S. -- and increasingly, the world -- are quite familiar with Netflix. The service offers a huge and growing lineup of kids' shows and movies, making it popular among both children and their parents. As such, Netflix can be a great learning tool -- a familiar company that can be used to explain the fundamentals of business and investing -- that can help place a child on an early path toward a lifetime of investment success.