Comments from both companies strongly suggest that Intel is inside of the next iPhone. 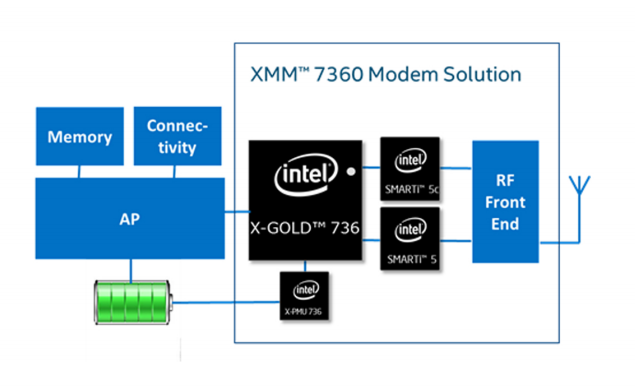 It has been rumored for quite some time that microprocessor giant Intel (INTC -2.88%) is set to provide its XMM 7360 modems for some portion of Apple's (AAPL -1.16%) upcoming iPhone 7 series of devices.

Based on comments from both Intel and Qualcomm (QCOM -1.21%) on their respective earnings calls, it now seems clear to me that Intel is, indeed, inside of the next generation iPhone.

The comments from Intel and Qualcomm

On its earnings call, Intel told investors that during the second quarter of 2016, it began shipping its XMM 7360 modem to customers. Given that Apple is essentially the only major smartphone vendor left that uses stand-alone modems as far as I can tell, it's hard to imagine that Intel is shipping these modems to anyone but Apple.

But, for those who require even more evidence, Qualcomm had the following to say in its own prepared remarks with respect to its chip business:

We are on track to deliver operating margins of 16% or better in QCT in the fourth fiscal quarter and it is important to note that our planning assumptions incorporates second sourcing at our large modem customer.

It's well understood that Apple is Qualcomm's "large modem customer," so it seems quite clear that Apple will be second sourcing from another company. That company is almost certainly Intel.

As far as trying to figure out the order allocations to the two chipmakers, it's hard to get a read. Intel didn't say anything and even Qualcomm's Cristiano Amon said that it's "very difficult for [Qualcomm] to comment specifically about our customer plans with regards to volume and share."

What Intel has to say about its future modem products

Even though Intel appears to have won some share at Apple, investors are likely interested in getting a sense of whether the chipmaker will be able to continue winning spots inside of future iPhones. On the call, analyst Vivek Arya asked the following question:

Thanks for taking my question. For my first one, Brian, I'm curious. There are expectations of Intel becoming successful with your 4G modems in the back half, and I'm curious. How's the longer-term visibility around sustaining growth in the business and just the timing as to when you can bring those products from foundry to your own fabs?

CEO Brian Krzanich began by explaining that in order to "stay on a leading-edge modem" a company needs to "have a yearly cadence of modem technology."

The executive went on to assure investors that Intel does have such a pipeline of modem products and that the company has these products "built out and planned for the next several years."

As far as when the company plans to transition its modems away from third-party manufacturing (Intel currently manufacturers its modems at third-party foundries rather than in its own factories), Krzanich held off on giving specifics.

"We haven't publicly stated when we'll bring it inside, but we clearly plan to," Krzanich said. "We'll do that when the right point of intercepting the road map and getting the right performance off the 14-nanometer is required."

Based on this response, I doubt that the company's follow-on to the XMM 7360, known as the XMM 7480, will be manufactured in Intel's factories. Perhaps the XMM 7560, which was mentioned in a leaked memo from Intel's Murthy Renduchintala, might come in on the 14-nanometer process.