Please ensure Javascript is enabled for purposes of website accessibility
Log In Help Join The Motley Fool
Free Article Join Over 1 Million Premium Members And Get More In-Depth Stock Guidance and Research
By Andrew Tonner – Jul 22, 2016 at 10:36AM

Despite Facebook's advances deeper into live video, Twitter's recent moves to position itself to dominate this increasingly important social media format are worth investors' attention.

For your average $13 billion growth company, this should be something of a foregone conclusion. However, that has certainly not been the case since co-founder and twice-CEO Jack Dorsey returned to the helm last October.

However, with a flurry of recent activity, it appears increasingly clear that Twitter has indeed developed a tenable plan to solve its most existential problem, an important investing narrative its recent deal with the National Basketball Association once more reaffirms.

According to a press release from the league, Twitter and the NBA recently cemented an agreement to significantly expand the amount of original live programming and additional video content that will appear on Twitter and its budding ecosystem of real-time sharing services, Vine and Periscope.

The agreement will bring two more new live broadcasts onto Twitter. The first will be a live pre-game show with newly developed, in-depth features intended to help foster conversation and fan engagement on Twitter's platform. The second program remains in development, though the press release is quick to note it "will also stream exclusively on Twitter."

The NBA has also agreed to expand its content creation efforts throughout the entire calendar year on Twitter, including game highlights and replays, "Day in the Life" takeovers, press conference and interviews, and coverage from its many high-profile events. The NBA says it has plans to monetize this content, at least in part, through a deeper participation in Twitter's Amplify video advertising platform. 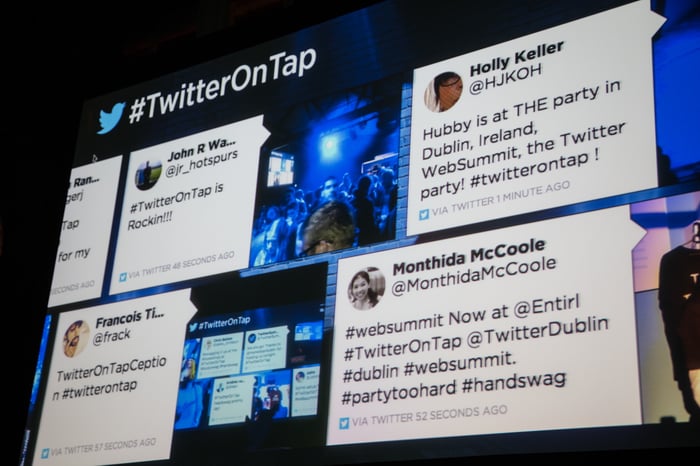 In reaction to the deal, NBA Commissioner Adam Silver was quoted as saying:

We're excited about bringing live content to Twitter, which has proven to be an ideal destination for real-time sports conversations ... This expanded partnership will help feed our fans' growing demand for the NBA by more deeply integrating the league across Twitter's many platforms.

Make no mistake, the sports league arguably leverages the microblogging platform more adroitly than any other, so the NBA and Twitter both stand to benefit from deepening their mutually beneficial relationship.

Video content, and live video content in particular, has been the main focal point of major social networks, most notably Facebook (META 0.62%), this year. Many believed Facebook might have killed Twitter's video ambitions by emphasizing rolling out live video to its 1.65 billion users. However, instead, it appears Twitter may in fact be the platform best-suited to thrive in the public-private arena of live video.

As a starting point, consider the purposes to which Facebook and Twitter were originally intended. Mark Zuckerberg and company created Facebook as a way to stay in touch with people you personally knew. It was only after the platform had reached enormous scale that Facebook began to add things like influencer profiles into the service. And though Facebook has waded deeper into other areas of media, like content syndication, in recent years, its core purpose remains connecting with your friends.

Twitter, on the other hand, was conceived as a quasi-short text status update service, though it quickly exploded in popularity among those seeking an audience: celebrities, athletes, journalists, politicians, artists, and the like. Here are the results of a 2015 survey of Twitter usage from The American Press Institute: 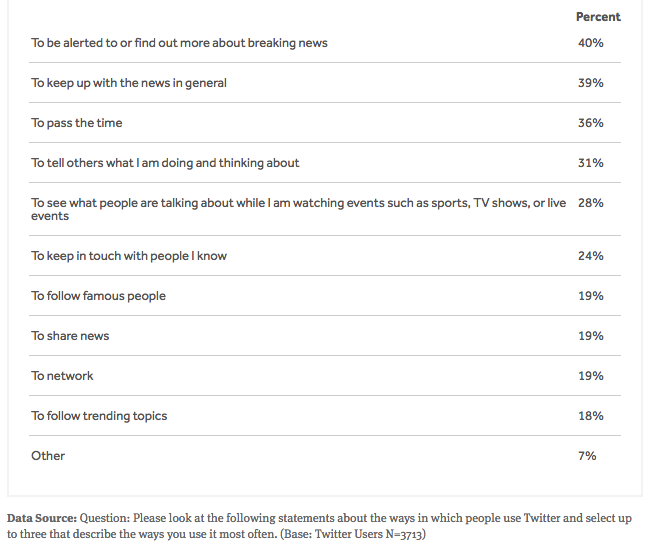 Interestingly, the top five use cases for Twitter involved some form of participation of the broader discussion surrounding public events. If we're trying to identify Twitter's sweet spot as a platform, it's as the digital town square its executives have repeatedly pitched as its ultimate vision.

As such, bringing to the platform as much of that live content on which the public dialogue will focus should help draw a greater number of users into the discussion, while also increasing their engagement on the platform. For a company that has struggled to find a new product or content strategy to solve its user growth issues, this seems like the perfect antidote.

In case you hadn't been paying attention up until this point, Twitter has been diving headlong into live content partnerships in recent months. This spring, Twitter won the rights to live stream Thursday night NFL games over its platform. More recently, Twitter also struck deals with Bloomberg and the National Hockey League to live stream specific content over the service.

The most substantive problem facing Twitter has been its ability to break out of its relative social media niche as the world's digital megaphone. However, rather than reinventing it, Twitter's moves to stream content instead amplify the service's core strength in a way that seems likely to attract more new users. Whether this will work remains to be seen. However, the fact that Twitter appears to finally have developed -- and is in the midst of executing -- a plausible growth strategy alone is worth noting.