More than $2.5 billion in restructuring charges and asset writedowns led Schlumberger to swing into the loss column this past quarter, but management is prepping for a recovery.

Another quarter of declining drilling activity took its toll on Schlumberger's (SLB -5.91%) earnings again, but this quarter's numbers looked even worse as the company took some large charges to the income statement. Despite the dismal numbers, Schlumberger has been a very busy bee these past few months as it has started to pivot toward a strategy that suggests it sees an end to the downturn and the makings of a recovery. Let's take a quick look at Schlumberger's numbers and what it plans to do now that it sees a light at the end of the tunnel for the oil industry.

This quarter continued to be a very tough one for Schlumberger as revenue continued to decline from a lack of drilling activity and service contracts. Bringing Cameron International into the fold helped boost overall revenue to $7.14 billion; a 10% improvement compared to the prior quarter. On a pro forma basis, though, the company saw revenues decline 14% sequentially and 38% year over year with large declines in both North and Latin America. This decline also put a lot of pressure on margins as pre-tax income margins fell to 10%. That sounds pretty weak compared to last year's 19% pre-tax margin, but it's still well ahead of its peers. Halliburton (HAL -5.33%) reported an adjusted operating pre-tax margin of just 1.6%.

For the quarter, the company posted a net loss of $2.1 billion, or ($1.56) per share. That loss includes charges related to letting go some of its personnel and writing down assets. Total one time charges came to $2.54 billion. If we strip out those one time charges, net income was a more palatable $0.23 per share in earnings.

With the addition of Cameron, Schlumberger has changed up the way it reports its revenue and earnings. Rather than giving pre-tax profits for geographic regions, it instead breaks them down by operating segment. Here's how pre-tax income broke down for the company this past quarter. 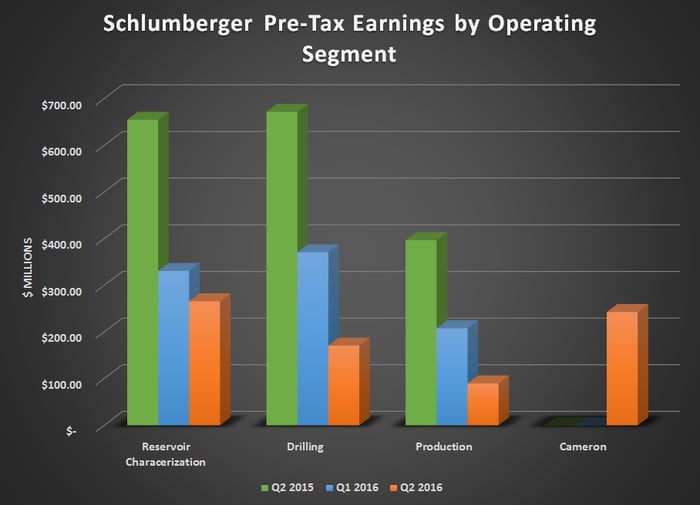 The big news this quarter was that the company finalized the deal for Cameron International, but that was actually only one of the four acquisitions it made this quarter. On top of the big Cameron deal, Schlumberger also snatched up three smaller oilfield services and equipment companies. The total cost for these three deals weren't disclosed, so chances are they were pretty small deals overall.

... and a shift in strategy

For the past two years, Schlumberger's priority has been maintaining margins by carving out as much operational costs as possible. This quarter marks a slight change in strategy, though. According to CEO Paal Kibsgaard, the company is now shifting to protecting its market share rather than its margins.

As the downturn has developed, we have changed our focus from managing decremental margins to further strengthening market share where we have been seen a significant increase in our tender wins. As oil prices have nearly doubled since January 2016, we are now shifting our focus to recover the temporary pricing concessions that have been made, and to renegotiate contracts with limited promise of longer-term financial viability

The deals that were mentioned were a great example of the company looking to boost its market share, and the company has the strength to do it. At the end of the quarter, the company generated $260 million in free cash flow even after paying its quarterly dividend. Also, the company's balance sheet is in pretty decent shape with over $10 billion in cash and a net debt to EBITDA ratio of less than one. With the turnaround in drilling activity poised to take place sooner than later, using the company's cash generating abilities and balance sheet strength seem like a pretty wise move today.

There isn't much that Schlumberger can do to boost drilling activity in the oil and gas industry, that's up to the producers and whether or not they want to spend money on growing production. What Schlumberger has been able to do is control its costs to remain profitable and in good financial standing when the market does recover, and it has done it rather well, as we start to see the industry finally wake up after its more than two year hibernation, Schlumberger's recent quarterly results suggest that it will be ready to pounce on new opportunities.

The Motley Fool owns shares of Halliburton. We Fools may not all hold the same opinions, but we all believe that considering a diverse range of insights makes us better investors. The Motley Fool has a disclosure policy.