The super-efficient railway operator is set to report earnings on July 25. Can it continue exceeding expectations with low costs and strong returns?

Railway giant Canadian National Railway (USA) (CNI) has consistently done an excellent job of managing costs, routinely delivering the lowest operating ratio -- that is, the percentage of its revenues used to cover operating expenses -- of any major North American railroad. And while the U.S. dollar's strength against the Canadian dollar has had a positive impact on its bottom line (the company reports in Canadian dollars), there's still no arguing that it operates incredibly efficiently.

What should investors expect when CN reports earnings on Monday? Here's a closer look (Editor's note: Unless specifically noted, all dollar amounts are listed in Canadian dollars).

Canadian National has exposure to a number of industries, some that are doing well, and others  in downturns. Here are the ones that are suffering, and how they matter to CN:

On the other hand, these are the strong segments that could show growth:

In summary, there are strengths and weaknesses both. But CN's management has taken steps to diversify its revenue sources to help offset cyclical weaknesses.

For years, CN has made a habit of returning a significant amount of profits to shareholders: The company has consistently increased its dividend over the past decade, raising it by 300% (measured in U.S. dollars) over that period. The best part is that earnings growth has been the principal driver of dividend growth. As you can see above, the payout ratio over the past eight years has stayed between 25% and 31%.

At the same time, CN has aggressively repurchased shares: 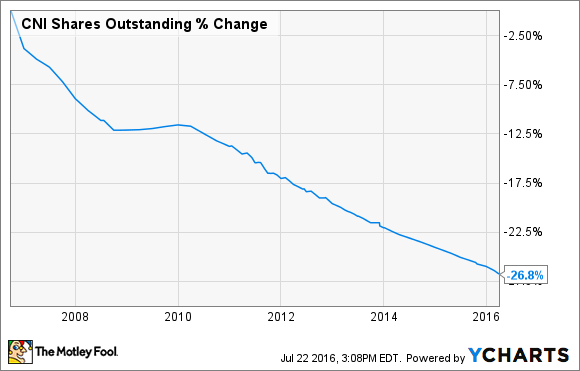 By focusing on growing a relatively conservative dividend and being more aggressive with share buybacks, the company has been able to regularly increase its dividend; stock buybacks, by contrast, have fluctuated over time as cash flows have allowed.

CN management has stated that this will remain its strategy going forward, though it does plan to be slightly more aggressive with its dividend, targeting a payout ratio of 35%, slightly above the historical average.

Like any company whose business is largely tied to industrial and consumer demand, CN's  results will be affected by economic cycles. And while that's unavoidable, its management has done a solid job of focusing on the things it can influence -- namely managing costs, finding ways to keep its operations as efficient as possible, and investing in growth opportunities in order to limit the impact of cyclicality on its operations and financial results.

Keep these things in mind when the company reports earnings on Monday. It may not completely eliminate the cyclical impacts on CN's business in the short term, but this approach has made it a long-term, market-crushing investment: 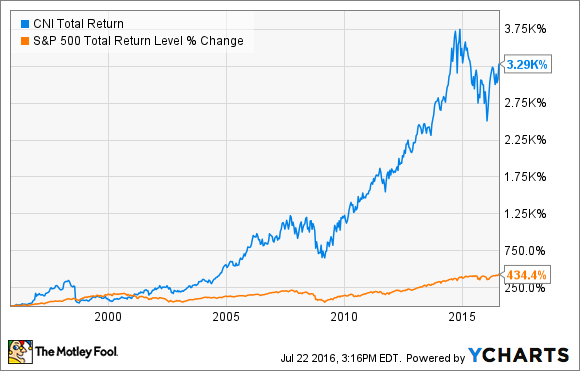 Only time will tell if those historical patterns continue, but I'm not one to bet against a company that's figured out what it's good at, and then keeps doing it. Tune in for more coverage following CN's Monday earnings release.

Jason Hall has no position in any stocks mentioned. The Motley Fool owns shares of and recommends Canadian National Railway. We Fools may not all hold the same opinions, but we all believe that considering a diverse range of insights makes us better investors. The Motley Fool has a disclosure policy.

After a Derailed Merger, Canadian National Gets Back on Track
376%