Kite Pharma, NantKwest, and Editas Medicine are working on game-changing ways to fight back against cancer.

The war on cancer is moving into a new era as an improved understanding of cancer's genetic makeup ushers in new, next-generation anti-cancer weapons. Kite Pharma (NASDAQ: KITE), NantKwest (NK) and Editas Medicine (EDIT 1.89%) are among the companies operating at the forefront of cancer-therapy innovation, and their breakthrough potential makes them worth watching.

Although a few companies are working on CAR-T therapies, Kite Pharma appears to be closest to FDA approval.

The company's lead CAR-T is KTE-C19. This targets the C19 protein that's commonly expressed in B-cell cancers such as diffuse large B-cell lymphoma (DLBCL). The company hasn't released phase 2 study data yet (it's expected later this year), but results from phase 1 trials show that 71% of DLBCL patients respond to KTE-C19. That's very good, considering that patients participating in this trial are among the toughest to treat in the indication.

If similar response rates occur in the phase 2 study, Kite Pharma plans to file for FDA approval of KTE-C19 in DLBCL before the end of 2016. Assuming management executes on that timeline, then KTE-C19 could win a FDA green light in 2017. Ahead of such an approval, Kite Pharma has already built a facility that can produce up to 5,000 KTE-C19 patient therapies per year.

NantKwest's NK cell therapies are off-the-shelf, ready-to-use treatments that don't require patient matching. The company's NK product pipeline includes NK cells that have been modified to release toxic granules through cell-to-cell contact. Additionally, the company is working on NK cells that are engineered to work alongside cancer-killing antibodies, like Herceptin, and NK cells that incorporate CARs and that work similarly to CAR-T therapy (potentially) with better safety.

The company anticipates it will have interim data from a phase 2 study of its NK therapy in Merkel cell carcinoma later this year. Its other research is in even earlier stages, so this is admittedly a very new and emerging area of research. However, risk-tolerant investors might still want to consider owning this company, in part because it's run by billionaire healthcare entrepreneur Patrick Soon-Shiong.

Soon-Shiong's track record includes creating two multibillion-dollar companies, including Abraxis, which he sold to Celgene for $3 billion in 2010. Soon-Shiong's experience in ushering products across the finish line may give NantKwest a valuable edge over companies with less experienced leadership. 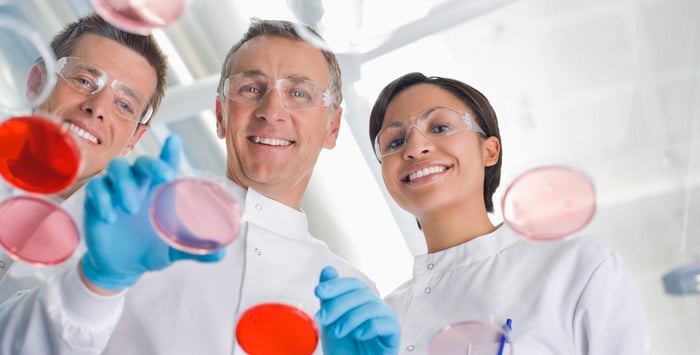 Bacteria have an intriguing way to battle pathogens. When a virus attacks, bacteria memorize a bit of its DNA within their genetic code. This code is stored in repeating spaces in the genetic code called clustered regularly interspaced short palindromic repeats (CRISPR). Once stored, bacteria can team up that bit of genetic code with CRISPR-associated proteins (Cas) to edit the invader's genetic code and prevent it from replicating.

Editas' research is only in the earliest of stages. However, the concept is incredibly intriguing, and that makes this company one worth watching.

Kite Pharma, NantKwest, and Editas Medicine aren't making any money yet, which means that they're risky bets for investors. However, these three companies are developing truly unique cancer-killing approaches that could conceivably revolutionize cancer treatment -- and that makes them intriguing companies to consider stashing away in risk-tolerant, long-haul portfolios.