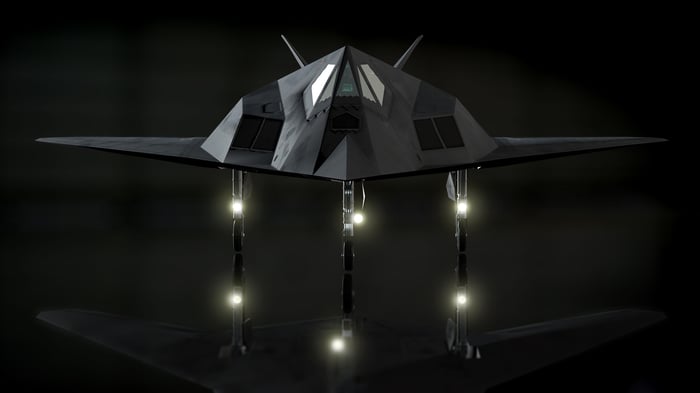 The U.S. Navy doesn't yet have an operational combat drone capable of flying off of aircraft carriers (although it used to have two of them). But that could very well change in the next decade -- and that has big ramifications for defense investors. Here's what you need to know.

X-47B. That was what the Navy used to call the two experimental, carrier-capable combat drones Northrop Grumman (NYSE:NOC) built for it a few years back under the Unmanned Carrier Launched Airborne Surveillance and Strike (UCLASS) program. X-47-B was the first combat drone ever to land autonomously aboard a U.S. aircraft carrier (and take off from same). In years since, as the Navy's plans for the aircraft evolved, the X-47B has also been called the "Carrier Based Aerial Refueling System," the "CBARS" (for short), and also the "RAQ-25A," the "MQ-XX," and currently, officially, the "ZMQ-25A."

Most of these names refer to a single hoped-for weapons system, which the Navy ultimately expects to call the MQ-25A Stingray, and it's expected to be a wonder of a craft. Once operational, the Navy expects to use the autonomous take-off, autonomous-flying, and autonomous-landing drone primarily as a flying gas station for Navy fighter jets. But already, the Navy is forming plans to add "a little bit of ISR (surveillance equipment)" to MQ-25A's capabilities and, eventually, to add "weapons later."

That's according to deputy chief of naval operations for integration of capabilities and resources Vice Adm. Joseph Mulloy.

Who will build it?

How much "ISR," what kind of weapons, how much fuel it can carry for refueling duties -- all of these attributes remain very much up in the air. But these requirements could prove important to figuring out which company might be asked to build the MQ-25A Stingray.

Current plans call for the Navy to issue an official Request for Proposals (RFP) from all of the big players in drones -- Northrop Grumman, industry behemoth General Atomics, and probably Boeing (NYSE:BA) and Lockheed Martin (NYSE:LMT) as well -- sometime in 2017. Deliveries might begin as early as 2021.

Northrop and Lockheed are both expected to proffer stealthy designs (such as what Northrop's X-47B featured, and what Lockheed Martin's F-35 boasts) tailored toward allowing Stingray to evolve into long-range surveillance and strike roles. Boeing and General Atomics, most of whose aircraft are less stealthy, can be expected to emphasize the more immediate need for a long-endurance refueling aircraft. That said, both Boeing and General Atomics have stealthy "flying wing" designs as well, so they should be able to compete no matter what requirements the Pentagon puts into its RFP.

And what will they get?

As for how much money the winner might receive, well, assuming the Navy chooses to build on the X-47B's success, much of the development work has already been done by Northrop. With only $89 million slated for development currently, it appears likely the Navy will build on the knowledge purchased through the $744 million invested in X-47B and put that to use in developing MQ-25A. Ultimately, though, the Navy is expected to spend as much as $2.2 billion more on the project over the next five years -- and probably even more in outlying years, as the plane's capabilities, and missions, evolve.

It's not as big as the $55 billion stealth bomber contact, granted. But it should be enough to make the competition interesting.