Please ensure Javascript is enabled for purposes of website accessibility
Log In Help Join The Motley Fool
Free Article Join Over 1 Million Premium Members And Get More In-Depth Stock Guidance and Research
By Travis Hoium - Jul 23, 2016 at 8:08AM

Drones are coming and they may be used in places you never imagined. 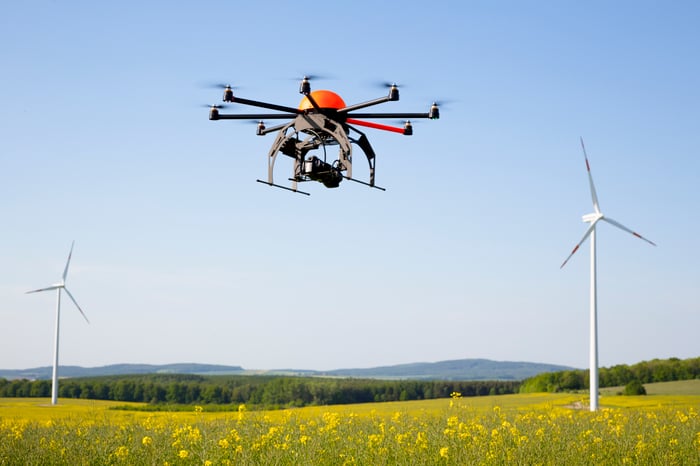 The utility of drones in the commercial market is just starting to be discovered, and one place where they may go into use rapidly is in the energy industry. There are myriad applications in which companies may use drones, and with regulations recently being opened up by the Federal Aviation Administration, they're starting to be deployed in the field. Everything from solar fields to transmission lines to oil fields could use drones in the near future.

Where energy drones will start popping up

Drones in energy isn't exactly a new concept. They were first tested in oil exploration and inspection of assets. AeroVironment (AVAV 4.15%) and Boeing (BA 6.45%) have both launched commercial drones to capture image, topographical, and other data for oil companies in Alaska. As they've demonstrated the value drones can offer, the FAA has gotten more comfortable with their use and so have other energy companies. But this is just the beginning.

Another company testing drones is Duke Energy (DUK -0.62%), which is hardly the first company that comes to mind when you think of cutting-edge technology. Its drones inspect equipment and solar panels with infrared cameras, identifying defects more quickly than manual inspections. The utility-scale solar industry could be a rapid adopter of drones because inspection and cleaning of panels are key to optimal energy production and drones could save costs over human labor.

It's on the utility side where I think we'll see a lot of drone advancement over the next decade. Utilities can use drones to inspect transmission lines, perform security at power plants, inspect solar and wind farms, and assess damage after storms.

On a smaller scale in solar energy, drones could be used to inspect residential solar systems more quickly. It could take images of an installation as it's going up and an inspector could use it to reduce time spent on the roof. As regulations open up, this could increase the data companies receive about installations and improve the quality of solar installations.

Natural disasters could be a game changer

Where we could see some early movement in drone acceptance in energy is in the case of natural disasters. Today, crews need to be deployed to assess damage, which can be an inefficient way to deploy scarce resources. Drones could add immense value for utilities, regulators, and drone companies when storms strike.

This may be where AeroVironment's and Boeing's longer duration, higher-altitude drones can add real value over the quad copters that currently dominate the drone market. They can take images of a wide swath of land and their technology is more robustly tested than that of competitors.

Look for drones on the horizon

Pulling 1% or 2% more energy out of a solar farm or wind turbine may seem small, but when you multiply that efficiency over tens of GW of energy production, the potential economic value adds up quickly. And utilities may end up leading the way in their use of drones to make energy more efficient.

Energy may not seem like an early mover for drones, but it makes more sense than to deploy them in the energy sector than for package delivery (I'm looking at you, Amazon). And with a clear economic case to be made, I think it's a matter of time before we see drones hitting the skies from some of the country's most forward-looking utilities.