It's been tough going for North American steelmakers during the past several years. While North American demand for steel is near all-time highs, international competition -- much of it illegal dumping -- has been taking a big bite out of the domestic pie.

This has weighed heavily on the industry, which has seen revenues plummet: 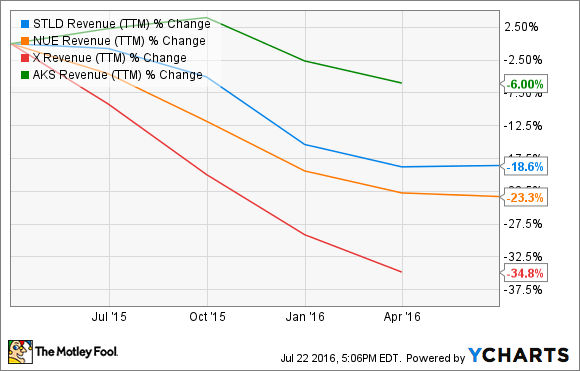 While its competitors have struggled, Nucor Corporation (NUE -0.03%) steadily has held its own, even in this competitive environment, posting steady positive cash flows and profits, even as revenue has slipped. The quarter reported on July 21 was no exception. Actually, it could be an indication that profits are ready to surge at Nucor.

Nucor continues to grow its market share, even in an ultra-competitive environment. CEO John Ferriola:

Nucor's steel mill volume growth in 2016 highlights our success in gaining profitable market share. For the first six months of 2016, our steel mill production increased 13% over the year-ago period. That compared with the U.S. steel industries' decrease of approximately 1% over the same period.

Nucor has been able to grow in large part because of its model as the low-cost leader in the industry. The company's "mini-mills" are more scalable than the mills operated by many of its competitors, allowing Nucor to operate profitably at lower volume levels, and to quickly scale up production at need. The company's recycling efforts also play a big role here. CFO David Frias:

A challenging competitive environment and low commodity (scrap and iron) price continue to weigh on revenues across the industry, and Nucor's peers continue to see their volumes shrink. But Nucor is expanding, taking advantage of its ability to profit even in this environment, and adding more products to its mix. These include more structural steel, wider sheet steel, beams for construction, and additional heat-treating and cold-finishing systems to offer more value-added products.

As a result, management expects to see "further strong improvements" in earnings next quarter. This is due to a number of factors including price resets on contracts for sheet steel, which represent approximately 60% of sheet-mill volume, as well as the improved scrap prices that benefited this quarter, as well as overall improvements in operating leverage as volumes increase further.

While imports continue to weigh on the North American steel industry, Nucor has proven it can thrive in nearly any environment. If further progress is made to reduce imports, Nucor is likely to be one of the biggest beneficiaries. Either way, the numbers don't lie: Nucor continues to be the best-run and most-profitable steelmaker in North America.

Jason Hall has no position in any stocks mentioned. The Motley Fool recommends Nucor. We Fools may not all hold the same opinions, but we all believe that considering a diverse range of insights makes us better investors. The Motley Fool has a disclosure policy.