Consumers and merchants are rapidly adopting Venmo and One Touch. 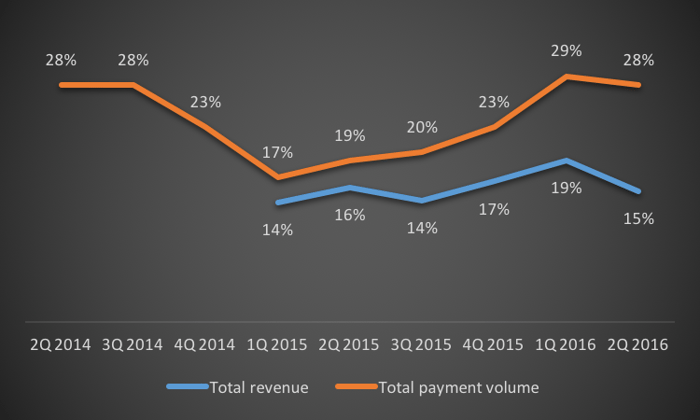 However, despite accelerating volume and revenue growth over the last year, the stock hasn't significantly outperformed the broad market over the same period. Paypal shares were only up 4.5% in the year leading up to this earnings report, just ahead of the S&P 500 which returned 2.4%. Part of the hesitation from investors has been concerns about increasing competition from deep pocketed companies, including Apple, Alphabet, Amazon, and Samsung. However, those concerns appear to be overblown. Judging by the numbers above, Paypal has shown itself to be a formidable competitor, and it is also proving to be an innovator with some promising growth initatives.

While obviously not at the scale of Google and search, Paypal is frequently used as a verb when it comes to sending and receiving money. However, also becoming more popular these days is the term "Venmo me", particularly with the millennial generation.

Venmo is a Paypal-owned mobile app that quickly allows users to transfer money to one another. It is frequently used to split a dinner check, Uber rides, or even rent payments. So how big has Venmo become? In its latest quarter, Venmo processed $3.9 billion in payments, up 141% over the year prior.

Paypal hasn't reported the profitability of Venmo, but it's likely not much, if any. The service is free to use if payments are sent and received from a bank account. Users can also link a credit card to their Venmo account for a 3% fee, but the bank account option is far more attractive. Overall, the application has created a very sticky user base and in turn, a strong network effect.

Paypal plans to monetize that network with a service called Pay with Venmo, which allows merchants to accept payment via the Venmo app. In the second quarter, Venmo expanded the pilot program by adding eight next-generation apps that accept Venmo. It is also growing the program -- from one million users to 3.5 million over the past quarter. The company plans to make the service available to all Venmo users in the second half of the year.

Stop me if you've heard this one before. You see something you like online. You decide to buy it. You begin the checkout process and are asked to register as a user. After filling out a lengthy form, creating a fake mother's maiden name, and waiting five minutes for a verification email to show up in your junk folder, you go to check out. Then you log into your new account, enter shipping information, a coupon code, and confirm your order. Although not necessarily as painful as shopping at a department store, the online checkout process can be cumbersome. For merchants, it can often result in lost sales.

According to data from comScore, if a customer selected Visa Checkout as a payment type, only 51.1% of customers completed a transaction. With payment forms other than Paypal and Visa Checkout, that conversion rate was even lower at 45.6%. But with Paypal's One Touch service, merchants were able to convert 87.5% of transactions.

Customers who activate One Touch have their PayPal login information stored securely on their device. When logged in, users can check out at eligible merchants without going through the traditional lengthy process. According to PayPal, One Touch has become the most rapidly adopted product at the company. In its latest earnings report, PayPal reported 25 million consumers and two million merchants as adopters of One Touch. This is up from approximately 21 million consumers and over one million merchants in the first quarter of this year.

In the intensely competitive payment space, PayPal appears to be a step ahead. One Touch has allowed consumers and merchants to complete a transaction with minimal friction. With Venmo, PayPal is increasing its share in mobile. Gabrielle Rabinovitch, PayPal's senior director of investor relations, made the following comments on its mobile volumes:

Mobile is arguably the most competitive arena in the digital payments ecosystem, and PayPal continues to widen its lead and gain share. Two quarters ago, we grew our mobile volumes 45% year-over-year, last quarter 54%. And despite a substantially increased base of mobile transactions, we grew 56% this quarter.

PayPal's stock performance may not have matched its business performance over the past year. However, given the companies prospects with Venmo and One Touch, investors should have plenty to look forward to.