With just one exception, American Capital Agency, all of the stocks and funds above have not only paid consistent monthly dividends, but increased their dividends to investors over the last 5 years.

Realty Income is the undisputed leader in monthly dividends. The company specializes in long-term triple-net commercial leases wherein its tenants are responsible for property taxes, insurance, and maintenance. Its average lease is currently scheduled to last 10 more years.

Net leasing places many of the risks of owning a building on the tenant, thus giving the Realty Income more visibility into its future cash flows. Its top tenants are listed in the table below. 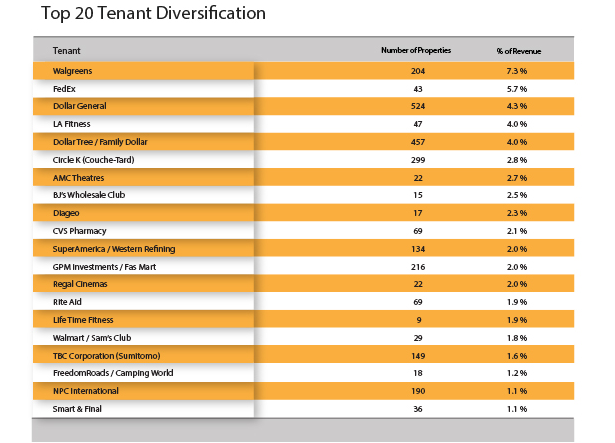 Investors have taken notice of its historical record, and rarely let the company trade cheaply. Shares trade at about 19 times its estimated funds from operations (a common measure of earnings) in 2016.

EPR got its start as a REIT that owned just a handful of AMC Theatre locations, and it now owns 139 megaplex theatre properties, by far its biggest earnings driver, making up about 43% of its net operating income, according to a recent presentation. Shares currently trade at about 15 times its adjusted FFO guidance for 2016, and about 14 times its 2017 guidance. 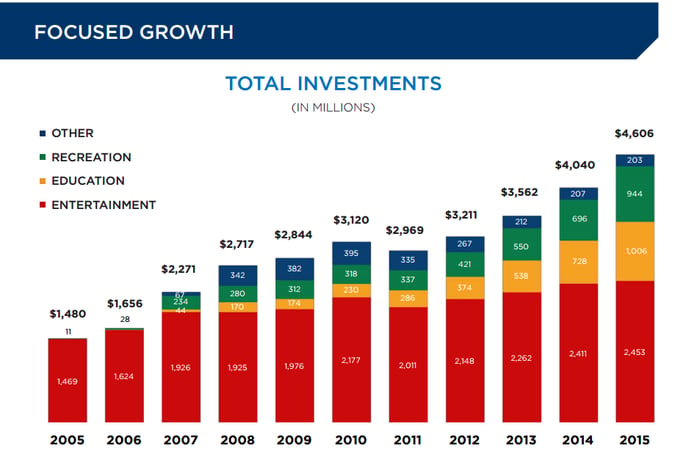 LTC seeks to reduce its risks by writing so-called "master leases," so that its tenants, many of which lease several properties from the company, cannot back out of a lease on a single property. These contracts are especially important given its limited operator diversification -- just four companies produce about 45% of its annual leasing income. 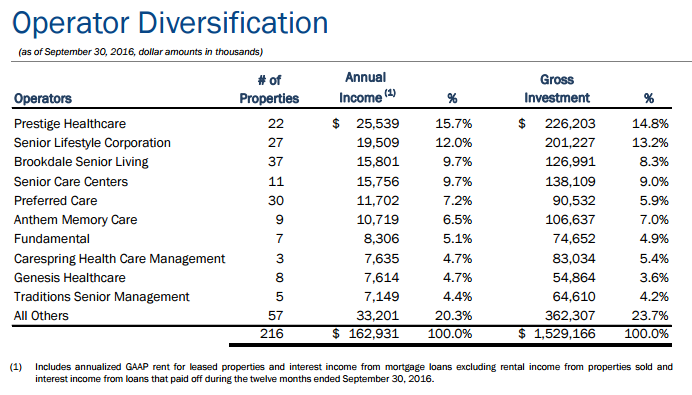 Like many of the above REITs, its record and opportunities for growth haven't gone unnoticed. LTC Properties currently trades for about 15 times its FFO guidance for 2016 issued in the third quarter.

Finally, American Capital Agency is something of an outlier on this list in that it is a mortgage REIT. The company uses borrowed money to buy agency mortgage-backed securities, earning income based on the spread between its borrowing costs and the yield on its investments. You can think of American Capital as something like a bank that, instead of operating branches to collect deposits, raises funds to invest from banks and the capital markets instead.

Earnings for the company are inherently volatile, as interest rate fluctuations result in unrealized gains or losses on its investment portfolio. However, its long-term earnings power is at its strongest when spreads between short- and long-term rates are highest, as it borrows short-term capital at lower rates to invest in long-term mortgages at higher yields.

Recently, spreads have widened as long-term interest rates have increased faster than short-term rates, which could boost its earnings power over time.

If individual stock picking isn't your thing, or you'd like a more-diversified portfolio of stocks, consider monthly dividend exchange-traded funds. A pioneer in the category, some of WisdomTree's best ETFs are its monthly dividend ETFs, which are broken down into small-, mid-, and large-cap funds. Their fees are low, and their performance has been exceptional.

Unlike other monthly dividend ETFs, these funds don't simply chase the highest-yielding stocks on the market. Instead, the funds weight their portfolios by expected total dividends a company will pay over the next year, rather than by dividend yield alone, an interesting twist that protects it from investing in the highest-yielding companies that may have the most suspect dividend policies.

WisdomTree's dividend-focused funds have easily outperformed the majority of other value-focused peers over periods spanning the last one to ten years, suggesting that its differentiated process has merit.

Importantly, these funds can fit very well into a diversified portfolio by swapping some of your traditional small, medium, or large cap exposure for a higher-yielding ETF that invests similarly.