The powersports vehicle maker is going to have a tough time maintaining its torrid pace of growth.

Indian Motorcycle's ability to attract new riders to its brand has been a powerful jolt for sales, but it's going to become more difficult to keep the momentum going. Image source: Indian Motorcycle.

Polaris Industries' (PII -2.74%) motorcycle sales jumped 23% in the quarter as all brands gained, and the company reported North American retail demand for bikes 900cc and up was higher, landing in the mid-teens compared to a mid-single-digit percent decline for the industry, suggesting it was taking market share. But the sales growth rate was cut in half from this time last year. That means growth is slowing and could be a cause for caution.

Considering the impact the big recall on Polaris' popular RZR side-by-side has had on the powersports vehicle maker, its second-quarter earnings report surprised many because it surpassed analyst expectations. Yet there may be some yellow flags lurking behind the seemingly solid effort.

While Polaris makes most of its money on off-road vehicles, accounting for 71% of total revenue this past quarter, its motorcycle division is where it's been gaining the most mileage lately. It may have been making the burly Victory bikes for years, but it wasn't until it bought the rights to Indian Motorcycle out of bankruptcy that sales jumped off the line.

After resurrecting the nameplate in 2013 with the introduction of three models, motorcycle sales nearly doubled, an amazing achievement since they were only selling for part of the year. Polaris followed up that performance the next year with 250% growth from the Indian brand, and as it expanded its selection of models available, North American retail for Indian jumped another 80% in 2015.

Because it was starting from a negligible base, such torrid early growth is not unexpected, and Polaris' ability to maintain a hot hand showed consumers were keenly looking for another big American-made bike. Harley-Davidson (HOG -0.85%), although it owns half the 601cc and above category, became so ubiquitous that it lost some of its cachet. Polaris, with Indian Motorcycle's own storied history, filled a gap that Victory could not and Harley has been caught now in several years of falling sales. There's still a yawning gap between it and Polaris, which quickly leapfrogged the competition into second place, but Polaris continues to nibble away at its rival's lead.

Easing back on the accelerator

This is why the slowdown in the rate of sales growth may be a concern for Polaris investors. When sales growth drops by 50% or more year over year, that should be a red flag for investors. And it doesn't matter if we're talking about growth of 150% one year followed by 75% growth the next -- or in Polaris' case, more than 100% growth and then 20%. Even though we all know such phenomenal rates are impossible to sustain, such slowdowns often portend future problems, even earnings shortfalls. 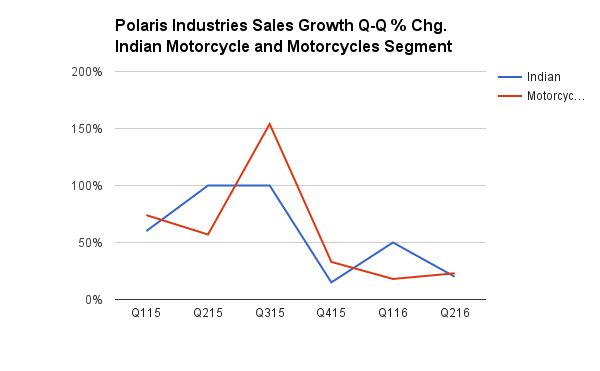 The difference here, though, is that motorcycles are still a small portion of Polaris Industries overall revenues stream. Despite the phenomenal growth Indian Motorcycle sales have enjoyed since their reintroduction, and its been carrying the segment all along, the division only accounts for 20% of sales. That segment includes both Victory bikes and Polaris's three-wheeled Slingshot, which was introduced around the same time as Indian and has enjoyed surprising popularity. Ultimately, though, RZRs, Rangers, and snowmobiles are still where it's at for the powersports vehicle maker.

It doesn't appear investors have anything to worry about just yet with Indian sales or its motorcycles division yet. While there is a broadening softness in the market for big bikes that both Polaris and Harley-Davidson acknowledge, Polaris continues to steal market share from its larger rival, and there doesn't seem to be anything on the horizon that should impede its ability to grow sales at double-digit rates for the foreseeable future.

Much was made of the improvement in Harley-Davidson's sales picture when they only decreased by half a percent last quarter. The big bike leader still has problems it needs to work through and its outlook is not nearly as bright as Polaris, which is churning out double-digit growth rates.

In the rearview mirror

The Indian brand has matured over the last three years. Polaris is likely to see growth rates slow as the initial excitement over the brand's reintroduction fades and it enters a period where innovative, new models drive sales.

Fortunately, Polaris Industries has been smart. It started off by introducing bikes based on the classics and now it's going after new markets. Both the Scout and Scout Sixty are proving extremely popular entry-level bikes for new riders and those new to the Indian brand. Investors needn't worry about motorcycles, but they do need to watch how the repeated product recalls the powersports vehicle maker has made impact its brands' reputation.