Was the slowdown reported last quarter merely a temporary blip in an otherwise promising long-term growth story or was it something more problematic?

Proto Labs (PRLB 4.22%), the quick-turn manufacturing service provider, is scheduled to report its second-quarter earnings on July 28 before the market opens.

Last quarter, Proto Labs broke its 14-quarter streak of generating record revenue after the company reported that sales grew by 24% year over year to $72.6 million, which increased net income by 2%. Excluding the benefit from Alphaform AG, a German 3D printing service provider Proto Labs acquired in October, its first-quarter revenue increased 16% to $67.7 million.

According to CEO Vicki Holt, "revenue growth from our legacy injection molding and CNC machining services was tempered by a slowdown in industrial production." Prior to this acknowledgment, the industrial "slowdown" that Holt referenced affected the majority of companies that touch the manufacturing industry, but not Proto Labs. In other words, this development revealed that Proto Labs' rapid manufacturing model is not immune to industrial slowdowns.

Not surprisingly, the stock has reacted poorly since the revelation: 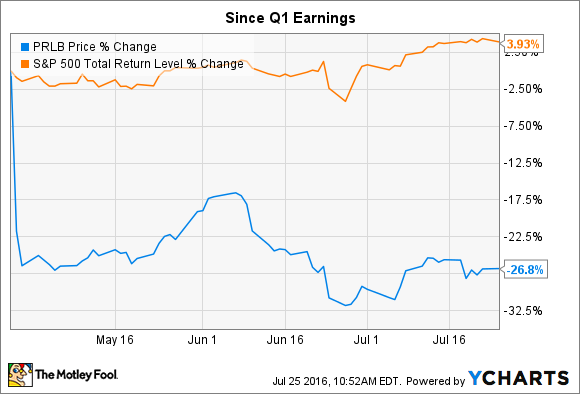 Today, a major question facing Proto Labs is whether the slowdown was merely a temporary blip in an otherwise promising long-term growth story or something more problematic. The following three areas will help investors gain some clarity.

The number of product developers that Proto Labs serves in a given quarter is a proxy for how well the company's manufacturing services are faring the marketplace. Despite non-record revenue, Proto Labs served a record number of product developers – 13,249 – during the first quarter, which represented an increase of 20% annually and 6.7% sequentially. For long-term investors, this figure suggests that even though the company failed to produce record revenue growth, it still managed to increase the acceptance of its manufacturing services.

Although Proto Labs' margins remain healthy, they've fallen rather considerably over the last year, largely because 3D printing is a lower-margin business and is growing faster than the rest of Proto Labs' other businesses, and the company increased its marketing spending to drive sales higher. 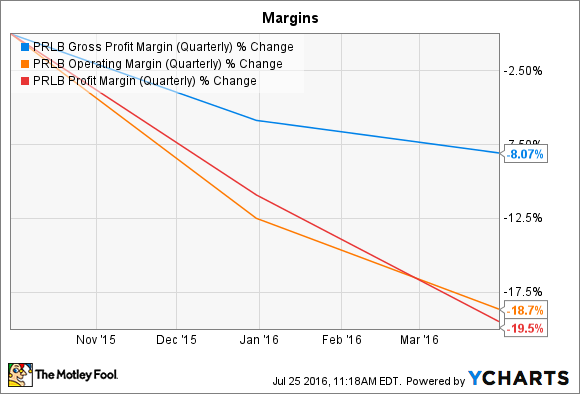 Last quarter, Proto Labs' sales and marketing expenses increased by 23.6%, and represented 15% of its total revenue. If this trends continues without a sufficient bump in revenue growth to offset the decline in profitability, Proto Labs' profits may come under pressure.

Considering Proto Labs has made significant investments to bolster its international presence, it's an important area for investors to watch. Thanks to the benefit of Alphaform, Proto Labs' international revenue increased over 60% to $22 million during the first quarter. Excluding Alphaform and the impact of currencies, revenue in Europe and Japan increased 28% and 2%, respectively.

All eyes on Thursday

Proto Labs' management expects to generate between $75 million and $80 million in second-quarter revenue, which represents an increase of 17% to 25%.