The discount carrier expects its profit margin to decline on a year-over-year basis next quarter -- primarily because of its fuel hedging losses.

A decade ago, fuel hedges were a huge competitive advantage for Southwest Airlines (LUV 1.39%). Between 1999 and mid-2008, Southwest saved $3.5 billion on fuel due to an aggressive strategy of hedging its fuel costs years into the future. Meanwhile, most of its peers didn't have good enough credit to do much hedging.

However, fuel hedges have become a huge liability for Southwest Airlines in the past two years. While there is a light at the end of the tunnel, fuel hedging losses will likely cause the company to report its first year-over-year drop in adjusted profit in several years in Q3. This unwelcome news contributed to a massive 11% decline in Southwest's stock price after it reported earnings last Thursday. 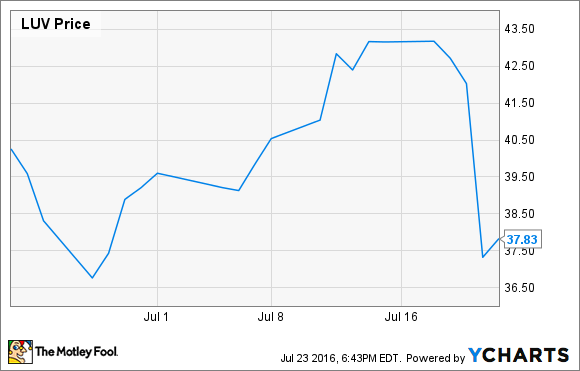 Southwest Airlines earned a record profit last quarter. However, in the past month or so, fares for last-minute bookings have dropped considerably. As a result, the company expects its revenue per available seat mile to decline 3%-4% year over year this quarter. That's about two percentage points worse than its internal forecast from a month ago.

Meanwhile, Southwest expects non-fuel unit costs (excluding profit sharing and special items) to increase 2% year over year in Q3. About half of this increase comes from accelerated depreciation on Southwest's fleet of older "Classic"-generation Boeing 737s after the company decided to retire them by next September.

Unsurprisingly, the combination of falling unit revenue and rising non-fuel costs is crimping Southwest Airlines' margins. While the company affirmed that it expects to post a "strong operating margin in excess of 18 percent" this quarter, that would be down from its adjusted operating margin of 20.3% in Q3 2015.

On Southwest's earnings call last week, Wall Street analysts zeroed in on the projected unit revenue decline. Still, even a 3%-4% year-over-year RASM decline will likely be one of the best unit revenue results in the U.S. airline industry.

Southwest's fuel hedging losses have worsened this year. In the first half of 2016, the company's hedging losses added $0.49/gallon to its fuel cost, driving a total hedging loss of $484 million. This created a 4.7 percentage point margin headwind for Southwest.

Southwest has lost more than $1 billion on fuel hedges in the past 18 months. Image source: The Motley Fool.

Southwest Airlines doesn't expect the losses to moderate in Q3. It has forecast economic fuel expense of about $2.05/gallon this quarter, down only slightly from $2.20/gallon a year earlier. By contrast, its three largest rivals all expect Q3 fuel costs to fall in a tight range of $1.45/gallon-$1.57/gallon.

This suggests that fuel hedging losses will remain a 4-5 percentage point headwind for Southwest's operating margin in Q3. In other words, if Southwest Airlines had not locked in so much of its fuel consumption at above-market prices, it would almost certainly be in position to post another quarter of solid earnings growth and margin expansion in Q3.

Southwest expects its hedging losses to continue into 2017. Last week, Southwest Airlines CFO Tammy Romo estimated that the company is currently on pace to lose $550 million on its 2017 fuel hedges.

Looking beyond 2017, hedge losses should be comparatively negligible, as Southwest has changed its policies to avoid repeating its recent hedging blunders. This represents a substantial earnings growth driver for Southwest relative to its rivals.

The retirement of the 737 Classic fleet in late 2017 and the arrival of extremely fuel efficient 737 MAX aircraft around the same time will drive further cost improvements. Thus, for patient investors, Southwest's recent hedging-related stumble may be a good opportunity to pick up the stock at a bargain price.

Adam Levine-Weinberg owns shares of Boeing. The Motley Fool has no position in any of the stocks mentioned. We Fools may not all hold the same opinions, but we all believe that considering a diverse range of insights makes us better investors. The Motley Fool has a disclosure policy.