The company had lower-than-expected revenue in this first quarter, but this probably won't affect long-term revenue. 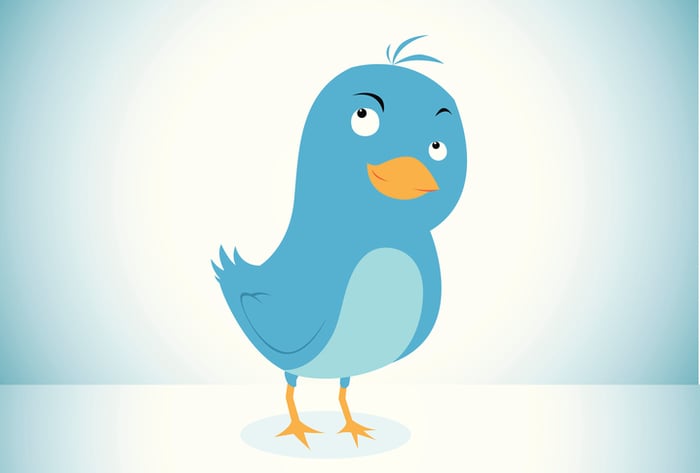 If you've been paying attention to Twitter's (TWTR) stock recently -- or for the past few years, for that matter -- it's hard not to hear criticism about the little birdie. The company's stock is priced less than half of what it was during its IPO, currently at around $18. The company's worth about $10 billion less than from its IPO as well.

The drop in value has coincided with various concerns about Twitter. Monthly active user has grown slowly or stagnated. People have complained about various features -- including the "like" button and timeline changes. Still other users are trying to figure out what Twitter really is.

First-quarter results were disappointing, but should we consider this a reflection of Twitter's long-term revenue growth?

To understand how this affects Twitter's long-term revenue growth, it's first important to contextualize how the company makes money and what's cited as the dip.

Twitter monetizes through three revenue channels: advertising on its platform, advertising on other platforms, and data licensing. Advertising on Twitter makes the company the most money followed by data licensing -- selling tweets as data for companies to analyze consumer trends. Twitter's also beginning to sell ads that contain the Twitter brand on products, apps, and websites.

This is even affecting next quarter's revenue. "Essentially what we expect in Q2, however, is that more of these advertisers will trade up from these legacy brand promoted tweet into promoted video products" says Adam Bain, Twitter's chief operating officer, in an April earnings call. This insight contextualizes why Twitter's Q2 revenue guidance currently sits at $590 million to $610 million, compared with analysts' $677.6 million expectation, Business Insider reports.

This looks bad for the blue birdie. But if we trust their observations about video, revenue will likely return to normal growth -- potentially even higher growth -- in the next few years.

According to Twitter, the advertising industry is entering a period in which video is becoming increasingly valuable. This is affirmed by an eMarketer study in which 51.9% of marketers -- the second highest number of respondents -- believe video content is among the best marketing strategy. The study ranked valued by Return on Investment -- which measures profit in dollars for each dollar put into marketing.

The benefits of video advertisement apply well to Twitter according to initial tests. The company said in its April earnings report that it ran a profitable video test ad with a beverage company. "We saw a $6 return on ad spend for a major beverage manufacturer. So for every dollar that they put into Twitter, it returns $6 back to register. They told us it was best in category." said Bain.

It's significant these ads are best in category, because advertisers generally prefer Facebook (META -1.19%). Another eMarketer study revealed that 95.8% of surveyed marketers believe Facebook is one of the three best social media platforms for ROI. Twitter was second with only 63.5% of marketers.

Therefore, it's not a bad idea for Twitter to focus on a profitable niche in lieu of short-term revenue. That's not indicative of a problem. It's the sign of a company strategically funneling revenue generation into a financially healthier model. If this new video advertising truly is more profitable, company advertising dollars will eventually fly back to the blue bird. Even better, its high ROI could help Twitter steal some of marketer's advertising budgets from Facebook.

But here's the thing: Transitioning to this model requires some patience.

"We think it's going to take time, obviously." Bain said in a June conference presentation. "It's not going to be an instant step change in terms of differential, but there's a really big opportunity ahead on the video side." Indeed, creating video is challenging, with 49.8% of marketers describing video as "difficult to create."

But the difficulty hasn't stopped marketers from trying, as Twitter has noted advertisers are shifting from traditional tweets to video content. The company's also rolling out new tools in the fall -- like demographic targeting and reach and frequency planning -- to further optimize video ads. Plus, the company's greenlighting advertisement to the 500 million Twitter users that access the sight without an account. All these things show the potential for advertisement growth, and this shows the potential for higher revenues.

Twitter has a lot of problems to solve on its path to becoming a strong business again. However, criticizing Q1 revenue and Q2 guidance probably aren't indicative of long-term revenue growth. While it's hard to definitively say how much revenue they'll generate five years from now, signs point to a return to stable, if not higher, growth.

Michael Schramm has no position in any stocks mentioned. The Motley Fool owns shares of and recommends Facebook and Twitter. We Fools may not all hold the same opinions, but we all believe that considering a diverse range of insights makes us better investors. The Motley Fool has a disclosure policy.