Air Methods Corp announced on July 26 that its preliminary second-quarter earnings would fall short of Wall Street analysts' expectations. But based on what the company said, it's a case of management sacrificing some short-term business in order to make the right long-term decisions.

What: Shares of medial air transport and air tourism operator Air Methods Corp (AIRM) are down 10.9% at 1:23 p.m. EDT on July 26, following the company's pre-market announcement of preliminary financial and operating results for its second quarter. 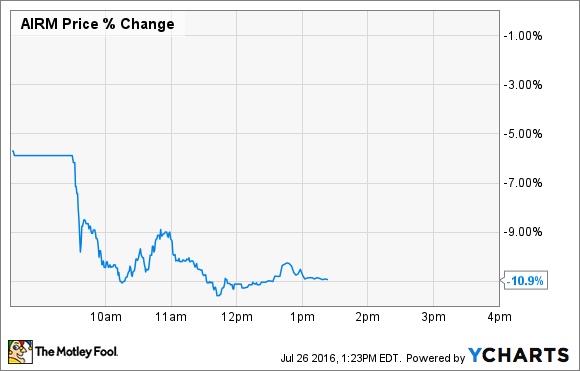 So what: According to the release, Air Methods' revenue is expected to be $293 million, up 11% from $264 million one year ago, while net income from continuing operations is expected to be $0.69-$0.71 per share, or roughly the same as the $0.69 per share in last year's quarter. In short, Mister Market isn't happy with either the revenue growth or the (lack of) earnings growth.

Earnings did not grow in-line with revenue due to accelerated clinical and aviation training related to the Tri-State acquisition, lower tourism passengers, and a $0.5 million loss related to the disposition of aircraft. The accelerated Tri-State training resulted in lower in-service rates and volumes in the quarter, which have reversed in July now that training is mostly complete. In the tourism division, total passengers fell 9.7% in the quarter but have recovered month-to-date in July. Despite these challenges in the second quarter, we remain on track to achieve our financial targets for the year.

Now what: It sounds like the company prioritized training over some short-term profit and revenue goals, following the acquisition of Tri-State Care Flight in January, and that was one of the key reasons for the quarter's stagnant earnings growth.

At the same time, though, the company reported weaker results in its tourism division in the quarter, so this bears watching. In late June, the company announced two leadership changes in its tourism segment, appointing David Doerr to the newly created position of president of the division, and promoting Jim Greiner to president of Sundance Helicopters, the company's air tourism business operating in Las Vegas and the Grand Canyon. Whether the management shuffling in the tourism division pays off or not will take some time to prove out, but it's probably a good sign the company is adding executive resources to direct the segment.

Bottom line: Today's market reaction is pretty short-term in nature. No, it's not great that the company is telling us that earnings will fall short of expectations, but the underlying reasons seem to be based on the short-term impact of actions that will strengthen the company in the long term.

Looking for more? Check back on August 4 after market close, when Air Methods reports its full financial results for the second quarter.

Jason Hall has no position in any stocks mentioned. The Motley Fool recommends Air Methods. We Fools may not all hold the same opinions, but we all believe that considering a diverse range of insights makes us better investors. The Motley Fool has a disclosure policy.