The Wynn and Encore in Las Vegas. Photo: Wynn Resorts

During an investor day in April, Wynn Resorts (NASDAQ:WYNN) CEO Steve Wynn told investors, "There will always be that 40-odd million people here. What I'm saying is . . . I want to give them something to do. I don't give a damn if they put a nickel in the slot machine. I want them to pay my admission. I want them to stay in my rooms. I want them to drink my booze and eat our food . . ."

This is how he introduced what will be the biggest development his company has undertaken in Las Vegas in almost a decade. The project, as of now called Paradise Park, is expected to cost around $1.5 billion and will replace the 18-hole golf course at Wynn-Encore, the company's flagship resort, with a giant clear-water "lagoon", another hotel tower, and much more. Here's what Paradise Park will look like, and what investors need to watch as the development gets under way.

Wynn's paradise in the desert

The plans for Paradise Park come with all of the grandeur expected of Steve Wynn and his investments. The main draw of the development will be a 38-acre lagoon built by a South American company called Crystal Lagoon. The water will be clean for swimming with white-sand beaches all around the one-mile perimeter and a small island in the middle. 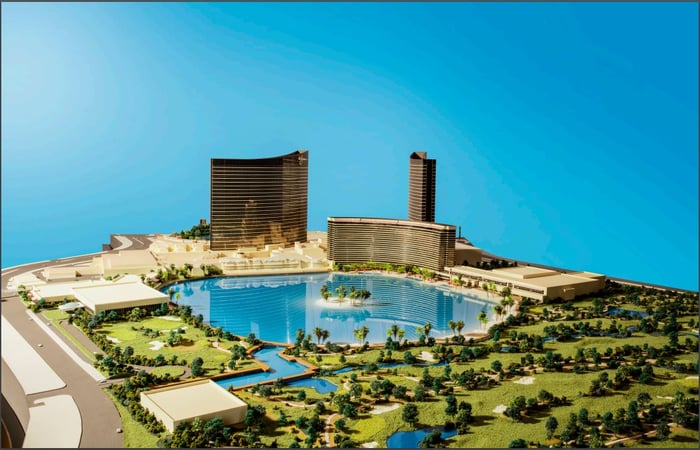 While a 38-acre pool in the middle of the desert sounds like an ecological disaster, the technology implemented allows the lagoon to use 30 times less water than a typical 18-hole golf course of the same size, and this lagoon will be far smaller than the 18-hole course it is replacing. It also uses up to 100 times less chemicals than swimming pools with an ultrasonic filtration system that uses up to 50 times less energy than conventional filtration systems.

The 18-hole golf course should close this fall, replaced by a 9-hole course, and construction of Paradise Park will begin this year pending board approval. If all goes according to plan, Paradise Park will open to the public in 2020.

Wynn noted that they would likely charge an admission fee for guests not staying at the hotel (and add to the "resort fee" already charged to hotel guests) saying, "Who gives a damn about a $25 or $20 bill today when a show in this town costs $110. We could stay under $50 and be the greatest bargain in the whole Strip."

Why Wynn is betting on non-gaming growth

According to the Las Vegas Convention and Visitor Authority (LVCVA) 2015 Las Vegas visitor profile, survey respondents spent on average more on gambling than any other segment at nearly $422 during a single trip. However, they spent an average of $292 on food and drink, $172 on hotels, and nearly $200 on other entertainment. Altogether, visitors spent about $1,166 while in Las Vegas, only about a third of which was on the casino floor.

During the most recently reported quarter, Wynn said that about a third of its $389.4 million of Las Vegas revenue was attributable to gaming, about flat compared to the prior year. Instead, hotel, food and beverage, and other non-gaming revenue growth is now the focus -- segments that Paradise Park should help bolster significantly.

And the hotel business is growing the fastest. Revenue per available room (RevPAR) rose to $243 from $235, leading to overall hotel sales growth of 5.5% year-over-year to $105 million. Wynn-Encore has a combined 4,748 rooms. Steve Wynn says that a rising number of visitors to Las Vegas, up to a record 42.3 million in 2015 and expected to continue rising, will increase demand enough for the added 1,000 rooms included with Paradise Park.

But so is the competition

Local competition is also focused on non-gaming entertainment in Las Vegas and could be a risk to the success of Paradise Park. MGM Resorts International (NYSE:MGM) recently opened a 20,000 seat arena that will house concerts as well as Las Vegas' recently awarded NHL team. MGM is very focused on increasing its non-gaming appeal with this arena and other attractions all along the Strip.

Even more ominous than MGM might be Resorts World Las Vegas -- Malaysian company Genting is constructing the property directly across the Strip from Wynn-Encore. The Asian-themed resort, which is expected to open in 2018, will feature 3,500 hotel rooms across multiple hotels along with many other attractions.

However, one competitive advantage Wynn has is water rights from the city of Las Vegas, which has been used for its golf course. The only other resort with similar water rights is the Bellagio (owned by MGM) for its fountains. This means that no other resort on the Strip is likely to have anything similar to the lake attraction the casino mogul envisions.

Will the bet pay off?

Wynn's grand Paradise Park vision still needs to be approved by the company's board of directors before construction can begin. If it does win approval, the project could be a major boon for Wynn's Las Vegas operations. Telsey Advisory Group analysts predicts that Wynn's 18-hole golf course generates EBITDA of $5 million annually, while Paradise Park could increase that to $300 million to $400 million. With a move toward non-gaming operations already under way, Wynn's new development looks like a great bet.

Editor's note: a previous version of this article incorrectly referred to a 72-hole golf course attached to the Wynn-Encore resort. The course is actually 18 holes (par 70).