Valero maintained strong operational results even though the market for refined petroleum products didn't do it many favors this quarter.

There are two ways you can look at Valero Energy's (VLO -0.58%) second-quarter results. In one view, the company's earnings took a large drop from this time last year that signals that the refining industry is going through some tougher times. In the other, Valero did a great job of doing the one thing it can control, maintain strong operational results. If you are a long term investor, then it's the latter that you should really care about. Let's take a quick look at Valero's recent results and see how the company held up in a tougher refining market and what it's doing to improve its operations for the future.

Valero's earnings for the second-quarter were $814 million, or $1.73 per share, a 35% decline from the same quarter last year. This quarters earnings also included an after-tax benefit of $311 million related to a favorable inventory reevaluation. If we strip out this one time gain, net income for the quarter was $1.07 per share. Despite the decline, Valero beat expectations on both a GAAP and normalized EPS basis.

It shouldn't come as too much of a surprise that Valero's earnings were considerably lower than this time last year. In the second-quarter of 2015, refining margins were at some of their highest levels in a long time. This was especially true in the US Gulf Coast region where Valero has the bulk of its refining capacity. 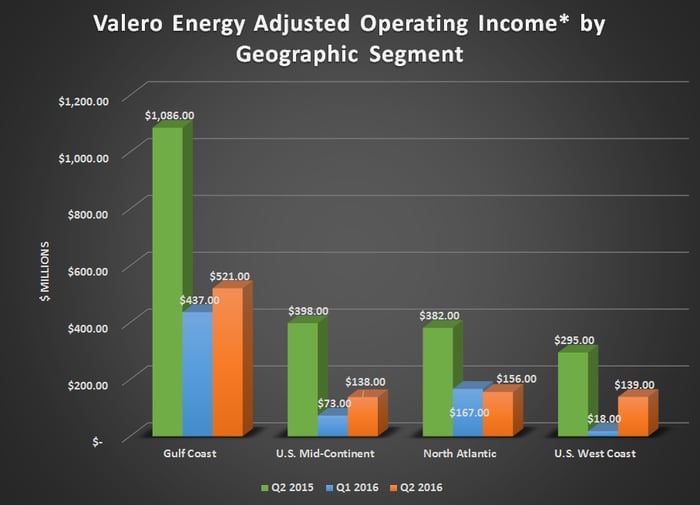 It can be easy to focus on the negative that is refining margins, but that is by and large out of the control of the company. From an operations perspective, the company performed very well. Valero's refinery utilization rate remained very high at 94% and actually reduced operational expenses per barrel produced from $3.66 per barrel last year to $3.51 per barrel. That may not sound like much on paper, but that can really add up when the company processes 2.83 million barrels of crude a day.

From a cash flow perspective, Valero generated $2.3 billion in operational cash. This is pretty much in line with last years cash flow results, which is pretty impressive when you consider the differences in net income. Chances are that it has to do with some changes to working capital that put a little more cash in the coffers this quarter. In the quarter, capital expenditures were $461 million. Valero also used some of that cash to buy back 7.5 million shares of its own stock for $401 million. Over the past 5 years, the company has gotten into the habit of buying back a lot of stock that has led to a pretty significant reduction in shares outstanding. 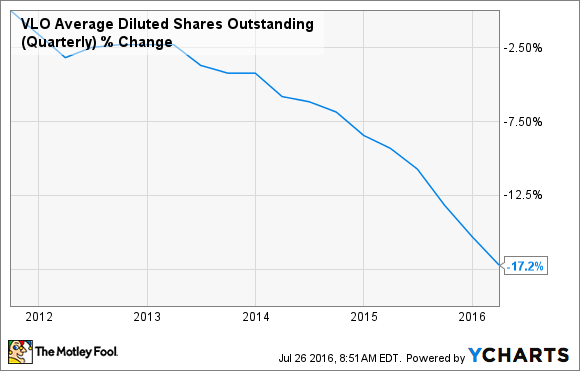 There were two big events that happened with Valero this past quarter. The first was the acquisition of the remaining 50% stake in the Parkway Pipeline from Kinder Morgan. The refined product pipeline is the link between Valero's St. Charles refinery in Louisiana to Kinder Morgan's larger Plantation pipeline that delivers refined products from Louisiana to Virginia and serves the entire Southeast United States. Valero also plans to build a link to the Colonial Pipeline, a competing refined product pipeline in the same region.

The other major announcement for the quarter was that the company has completed construction of its 90,000 barrel per day expansion of its Houston refinery. The facility started up in June, so we're much more likely to see the full benefit of this project in the coming quarter. It should also help to boost Valero's refined product exports from the Gulf, which reached a record of 396,000 barrels per day for the quarter.

While the company doesn't give any guidance in its press release about the coming quarter, the company did say that it expects to spend $2.6 billion in capital spending for the year, of which $1 billion will be used for optimization and to build out more logistics assets that can then be dropped down to its subsidiary partnership Valero Energy Partners (NYSE: VLP).

Valero's overall results might not look great compared to this time last year, but the company's ability to keep its refineries running at a high rate and reducing operational expenses was likely a big factor as to why the company was able to beat expectations. Regardless of what refining margins do in the coming quarters, it will be worth watching to see what kind of gains the company can achieve from the ownership of the Parkway pipeline as well as whether it can maintain its strong operational performance as it brings on its new crude unit.

The Motley Fool owns shares of and recommends Kinder Morgan. We Fools may not all hold the same opinions, but we all believe that considering a diverse range of insights makes us better investors. The Motley Fool has a disclosure policy.