Lower production compared to the prior quarter and a little less help from refining and marketing contributed to the reversal of Statoil's fortunes.

After posting a profit last quarter that came as a pleasant surprise, Statoil ASA (EQNR 0.08%) wasn't able to keep the momentum going this quarter as it fell back into the loss column. Despite the lackluster results, the company did show some slightly promising signs as it continues to cut costs and focus on getting the most out of its existing portfolio rather than trying to grow its way out of trouble. Here's a quick snapshot of what happened at Statoil this past quarter.

It's a little discouraging to see Statoil's results slip from the prior quarter while there are several signs from the oil and gas market that would suggest things should be getting better for producers. Even though the company's realized price for oil and gas improved from $29 per barrel of oil equivalent (boe) to $39 per boe, the company's overall production declined by 100,000 boe per day. That much production offline and a minor dip in downstream earnings was enough for the company to fall back into the red. 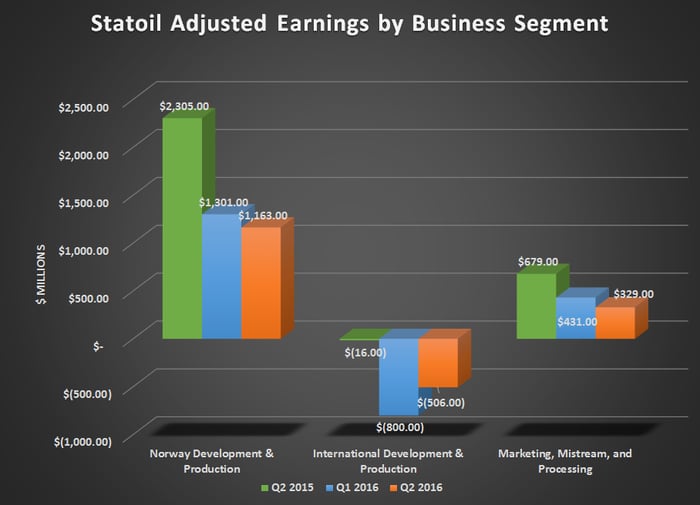 The good news that can be pulled from this past quarter is that production costs continue to decline and the company appears to be right sizing its capital spending. Production and exploration costs declined by about $350 million compared to this time last year.

Not much has changed since the company had its annual shareholders meeting back in May, but CEO Eldar Saetre wanted to remind investors that the company is looking to drive value to shareholders not through large production increases, but through capital discipline and cutting operational expenses at its existing assets:

We maintain our production guidance, expecting annual organic production growth of around 1% from 2014 to 2017. Strict prioritisation, good results from our improvement programme and more effective drilling operations allow us to lower our 2016 capex and exploration guidance.

Statoil took a couple of hits on the path toward greater profitability this quarter, but the company is keeping its head down and focusing on keeping its capital budget in check and cutting operational costs. The company may be considered an integrated oil and gas company, but it's heavily weighted toward exploration and production, so the biggest cure for what ails Statoil right now are higher oil and gas prices.

The Motley Fool recommends Statoil. We Fools may not all hold the same opinions, but we all believe that considering a diverse range of insights makes us better investors. The Motley Fool has a disclosure policy.

Equinor's Recovery Is in Full Swing
358%